Editor's Note: This is the Pro article of a two-part Pro/Con Expert Analysis. Click here for the Con article.

For over a decade, some cardio-oncology experts have used the terms "Type I" and "Type II" to describe patterns of cardiotoxicity that can arise from use of cancer therapies. Unfortunately, despite the growing evidence that this categorization is both incomplete and fundamentally incorrect, the terms continue to be used both in practice and in the literature. The purpose of this article is to critically examine the major flaws in the "Type I versus Type II" characterization scheme.

Flaw 1: The Subtext to the Definition of Type II Toxicity Is Untrue

The terms "Type I" and "Type II" cardiac dysfunction were first proposed in 2005, in an editorial published in Journal of Clinical Oncology.1 The authors noted that the toxicity of the "relatively new" agent trastuzumab "revealed true clinical and mechanistic differences between the cardiac effects of trastuzumab and those of anthracyclines." As such, the manuscript proposed that anthracycline toxicity be characterized as Type I, whereas toxicity "exemplified by trastuzumab cardiac effects" would be characterized as Type II.1

The authors then proposed the differences between Type I toxicity ("myocardial damage") and Type II toxicity ("myocardial dysfunction"), emphasizing the purported irreversible nature of the former versus the reversible nature of the latter. Type I toxicity was noted "to be permanent and irreversible... [with a] high likelihood of sequential stress related cardiac dysfunction." Type II toxicity was deemed to have a "high likelihood of recovery to or near baseline cardiac status in 2-4 months... [with a] low likelihood of sequential stress-related cardiac dysfunction."1

More than a decade since these proposed terms were introduced, this hypothesis has proven to be false. A series of studies have demonstrated that the long-term sequelae of trastuzumab toxicity were originally underestimated, especially in the real-world setting. 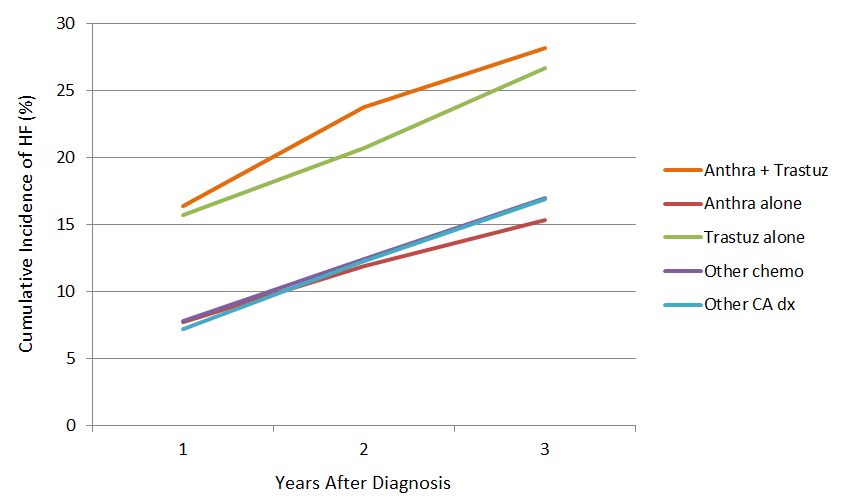 HF incidence in patients with breast cancer based on treatment with anthracyclines (Anthra alone), trastuzumab (Trastuz alone), both (Anthra + Trastuz), or neither (Other chemo). Patients treated for other malignancies (Other CA dx) are included as controls. Data adapted from Chen et al.3

Further studies revealed similar results. A study of nearly 10,000 patients with breast cancer treated with chemotherapy revealed an increase in the risk of HF from 18.9 to 29.4% when trastuzumab was administered; once again, the stratification among the four groups (+/- anthracyclines, +/- trastuzumab) revealed that trastuzumab administration was the main risk-factor for the subsequent development of HF.5

Cardiovascular toxicity from trastuzumab has profound consequences. A study of over 3,000 women who received adjuvant trastuzumab revealed that when trastuzumab was stopped after 1-8 doses due to cardiotoxicity, both the risk of HF/death (HR 4.02) and the risk of clinically significant relapse/death (HR 3.09) were much higher.6

In summary, the evidence of the past decade has consistently revealed that trastuzumab toxicity is at least as clinically meaningful as—and probably more meaningful than—anthracycline toxicity for patients with human epidermal growth factor receptor 2 (HER2) positive breast cancer. In addition, trastuzumab cardiotoxicity is not simply transient/reversible but has clinically important long-term sequelae and effects on hard outcomes. As such, much of the theoretical distinction between "Type I" and "Type II" toxicity has proven to be false.

Flaw 2: There Are Far More Than Two Types of Important Cardiotoxicity

The world was a different place in 2005. Flip-phones were state of the art, with the debut of the iPhone a full 2 years away.7 Facebook was in its nascent stages, with the ability to open accounts not yet available to the public. The world of "cardio-oncology" was simple, with clinically important toxicity largely limited to two classes: anthracyclines (like doxorubicin) and HER2 inhibitors (trastuzumab). In such a world, classifying cardiotoxicity into only two types made perfect sense. In the modern day, however, it makes no more sense than using a flip-phone to access one's MySpace page.

As specifically stated in the editorial that defined the terms "Type I" and "Type II" toxicity, trastuzumab toxicity was only the second main toxicity type that had been described for cancer therapies.1 However, the world of cancer therapies and cancer-therapy-associated-cardiotoxicity has markedly changed in the intervening years. Taken conservatively, there are at least 9 classes of current cancer therapy agents causing distinct patterns of cardiotoxicity. If the goal of classifying toxicity into types is to group all agents with similar mechanisms and toxicity characteristics, the following would be an example of how such a scheme could look:

Clearly, the above system would not simplify the understanding of cardiotoxicity of cancer therapeutic agents for any practitioner. Yet the proposed alternative, lumping all cardiac toxicity into "Type I" (anthracyclines) and "Type II" (everything else) terminology, is simply wrong. As an example, in recent imaging guidelines published in European Heart Journal, the authors defined Type I toxicity to be anthracyclines and Type II toxicity to be HER2 inhibitors and VEGF inhibitors.15 Given that HER2 inhibitor toxicity (left ventricular systolic dysfunction – common) and VEGF inhibitor toxicity (hypertension/vascular dysfunction – common; severe/idiosyncratic HF – uncommon) share neither mechanistic nor phenotypic similarities, grouping them under the same toxicity term serves to confuse rather than simplify. If we further extend the "Type I" and "Type II" classification scheme to its logical conclusion (Type I being anthracycline cardiotoxicity and Type II being everything else), the classification becomes meaningless.

The past decade has seen an enormous growth in cancer therapeutics for a wide variety of malignancies. Although the new therapies have resulted in markedly improved cancer outcomes, many also have the potential for cardiotoxicity.16 The toxicities are extremely varied, from left ventricular systolic dysfunction (anthracyclines, trastuzumab), to hypertension (VEGF inhibitors), to thrombosis (Bcr-Abl inhibitors), to vasospasm (5-FU), to myocarditis (checkpoint inhibitors), to atrial fibrillation (Bruton's tyrosine kinase inhibitors). The original characterization lumping cardiotoxicity into two types suffered from two fatal flaws: understating the severity of HER2 inhibitor toxicity and not accounting for the host of toxicities from newer agents that do not fit into either box. The terms "Type I" and "Type II" toxicity should be abolished.

YOU ARE HERE: Home > Latest in Cardiology > Type I and Type II Cardiomyopathy Classifications Are Complete Nonsense: PRO