The poll results are based on the clinical vignette of a 73-year-old woman who presents to your office with stage D NYHA class IV, non-ischemic cardiomyopathy, on maximum tolerated goal-directed medical therapy, with further dose escalation limited by hypotension.

We asked the question, according to the most recent ISHLT guidelines, which of the following statements is true regarding this patient's candidacy for heart replacement therapy? 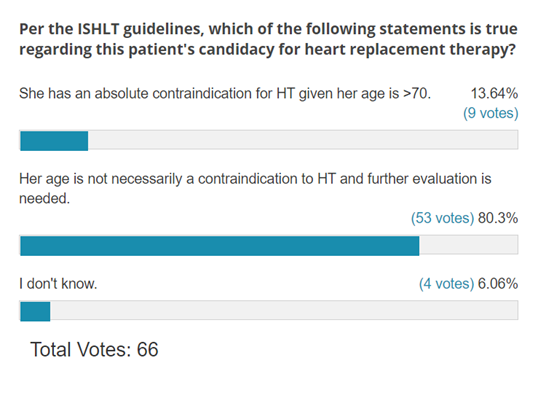 The majority (80.3%) of respondents answered the poll with the intended correct response, selecting that the patient's age was not necessarily a contraindication for heart transplantation (HT). Notably, 13.6% of respondents selected that her age of 73 was an indeed absolute contraindication to HT. We believe that further evaluation to consider factors such as her medical comorbidities and functional status may more completely inform her candidacy for HT despite her advanced age.

The International Society for Heart Lung Transplantation (ISHLT) guidelines state that patients should be considered for cardiac transplantation if they are ≤70 years of age (class I, level of evidence C).1 As such, numerous transplant centers around the country have applied this criterion as a relative contraindication to HT for patients >70. Despite this, with the increasing number of advanced age patients with heart failure over time, the incidence of cardiac transplantation in patient >70 has steadily risen, with 8% of patients transplanted in 2010 in this age range.2 In 2012, Goldstein et al. reported outcomes for cardiac transplantation in 332 recipients >70 years of age in the United States, reporting a median survival of 8.5 years among septuagenarians compared to 9.8 years in sexagenarians (p=0.003).2 Although septuagenarians had worse survival than their younger counterparts, they still gained a survival benefit with HT, living for a median of 8.5 years. Given results such as these as well as those from other smaller case series showing benefit in older patients, ISHLT has since added to the guidelines that patients >70 may be considered for cardiac transplantation (class IIb, level of evidence C).3-5 Initially these guidelines suggested the use of a distinct program with older donors being allocated to older recipients, however this was deemed unnecessary in the latest 2016 update.1