Going Solo: How One Cardiologist Did It All in Patan Hospital, Nepal

In April 2018, Noelle Garster, MD, and I went to Nepal for a month-long rotation at Patan Hospital, one of the largest teaching hospitals in the country. Due our shared interest in cardiology, we were introduced to Sachin Dhungel, MD, who arrived a few months before us from Chitwan. As the first cardiologist recruited to Patan Hospital, he was singularly responsible for establishing the department and planning the facilities – literally, from the ground up. As someone accustomed to the ample resources available in the U.S., it was difficult for me to imagine how this could be done without significant ancillary support.

In addition, being the sole expert for all aspects of cardiology services in the hospital seemed impossibly daunting. Yet, despite the challenges and workload he faced, I never saw Dhungel lose his composure or indeed his dry sense of humor. Over the next few weeks, Dr. Dhungel selflessly took us under his wing and taught us what he knew. In turn, I witnessed firsthand the burgeoning of his nascent, multifaceted practice and learned what it took to provide the specialized care that so many patients needed. 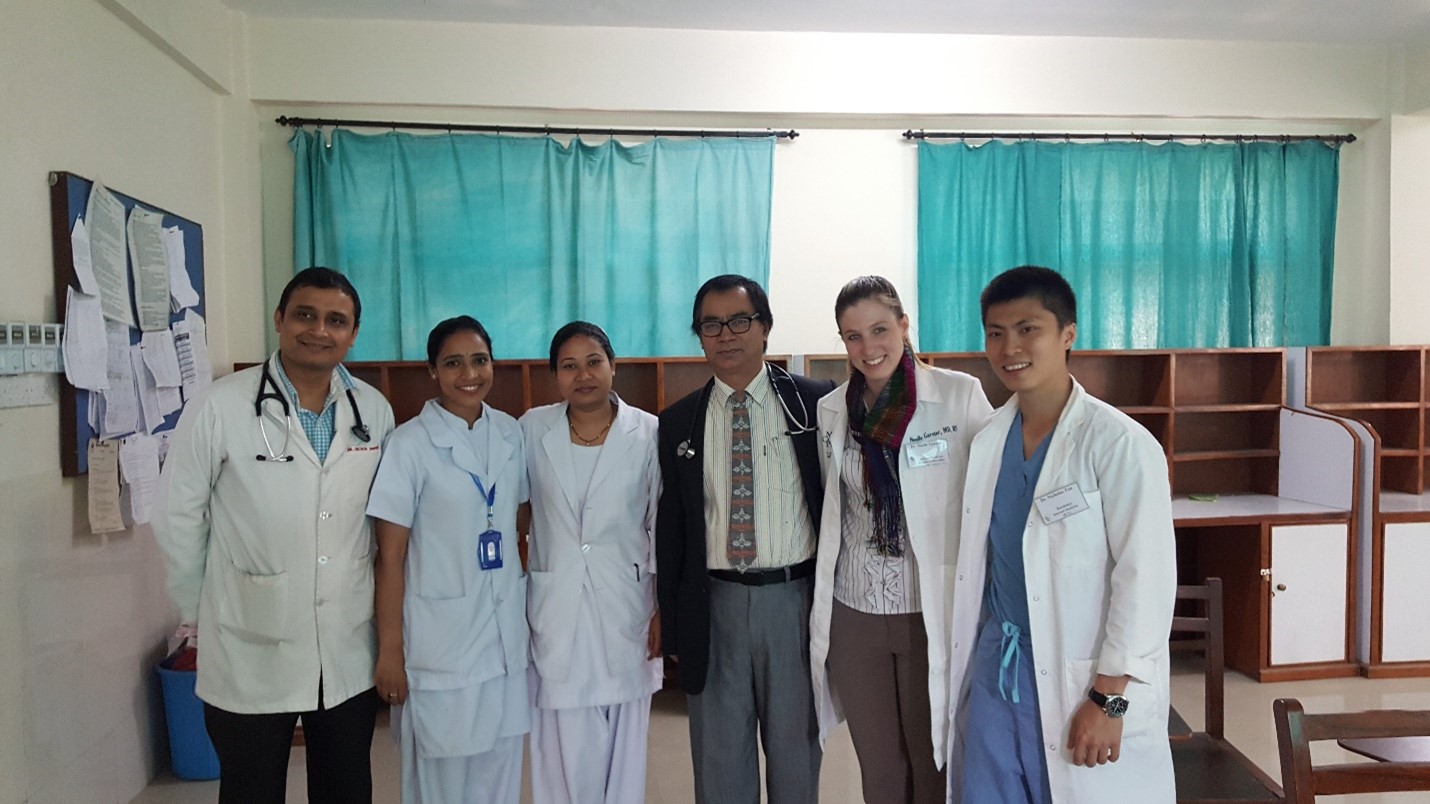 The Echo Room
Down the corridor beyond the inpatient wards was a relatively spacious room that housed the hospital’s echo lab (or “echo room” as it was known). It contained a Phillips echocardiography machine, examination table and desktop. There was a seemingly never-ending demand for echo studies. Before the lab would open for the morning, the hall would already be lined with patients waiting for their turn. Adults, children and infants – he scanned them all. Like clockwork, patients would enter the room and position themselves at the table. Dhungel performed the study, while Krishna and Asmita (nurses trained by Dhungel to work in the lab) compiled the images and report. Once the documents were printed and handed to the patient, the next was swiftly ushered in. With the sheer number of scans being done, Dhungel’s wrist must have been protesting to no end, but never once did I hear him utter a word of complaint.

On occasion, Dhungel would receive a call from the hospital regarding requests for urgent studies. Once, house staff brought in a baby from the neonatal intensive care unit (NICU) who was in respiratory distress. Using a pediatric probe, Dhungel swiftly but calmly performed the echo with the baby still in the incubator. He gave the house staff a few words of advice in Nepali before they went back to the NICU. Once done, the echo lab resumed its business as per normal.

On relatively slower days, Dhungel would allow me and Noelle to scan his patients. I fumbled with the probe and most of the controls during my initial attempts, but he never lost his patience with me. 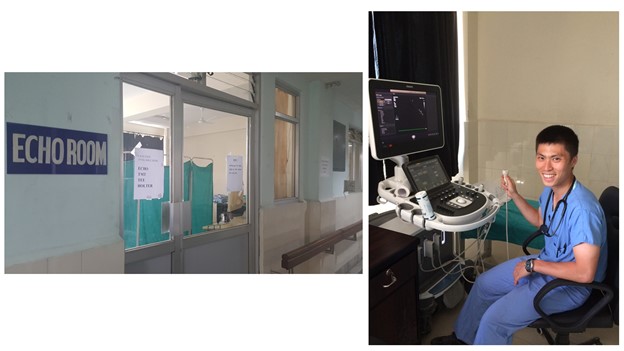 Left: Outside of echo room. Right: Posing with the echocardiography machine at the end of the day.

The Cath Lab
Dhungel had one room equipped for invasive cardiac procedures, where I observed him perform (among others) a cool renal artery angioplasty in a patient with Takayasu’s arteritis. Knowing my interest in electrophysiology, Dhungel also shared a case from several weeks back, where a patient presented with several fainting episodes. He hooked up and read the patient’s Holter monitor, where a period of complete heart block was revealed. He subsequently implanted the patient’s permanent pacemaker – a first for Patan Hospital. 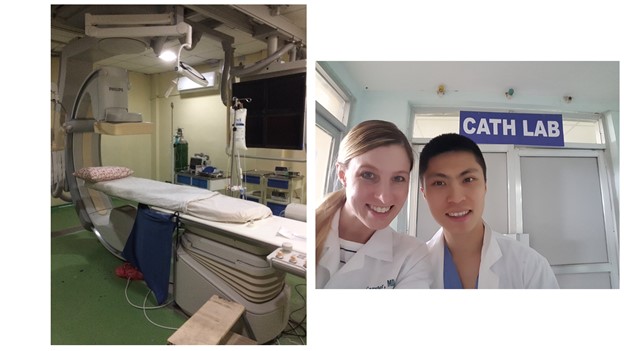 Clinic and Inpatient Consults
Dhungel’s temporary clinic was tucked behind the bustling admissions area. Essentially a closet, there was room for two chairs, a desk and stacks of records on a shelf. Patients would wait either just outside the office or along a bench in a separate holding area – it was sometimes hard to tell when the stream would end. Even with the busy schedule, he never seemed like he was in a rush with them.

Even on clinic days, Dhungel’s inpatient duties did not stop. Soon after wrapping up clinic one morning, he was called to see a young patient in the ICU who was in shock. Using the unit’s handheld ultrasound scanner, we visualized severe generalized hypokinesis, possibly secondary to myocarditis. 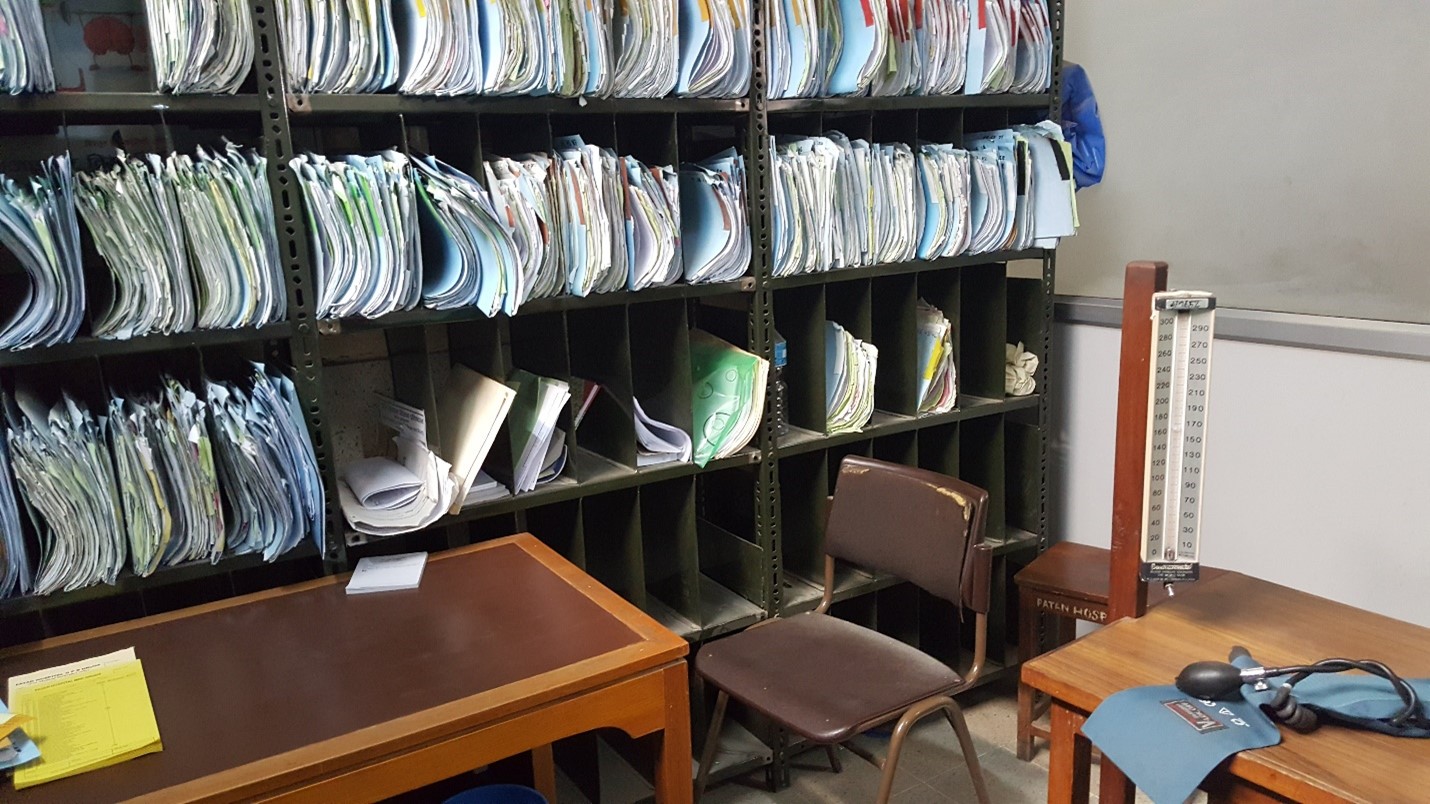 Education
Mornings began with the house staff’s report on new admissions to the consultants. Cases were discussed in a rapid-fire mix of English and Nepali. Us visiting trainees often had difficulty keeping up, but even we could tell when the “grilling” grew intense. In the afternoons, teaching conferences were held for the house staff, where again their knowledge was firmly tested. Dhungel placed a strong emphasis on the physical examination and electrocardiogram during these sessions, knowing that mastery of these tools was essential when specialized tests and equipment are lacking. Mercifully, he spared me from his interrogations, but I made sure to pay attention just in case.

Morning conference with the house staff.

Teatime
During our midday breaks, Dhungel would often take us to a nondescript teashop near the hospital’s entrance. Despite its location, it was strategically hidden from the public eye and maintained a modicum of peace amidst the bustle of the crowds. There, we would sip on cups of chiah (spiced tea) and engage in idle chatter or simply savor the quietness around us. Before long, it was time for Dhungel to return to his duties, and into the tempest we returned.

Epilogue
It has been a couple of years since we left Nepal, but memories of my time at Patan often fill my mind, along with a sense of nostalgia. Dhungel has become a particularly important role model for me – for in him, I saw what one can achieve in our field with ingenuity, grit and an abundance of generosity even in the face of limited resources. Technological advancements of our times notwithstanding, “old-fashioned” mentorship remains a quintessential aspect of cardiology training across the world. Exemplars like Dhungel have opened my eyes and shaped my progress in medicine. Hopefully, I can do the same for my juniors when the time comes.

Noelle Garster, MD, is now assistant professor in the Division of Cardiology at the Medical College of Wisconsin in Milwaukee, MI. 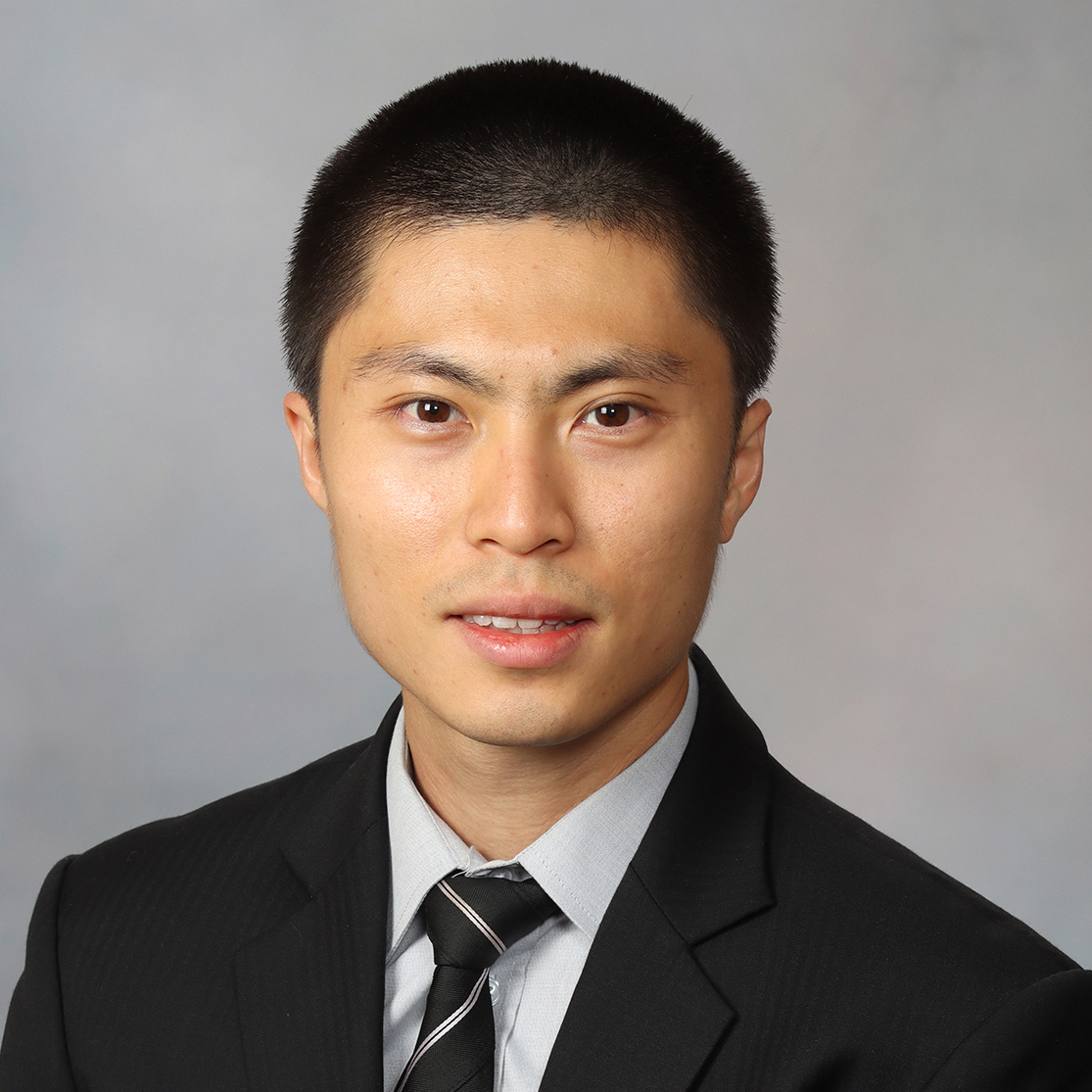 YOU ARE HERE: Home > Membership > Member Sections > Fellows in Training Section > Section News > Going Solo: How One Cardiologist Did It All in Patan Hospital, Nepal