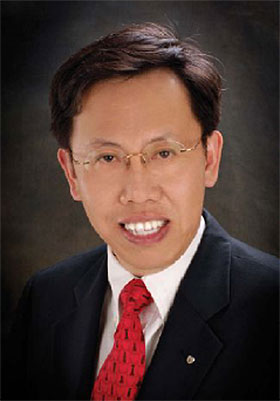 In addition to a recent appointment as a Senator of the Parliament of Malaysia, Kui Hian Sim, MD, FACC, has also been named president of the Sarawak United Peoples’ Party, a political party in Malaysia. Aside from a busy political career, Sim was actively involved in the formation of the Malaysia Chapter of the ACC, of which he has been the Governor since its inception in 2009.

Before he become involved in Malaysian politics, Sim was at the forefront in bringing cardiovascular advancements to Malaysia. He established a world class cardiac center in Sarawak, providing cardiac care to Malaysians and ridding the need to travel overseas. Soon after, the Clinical Research Centre, which Sim founded at the Sarawak General Hospital, became the pioneer for cardiac computed tomography, with a program that physicians worldwide benefitted from.

Sim has used his tagline “Speak less, do more. Prove your sincerity by action,” to help grow the ACC Malaysia Chapter to 128 members. “The ACC’s commitment to Malaysia and Asia started in the 1970s, and the Malaysia Chapter was created through a partnership with the National Heart Association of Malaysia,” said Sim. “Since the establishment of the Chapter, there has been tremendous membership growth in Malaysia. With the significant increase in membership, we hope to be more active in pursuing and sharing in the objectives and purpose of the Chapter in coming years by providing clinical education opportunities, networking with colleagues in Malaysia, being the champion of the quality care initiatives, helping influence national legislative and regulatory efforts affecting our practice and our patients.”