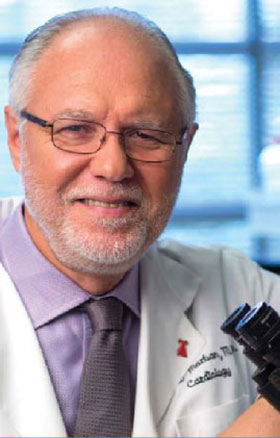 3 Distinguished Scientists | While many of his undergraduate peers were pursuing pre-med degrees in biology and molecular genetics, Eduardo Marbán, MD, PhD, FACC, took a less strategic approach, majoring in mathematics. Regardless of where he started, practicing medicine was always the end goal for Marbán, who has since become one of the most prominent cardiologists in the nation, serving for 25 years at Johns Hopkins University School of Medicine – working his way up from intern to chief of cardiology – and is currently the director of Cedars-Sinai Heart Institute in Los Angeles, CA.

Among Marbán’s myriad of honors and accomplishments, perhaps the most influentially significant is having successfully used the stem cells from a patient’s own heart to regenerate and repair seemingly irreversible tissue damaged by a heart attack. “The standard teaching with a heart attack has been that it’s not possible,” says Marbán. “However, we found that when you give patients who have had a heart attack stem cells from the heart, the scar shrinks and the amount of living heart muscle increases.”

With his research progressing into a phase two, 300 patient, randomized, placebo controlled, double-blinded study, Marbán believes that there isn’t any reason why the paradigms that he’s developed in the heart couldn’t be translatable to other organs.”It’s exciting because obviously it raises a whole lot of therapeutic applications in cardiology, but it also raises the general prospect that some of these settings might be where we can also coax the body into rekindling its own repair mechanisms,” he says.