Left ventricular mass (LVM) is a well-established measure that can independently predict adverse cardiovascular events and premature death.1-3 Population-based studies have revealed that increased LVM and left ventricular hypertrophy (LVH) as assessed by two-dimensional (2D) M-mode echocardiography measurements provide prognostic information beyond traditional cardiovascular disease (CVD) risk factors.4-6 In the pioneering Framingham Heart Study, after adjusting for age and traditional risk factors, the relative risk for coronary disease per 50 g/m increment in LVM was 1.67 in men and 1.60 in women.4 Similarly, in the Cardiovascular Health Study's elderly cohort, the multiple-risks-adjusted hazard ratio for the highest quartile of gender-specific LVM was 3.36 compared to the lowest quartile.5 Additionally, a low traditional CVD risk profile in young adults has been associated with lower LVM and, consequently, lower CV morbidity and mortality.7 Therefore, LVM has been touted as a suitable measure for CVD risk stratification and a marker for subclinical disease.4,8 Moreover, the regression of LVH in patients with hypertension treated with antihypertensive medication, or after aortic valve replacement in patients with severe aortic valve stenosis, has been associated with improved CVD outcomes.9,10

LVM is strongly influenced by body size. However, even after adjustment for anthropometric variables, males have larger LVM than females.11 Similarly, athletes have increased LVM compared to nonathletes,12 and black men and women have larger LVM than their white or Asian counterparts.11,13 Likewise, obesity is associated with increased LVM. The aforementioned body size- , ethnic-, and exercise-related factors are associated with increased LVM, as well as proportional increases in left ventricular (LV) volume, which initially maintains normal LV wall stress.12 Consequently, LV relative wall thickness (RWT), defined as the ratio of twice the LV inferolateral wall thickness to the LV internal diameter measured at end-diastole, initially remains unchanged. Other factors to be considered are age and blood pressure.

Normal values for LVM are derived from studies of the general population without hypertension or obesity.12,14 Separate cutoff values for body size-adjusted LVM have been used for men and women.12,15 In order to allow comparison of LVM among subjects of different body sizes, different allometric approaches have been suggested to normalize LVM.14 However, there is controversy about the best method for indexing LVM.

Body surface area (BSA) was the first anthropometric variable used to index LVM and has shown a stronger statistical correlation than height with LVM16 and better identification of hypertension-related LVH.17 However, indexing by BSA has been noted to minimize the effect of obesity on LVM, and, therefore, it underestimates the prevalence of obesity-related LVH.18 Consequently, height has also been used for indexing (either height alone or height raised to an allometric power of 1.7 or 2.7).15,18-20 Indexation of LVM to height raised to an allometric exponent of 2.7 (LVM/height2.7), in comparison to BSA or height alone, has shown better predictive value for CVD outcomes, better detection of obesity-related LVH, and less variability of LVM among normal individuals.19,21 Chirinos et al. demonstrated that indexation to LVM/height1.7 was the best method, in comparison to BSA and height2.7, to identify obesity-related LVH and was more consistently associated with CVD outcomes and all-cause mortality.15 In a population with a low prevalence of obesity, there was no significant difference in the risk attributed to LVH regardless of the method of indexation.20 BSA has been widely adopted by the American Society of Echocardiography (ASE) and European Association of Cardiovascular Imaging as the preferred method for indexing LVM.14

Given the clinical importance of LVM, it is essential to have a reliable method for its estimation. Echocardiography offers a reliable, noninvasive, rapidly available, and relatively inexpensive method for estimation of LVM. Regardless of the method used, LVM estimation is derived by converting myocardial volume to mass by multiplying the volume by the myocardial density of 1.05 g/mL.14

The first and most commonly used echocardiography method of LVM estimation is the linear method, which uses end-diastolic linear measurements of the interventricular septum (IVSd), LV inferolateral wall thickness, and LV internal diameter derived from 2D-guided M-mode or direct 2D echocardiography. This method utilizes the Devereux and Reichek "cube" formula, which assumes a prolate ellipsoid shape of the LV with a ratio of 1:2 minor- to major-axis (Figure 1).22 The cube formula includes a 20% correction based on overestimation of LVM in prior validation studies.14

It is essential to acquire LV images at end-diastole with the ultrasound beam directed perpendicular to the LV long axis approximately at the level of the mitral valve leaflet tips from either a parasternal long-axis or short-axis view.12 Additionally, the values for LV thickness obtained by direct 2D might be smaller than those obtained by M-mode; therefore, normal values for LVM might be not interchangeable.14 The current ASE and European Association of Cardiovascular Imaging Chamber Quantification Guidelines recommend the use of the LV tissue-blood interface for LVM measurement and propose normal values derived from this approach (Figure 1).12,14,23 Because of its simplicity, easy acquisition, and lower measured variability, the ASE and the European Association of Cardiovascular Imaging recommended that the linear method (2D-guided M-mode or direct 2D) be implemented as the best screening technique for LVH. Additionally, most of the data about the prognostic value of LVM are based on this method. However, any error in linear measurements can result in significant inaccuracies because all measurements are cubed in the LVM formula. This formula is also not accurate in asymmetric LVH, dilated cardiomyopathy, and other conditions with regional differences in LV wall thickness.14 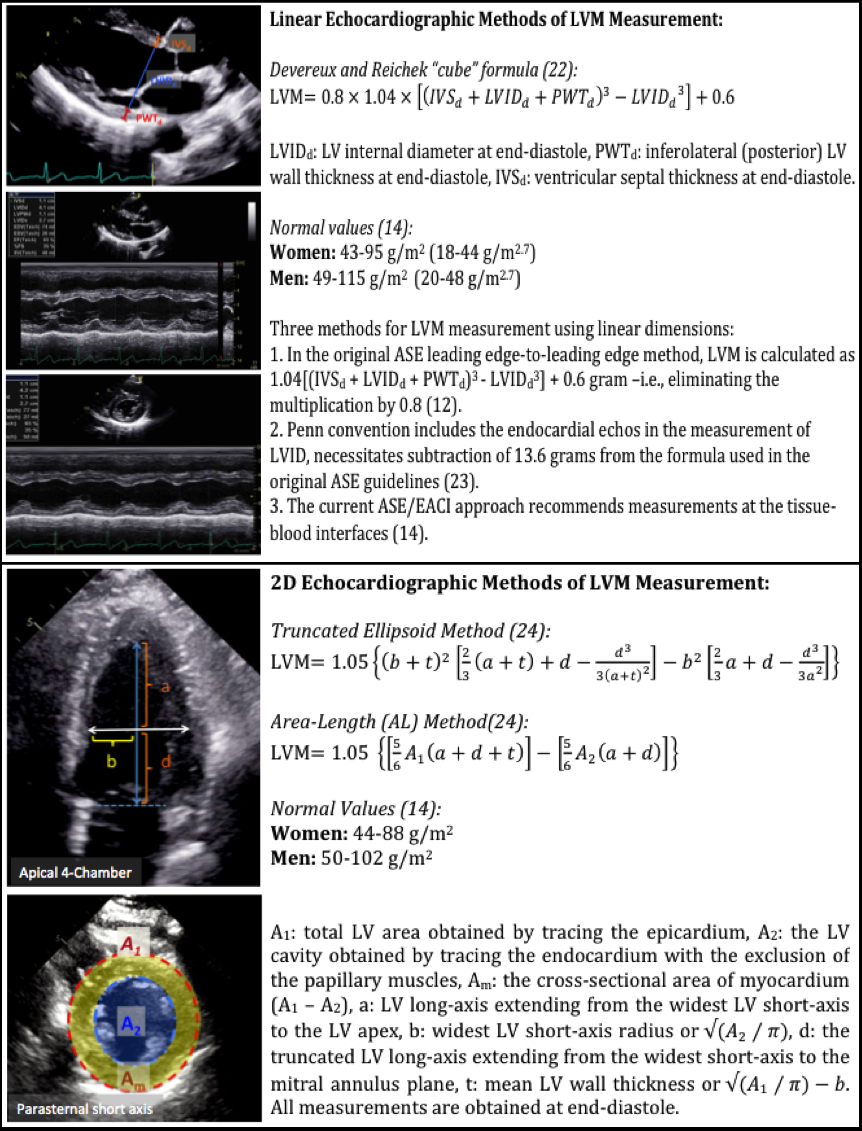 The most commonly used 2D echocardiography methods for LVM estimation are the area-length and truncated ellipsoid methods.14 In both, the area is measured at the midpapillary level in the parasternal short-axis view and at end-diastole (Figure 1).24 Postmortem data have demonstrated that both 2D echocardiography methods (area-length and truncated ellipsoid) and 2D-guided M-mode measurements of LVM were comparable, with modest correlations with autopsy-derived LVM (r = 0.66-0.72 for 2D echocardiography and r = 0.78 for 2D-guided M-mode).25 They also demonstrated that both area-length- and truncated ellipsoid-derived LVM were comparable in their correlation with autopsy LVM, and the inclusion of papillary muscles in the area measurements tended to overestimate LVM.25

A limitation of the 2D methods is that they rely on geometrical assumptions that are not applicable when there are major LV distortions or when the LV is foreshortened.12 Moreover, in comparison to the M-mode, the 2D methods require better echocardiography windows to identify endocardial and epicardial borders.24 Normal reference values for LVM indices using 2D echocardiography are listed in Figure 1.14

The last echocardiography method for measuring LVM is the utilization of real-time 3-D imaging. Real-time 3D echocardiography relies on direct measurement of the LV without geometric assumptions; therefore, it can theoretically provide a more accurate estimation of LVM than linear M-mode or 2D methods. Additionally, real-time 3D estimation of LVM has shown better agreement with CMR measurements than 2D direct and M-mode echocardiography measurements.26-27 Real-time 3D assessment of LVM demonstrated excellent correlation with CMR data with a Pearson's correlation coefficient (r) of 0.99, in comparison to the 2D method versus CMR, which had an r of 0.84.26 Similarly, the interobserver and intraobserver variability of real-time 3D measurements were 7% and 8%, respectively, which were significantly better than the interobserver and intraobserver variability of the 2D method (37% and 19%, respectively).27 In addition, LVM values by real-time 3D reportedly were similar to CMR values with only a minimal bias of 4 grams.27 Therefore, the real-time 3D technique improves the accuracy and reproducibility of echocardiography estimation of LVM but is highly dependent on the equipment used and the quality of the images obtained.14 ASE and European Association of Cardiovascular Imaging Chamber Quantification Guidelines did not provide normal reference values for real-time-3D-derived LVM because of limited published data.14

Traditionally, LV has been classified into four mutually exclusive patterns according to LV geometry assessed by RWT and the presence or absence of LVH defined by an LVM index >115 g/m2 for men or >95 g/m2 for women (Figure 2).1 This traditional classification, which has been adopted by the ASE and the European Association of Cardiovascular Imaging, has disadvantages related to the use of linear measurements to reflect a 3D LV structure. In addition, the traditional approach does not identify isolated changes in LV size or LV thickness because RWT is a ratio. 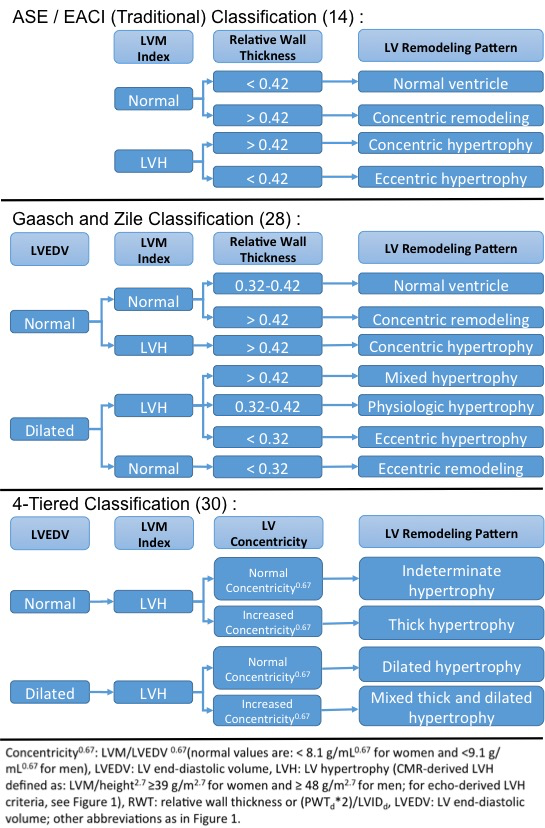 In an attempt to develop a classification that is more inclusive of different physiologic and pathologic remodeling phenotypes, Gaasch and Zile suggested including LV end-diastolic volume as an additional marker to identify LV dilatation (Figure 2).28 This classification provided incremental prognostic value regarding CVD outcomes in the Cardiovascular Health Study cohort.29

In another attempt to address the limitations associated with the traditional remodeling classification, Khouri et al. suggested a four-tiered classification of LVH (Figure 2).30 The four-tiered classification was evaluated in the Dallas Heart Study over a mean follow-up of 9 years and successfully stratified LVH into subgroups with differential prognosis. Dilated LVH and mixed thick and dilated LVH carried the worst prognosis for heart failure or CV death, and indeterminate hypertrophy had comparable rates to those without LVH.31