Routine Use of Transesophageal Echocardiography in TAVR: PRO

Editor's Note: This is Part I (PRO) of a two-part Expert Analysis. Go to Part II (CON).

Transcatheter aortic valve replacement (TAVR) has become an accepted treatment for inoperable and high-risk patients with symptomatic severe aortic stenosis.1-4 The rigorously performed randomized controlled trials (RCTs) nearly uniformly mandated or highly recommended transesophageal echocardiography (TEE) for intraprocedural guidance and, in this setting, have shown progressively lower rates of mortality, stroke, and complications. In fact, pooled 30-day mortality from RCTs are significantly lower than the pooled mortality from multicenter registries.5 Why then, is there a question about the routine use of TEE for TAVR?

To some extent, the question is mired in misconceptions and a failure to recognize the data supporting the use of TEE. One of the primary misconceptions is that the use of TEE requires general anesthesia. A number of sites in the United States and Europe routinely use TEE during either conscious sedation or monitored anesthetic care.6 TEE has been routinely performed using conscious sedation with recommendations outlined in recent guidelines and does not require general anesthesia.7

Another misconception is that the general anesthesia/TEE algorithm increases length of stay and requires extra personnel, which results in higher cost to the hospital. The short-sightedness of this argument seems obvious: if TEE can help avoid complications8-10 such as paravalvular regurgitation (PVR), annular/aortic rupture, new pacemaker requirement, or acute kidney injury by reducing contrast use, then, in fact, there would be a significant savings to the hospital with likely improved outcomes for patients. Studies suggesting an increase in length of stay with general anesthesia required an intensive care unit stay for extubation.11 In the recent report of the PARTNER II SAPIEN 3 registry in which 85% of patients underwent TAVR with general anesthesia and TEE guidance, the median length of hospital stay was 3 days (interquartile range [IQR] 2-6 days) for high-risk or inoperable patients and 3 days (IQR 2-4 days) for intermediate-risk patients. Our institution, similar to many other institutions in that trial, routinely extubates the patient before leaving the procedure room, and patients do not require an intensive care unit stay. A recent meta-analysis of 13 nonrandomized studies/registries reporting data from 6,718 patients undergoing TAVR (3,227 performed under conscious sedation) showed that up to 17% of conscious sedation patients require conversion to general anesthesia during the procedure. Urgent intubation with conversion to general anesthesia, however, was frequently associated with hemodynamic instability, which likely contributed to greater morbidity. Dall'Ara et al. compared 1,712 TAVR patients using general anesthesia with 1,095 patients using conscious sedation in the European Society of Cardiologist's Transcatheter Valve Treatment Registry and found that the general anesthesia patients had a higher immediate procedural success rate and a lower rate of periprocedural complications, such as requirement for permanent pacemaker implantation and cardiac tamponade.12 This study also showed a strong trend to higher myocardial infarction, major stroke, and in-hospital death rate in the conscious sedation group (7.0% conscious sedation vs. 5.3% general anesthesia, p = 0.053).

If conscious sedation is used without TEE, then imaging is frequently performed using transthoracic echocardiography (TTE) without reduction in required personnel. In addition to the need for significant experience and expertise of the imager, there are significant disadvantages to TTE as an intraprocedural tool (Table 1).13 Not only is TTE suboptimal for annular sizing, assessing risk for coronary obstruction, and positioning, but it may also have limited utility for the accurate assessment of PVR due to acoustic interference by prosthetic material. Importantly, TTE will not infrequently cause delays in the interventional procedure and increases the risk of significant radiation exposure for the imager.

Table 1: Strengths and Weaknesses of TTE vs. TEE

Studies directly evaluating the utility of TEE have in fact been performed. Bagur et al. evaluated 100 patients undergoing transapical TAVR: 25 using fluoroscopy alone and 75 using TEE.14 The authors found that there was no significant difference in 1-year mortality between the two groups despite the TEE group having significantly greater prevalence of moderate to severe mitral regurgitation. However, this study did find that the use of TEE as the primary imaging technique to guide TAVR was associated with a dramatic reduction in contrast media use. This could have significant implications for outcomes because a number of studies have shown that acute kidney injury is associated with short-term morbidity (i.e., dialysis) and long-term mortality.15-17 In fact, reports of TEE-only-guided TAVR have allowed patients to avoid hemodialysis.18

The strongest argument in favor of TEE for TAVR comes from the Brazilian Registry.20 In this study, the Edwards SAPIEN XT and Medtronic CoreValve prosthesis were used in 360 (86.1%) and 58 (13.9%) cases, respectively. The Society of Thoracic Surgeons score (%) was 14.2 ± 11.5, and the majority of implantations were performed in a regular catheterization laboratory (83.5%) using general anesthesia (84%) and monitored by TEE (70.6%). All-cause mortality at 30 days and 1 year were 9.1% and 21.5%, respectively, which are comparable to other studies. The use of TEE to monitor the procedure was found to be a protective factor against overall (hazard ratio: 0.57) and late (hazard ratio: 0.47) mortality (Figure 1). 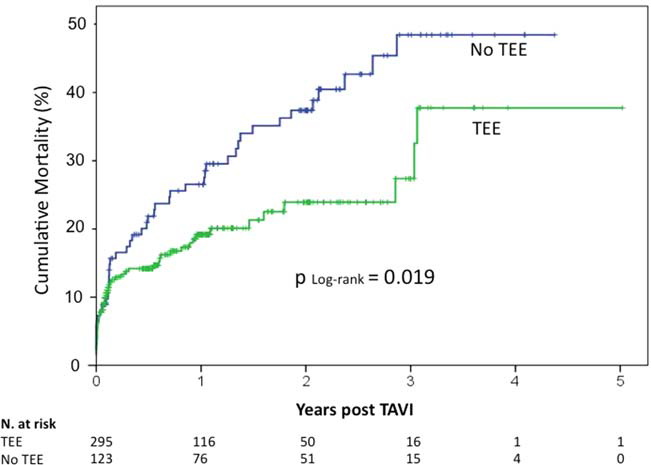 Greason et al. recently attempted to define the preprocedural characteristics that might predict intraoperative morbidity.21 In this retrospective study, 215 patients' records were evaluated, and significant intraprocedural morbidity requiring immediate surgical intervention (major vascular surgery and emergency cardiopulmonary bypass) occurred in 10.2% of cases. These events have similar incidence for balloon-expandable and self-expanding valves and were irrespective of sheath size. There were no baseline patient characteristics that could predict intraoperative morbidity, leading the authors and the accompanying editorial22 to suggest that the identification of patients who can safely undergo a "minimalist approach" is complex and, to date, poorly understood. In fact, Doenst and Schulze argue that "(b)ecause patient safety is our primary goal and the potential to intervene surgically immediately has to be guaranteed to everyone, there is no doubt that a hybrid operating room with a combined team of trained interventional and structural cardiologists and cardiac surgeons supported by cardiac anesthesiologists is the only answer."

The last argument I can offer is more common sense than data driven. A recent report (ACC 2015) of the SAPIEN 3 intermediate risk (average Society of Thoracic Surgeons score = 5.3) registry (n = 1059) reported a 30 day all-cause mortality rate of 1.1% and a cardiovascular mortality rate of 0.9%. As noted, 85% of patients had their procedures under general anesthesia with TEE. Greif et al.23 reported their outcomes in 461 intermediate risk (mean logistic EuroSCORE = 16.27) patients with TAVR guided by only fluoroscopy under local anesthesia; the 30 day all-cause mortality rate was 5.0% with a cardiovascular mortality rate of 2.6%. Given the obvious trend in the TAVR field supporting the use of transcatheter therapies in lower risk cohorts, patients and physicians have the expectation of low mortality and low complication rates. As the risk profile of these patients decreases, so does the risk of general anesthesia and TEE. And if TEE can help prevent 1 death out of 100 TAVRs, we will have avoided doubling the mortality rate of this procedure in a lower risk population.

Thus, the data support the use of TEE to prevent complications and improve survival. Physicians performing TAVR need to continue to advocate for their patients and resist succumbing to the short-term economic pressures that in the long run may increase healthcare costs and result in poor outcomes.

YOU ARE HERE: Home > Latest in Cardiology > Routine Use of Transesophageal Echocardiography in TAVR: PRO