For more than six decades, the ACC has been dedicated to the service of cardiovascular professionals and to assisting them in meeting the ongoing challenges they face in their practice of medicine. A recent CardioSurve survey of more than 185 FACCs sought to understand not only what are the top issues facing cardiologists over the next few years, but also the ones that the ACC could most impact in a positive way.

Not surprisingly, two of the biggest challenges for today’s cardiologists remain payment and reimbursement issues (62%) and Maintenance of Certification (MOC) and other certification/training issues (49%). In terms of ACC involvement with these top challenges, almost three out of four cardiologists (74%) indicate that they would like to see the ACC help them deal with MOC, certification, and training issues and a nearly equal percentage (71%) feel that the College is very likely to make a positive difference on this issue. On the challenge of payment and reimbursement, most cardiologists (60%) would like for the ACC to have an impact in this area. However, in today’s political and financial climate, cardiologists are a bit more somber in their perspective of the likelihood of the College to make a positive difference on this issue. Only three out of 10 cardiologists (30%) believe that the ACC is very likely to have a positive impact.

Other challenges cardiologists cite are utilization of Appropriate Use Criteria (AUC) (24%) and helping cardiovascular professionals stay up to date from a clinical standpoint (23%). More than half of cardiologists are interested in the ACC having an impact on AUC (56%) and keeping them up to date clinically (53%). Furthermore, most clinicians are convinced that the ACC is very likely to make a positive difference in both of these areas – keeping up to date (90%) and AUC (79%). 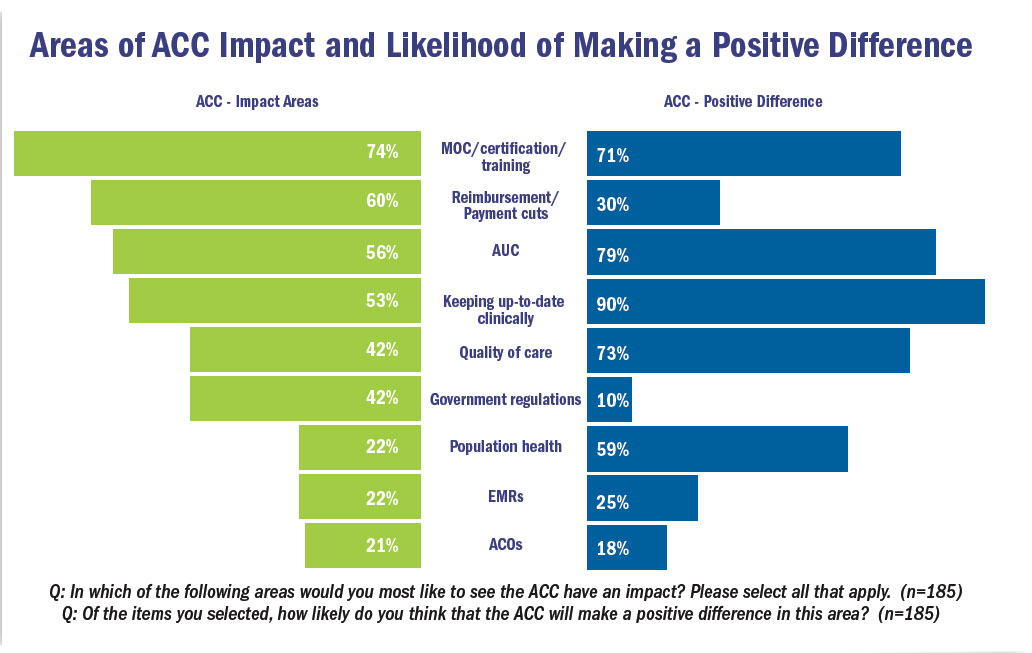 While not quite top-of-mind, growing issues of importance like quality of care and population health have been identified by cardiologists as areas where the College can play a major role. Nearly three out of four clinicians (73%) believe that the ACC is very likely to make a positive difference in quality of care and almost three out of five (59%) feel the same way regarding ACC’s impact on population health. To that end, the College leadership is currently developing a comprehensive population health strategy that will be unveiled this year, while its quality improvement offerings for both practices and hospitals continue to grow. Just this year, the Society of Cardiovascular Patient Care joined the ACC as the accreditation arm of the College.

As the ACC continues to move forward with implementation of its Strategic Plan, these issues that are front-and-center for members are also front-and-center for the College. Development of programs, products and resources to help members meet these challenges is ongoing. Additionally, ACC members and staff are working on the front lines to ensure members of Congress, payers and other stakeholders understand the importance of these issues to clinicians. The goal: to have the greatest impact possible.

YOU ARE HERE: Home > Latest in Cardiology > Highlighting Areas of ACC Impact for Cardiologists