How Long Should We Continue Beta-Blockers After MI?

As such, for those patients without impending cardiogenic shock who can afford to acutely blunt this physiologic response, beta-blockers confer the immediate benefit of reducing infarct size, increasing threshold for ventricular arrhythmias, and, over the long term, preventing maladaptive ventricular remodeling and HF.1,2 Beta-blockers are thus considered a cornerstone of therapy in patients with MI. However, other effective therapies to blunt sympathetic activation, most notably reperfusion, are now available.3 Most of the benefit of beta-blocker therapy comes from trials that predate modern reperfusion and modern medical therapy. With contemporary revascularization strategies on a background of antiplatelet agents, angiotensin-converting enzyme inhibitors (ACEI), and statins, the additional benefit conferred by beta-blockers post-MI is therefore less well-known.

ISIS-1 (First International Study of Infarct Survival) randomized 16,027 patients presenting with MI to intravenous followed by oral atenolol or control and demonstrated a reduction in vascular death at 7 days with immediate beta-blocker use.4 This 15% relative risk reduction had a wide confidence interval (CI) (95% CI, 1-25%), and benefit was primarily seen early on, with a nonsignificant reduction in vascular death after 7 days. Notably, infarct size, cardiac arrest, and reinfarction were unchanged, and early beta-blocker use came at the price of increased inotropic drug use. In a systematic review of 31 long-term trials including 24,974 patients randomized to beta-blockers or control after MI, a significant reduction in all-cause mortality favoring beta-blocker use was seen (odds ratio 0.77; 95% CI, 0.70-0.84).5 Duration of follow-up was overall limited, with a mean of only 1.4 years even in long-term trials. Importantly, the median publication date of the 82 short- and long-term randomized trials included was 1982, in the era before reperfusion or contemporary medical therapy for MI was routine. No patients in ISIS-1 received reperfusion therapy, and only 5% were discharged on an antiplatelet agent, raising the question of its relevance in the reperfusion era.

In the modern era, we have a number of therapies targeting the sympathetic system in acute coronary syndrome (ACS). Reperfusion therapy itself is extremely effective in reducing sympathetic activity acutely and continuously over 24 hours following angioplasty, a benefit seen less often with late reperfusion.3 Similarly, antiplatelet agents and statins limit infarct size independent of beta-blockade.6,7 ACEI and cardiac rehabilitation post-MI have favorable autonomic effects as well. In the COMMIT (Clopidogrel and Metoprolol in Myocardial Infarction) trial, all 45,852 patients received aspirin, 50% dual antiplatelet therapy, 67% ACEI and 54% fibrinolytic therapy, while no patients underwent primary percutaneous coronary intervention.8 The COMMIT trial found no difference in 30-day mortality or 30-day combined death, reinfarction or cardiac arrest in patients presenting with acute MI treated with intravenous followed by high-dose oral metoprolol versus placebo. From the time of ISIS-1 publication in 1986 to the COMMIT trial in 2005, standard of care for acute MI has evolved and in the context of modern therapy the incremental benefit of beta-blockers likely attenuated.

Other studies have questioned the duration of benefit of beta-blocker therapy long after MI. From a longitudinal, observational study of patients in the REACH (Reduction of Atherothrombosis for Continued Health) registry, a propensity score-matched analysis of the association of beta-blocker use with cardiovascular outcomes was performed in 6,758 stable patients with history of MI.9 At median follow-up of 43 months, patients on beta-blockers had similar rates of the primary outcome (composite of cardiovascular death, nonfatal MI, or nonfatal stroke) or secondary outcome (primary outcome plus hospitalization for atherothrombotic events or a revascularization procedure) when compared with patients not on a beta-blocker. In patients with recent MI within 1 year, beta-blocker use was associated with lower rates of the secondary outcome (odds ratio 0.77; 95% CI, 0.64-0.92), suggesting short-term benefit of beta-blockers post-MI driven by a reduction in hospitalizations or revascularization procedures. In a post-hoc analysis from the CHARISMA (Clopidogrel for High Atherothrombotic Risk and Ischemic Stabilization, Management, and Avoidance) trial, beta-blockers were associated with lower rates of the primary composite outcome of nonfatal MI, stroke, and cardiovascular mortality (hazard ratio 0.69; 95% CI, 0.50-0.94) at 28 months in a propensity-score-matched cohort of 1,962 patients with prior MI without HF.10 There was no significant difference in mortality (p = 0.20), however, and results were driven primarily by lower rates of recurrent MI (3.4 vs. 4.9%; p = 0.049). These studies support the association of beta-blocker use with lower rates of reinfarction in the short- to intermediate-term without reduction in cardiovascular mortality in the modern era.

Beta-blockers are notoriously poorly tolerated and can significantly affect quality of life. A post-hoc analysis of INVEST (International Verapamil SR Trandolapril Study) evaluated 7,218 hypertensive patients with prior MI who were randomized to either verapamil sustained release or atenolol-based strategies and found no difference in outcomes of death or total MI (Figure 1).11 Patients treated with verapamil had a greater subjective feeling of well-being and trended toward less angina and fewer strokes (hazard ratio 0.71; 95% CI, 0.49-1.01). This signal toward increased stroke with beta-blockers may be due to ineffective reduction of central aortic pressures. Additional adverse metabolic side effects including new onset diabetes, weight gain, and hypercholesterolemia often lead to drug discontinuation as well.

Figure 1: Verapamil Sustained Release Versus Atenolol in Patients With Prior MI in INVEST11

The current 2014 AHA/ACC Guideline for the Management of Patients With Non–ST-Elevation Acute Coronary Syndromes suggests that it is reasonable to continue beta-blocker therapy in patients with normal left ventricular (LV) function with ACS without ST-segment elevation (Class IIa, Level of Evidence C) (Table 2).13 The 2013 ACCF/AHA Guideline for the Management of ST-Elevation Myocardial Infarction lends a Class I, Level of Evidence B recommendation that beta-blockers should be continued during and after hospitalization for all patients with ST-segment elevation MI and no contraindications.14 However, these guidelines also comment that long-term duration of routine beta-blocker therapy in patients without HF or hypertension has not been prospectively addressed and refer to the AHA/ACCF Secondary Prevention and Risk Reduction Therapy for Patients With Coronary and Other Atherosclerotic Vascular Disease: 2011 Update, recommending 3 years of beta-blocker therapy in this subset (Class I, Level of Evidence B).15 Continuation of beta-blockers beyond 3 years in these patients is considered reasonable (Class IIa, Level of Evidence B). These guidelines are largely based on evidence pre-dating contemporary medical and reperfusion strategies. The 2015 ESC Guidelines for the management of acute coronary syndromes in patients presenting without persistent ST-segment elevation recommend only long-term management with beta-blockers post-MI in those patients with LV ejection fraction (LVEF) ≤ 40%, stating that contemporary randomized trials of beta-blocker therapy have not been conducted in patients after ACS without ST-segment elevation with normal LV function.16

Table 2: Summary of Current Recommendations for Beta-Blockers After MI

This evolution of the impact of beta-blockers post-MI follows trends in reperfusion and advances in medical therapy. In patients receiving prompt revascularization or thrombolytics in addition to antiplatelet agents, ACEI, and aggressive lipid-lowering therapy, the mortality benefit of beta-blockers post-MI seen in the pre-reperfusion era is likely attenuated. The substrate itself of a reperfused, viable myocardium is sure to behave differently and confer different clinical outcomes. By avoiding myocardial necrosis and scar formation with contemporary management strategies in ACS, the benefit of beta-blockers in preventing sudden cardiac death via scar-based reentrant arrhythmias is attenuated.

Which patients, then, should receive beta-blockers during an index hospitalization for ACS? Patients at low risk for cardiogenic shock should be started on a beta-blocker in-hospital to reduce the risk of reinfarction and angina; this is applicable for most patients with an MI. Extrapolating from pre-reperfusion-era trials, patients presenting late with large infarct size and perhaps without revascularization may have the greatest benefit from continuation of oral beta-blockers, including potential reduction in mortality and sudden death. These are also patients who will have reduced LVEF, where beta-blockers remain the standard of care.

How long should we continue beta-blockers post-MI? Given the lack of robust data on the duration of therapy for continued efficacy of beta-blockers post-MI, perhaps a more personalized approach should be used based on the LVEF post-MI (Figure 2). If the LVEF is low (<40%), beta-blockers should be used long term. For most other patients with preserved ejection fraction, the evidence suggests short-term use to reduce the risk of reinfarction and angina. Further studies are needed to understand the optimal duration of beta-blocker therapy post-MI.

Figure 2: Evidence-Based Use of Beta-Blockers in 2017 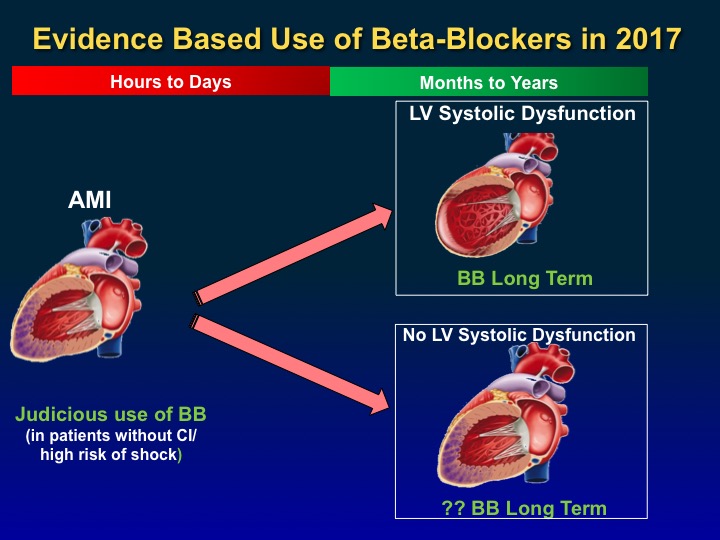 YOU ARE HERE: Home > Latest in Cardiology > How Long Should We Continue Beta-Blockers After MI?