The Heart of the Female Athlete

Female sports participation has increased enormously since passage of Title IX in 1972, and women now participate in almost equal numbers as men from the high school level through the Olympics.1-3 Over these same decades, sports cardiology has emerged as a clinical field to serve the needs of highly active individuals and athletes. Though historically female athletes have been underrepresented in the body of research that informs sports cardiology practice, more recently several studies have embraced gender as an important biologic variable. We will review the impact of gender on key issues within sports cardiology and identify areas relevant to the female athlete in need of further investigation.

Female and male athletes have different prevalence of both normal, training-related ECG findings and of abnormal, potentially pathologic ECG patterns (Table 1). Specifically, normal variants including elevated QRS voltage, incomplete right bundle branch block and normal early repolarization are less common in female athletes than males.4-8 Whereas inferior and lateral T-wave inversions (TWI) are more prevalent in male athletes, anterior TWI are more prevalent in females and are less commonly associated with structural cardiac disease than TWI in other distributions.9,9-11 Independent of athletic remodeling, females have longer corrected QT (QTc) intervals than males. This is reflected in the consensus guidelines for athlete ECG interpretation, which stipulate a higher cutoff for normal QTc for females than males.12,13 Male and female athletes are not otherwise treated differently in these ECG interpretation guidelines despite differing in their ECG manifestation of athletic remodeling and in their pre-test probability of certain cardiac diseases (see below). We await data on whether these new guidelines perform differently in males and females when the ECG is used in the pre-participation exam. 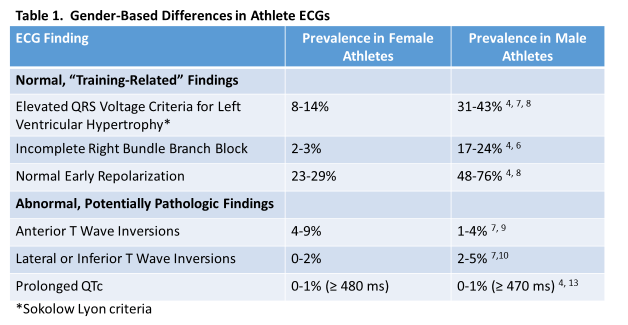 Exercise-induced cardiac remodeling as manifest on cardiac imaging also differs based on gender. Female athletes have smaller absolute biventricular chamber size, left ventricular (LV) mass and wall thickness than male athletes.14,15 Consistent with prior work, a recent study that evaluated elite white athletes found that no females had LV wall thickness >12 mm (vs. 2.5% of males) and comparatively few females (7%) had LV end-diastolic dimension >54mm (vs. 47% of males).7 Though such absolute cutoffs for normality may be appealing, their application is fraught with several issues. First, the most accurate way to adjust measured heart size for body size remains unclear. For example, though LV and right ventricular (RV) size when normalized to body surface area (BSA) are actually larger in female than male athletes,7,16 this difference is attenuated or even reverses when normalized to lean body mass using allometric scaling.17 Second, the degree of expected exercise-induced cardiac remodeling within genders also varies based on sport type and ethnicity. For example, whether an LV wall thickness of 12 mm falls into a true clinical gray zone depends on whether the athlete is a white female long-distance runner with small body habitus or a black female thrower with larger body habitus – because black ethnicity and high-static component "strength" sports are both associated with greater LV wall thickness.18,15 Overall, clinical interpretation of cardiac imaging in athletes necessitates an individualized approach that integrates gender along with body size, ethnicity and sport type. Whether reported differences in the degree and geometry of cardiac remodeling in males and female athletes reflect fundamentally different biological adaptation to exercise is unclear – future work evaluating the underlying mechanisms of exercise-induced cardiac remodeling must identify whether gender serves as a modifier.

When female athletes have cardiac findings on clinical evaluation that do not appear entirely consistent with physiologic remodeling, the most crucial diseases to exclude are those associated with sudden cardiac death (SCD). Women have slightly lower phenotypic prevalence of hypertrophic cardiomyopathy and arrhythmogenic right ventricular cardiomyopathy, which are diseases that may overlap structurally with exercise-induced remodeling and are among the most common causes of SCD in young athletes. Interestingly, even accounting for this differing prevalence of disease, the rate of SCD is consistently and disproportionally lower in female than male athletes (Table 2).19-26 This discordance suggests that those female athletes with structural cardiac disease may be less likely to suffer SCD than male athletes with the same conditions. Whether this apparent protection is attributable to differences in phenotypic expression of genetically mediated cardiac disease, to modification of arrhythmic risk by hormonal milieu or to other factors remains to be determined.27

Conversely, female athletes are more likely than males to harbor specific occult medical issues that either may present with symptoms that falsely suggest cardiovascular origin or may have associated cardiovascular manifestations (e.g., iron deficiency anemia, pregnancy, autoimmune disease, thyroid disease, fibromuscular dysplasia). The optimal comprehensive care for the female athlete presenting for evaluation includes a heightened awareness and appropriate testing for these conditions.

The Impact of Long-Term Exercise in the Female Athlete

Recently the question of whether long term exposure to high doses of exercise may be harmful has garnered a large amount of interest. This has been driven by the observation in several large epidemiologic studies that the most voluminous exercisers have slightly higher, though statistically insignificant, risk of mortality than those who exercise moderately (the so-called "reverse J-shaped curve").28-33 When mortality risk was stratified by gender in the largest of these studies, the shape of the exercise dose response curve in men and women was slightly different: whereas it retained the reverse-J shape in men, the plot was more curvilinear in women--meaning the most active women had similar mortality as those performing less activity (Figure 1).28 It is important to emphasize that, statistically, the data in men and women alike suggest that high doses of exercise appear similarly beneficial as moderate doses.28 However, the question of whether there may be a gender-based difference in risk at the extreme end of exercise dose is interesting because female athletes may also be at lower risk of developing forms of cardiac disease that have been posited as links between high amounts of exercise and excess cardiovascular disease risk. 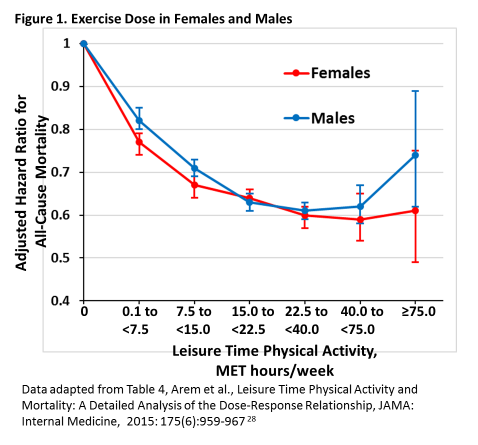 Specifically, a subset of masters endurance athletes, all male, have been found to have ventricular fibrosis as demonstrated by late gadolinium enhancement (LGE) on cardiac magnetic resonance imaging.34-37 The cause of this fibrosis is unclear but may be ventricular overload, coronary disease or prior myocarditis. More recently, in a cohort that included an equal number of male and female masters triathletes, a sizable percentage of the men (17%) but none of the women were found to have LGE.38 These women competed in shorter distance events and were less fit than the men. Future work is needed to identify whether these results were due to different competitive levels between the groups or other gender-based biological mechanisms.

A similar narrative exists for the risk of coronary artery calcification and plaque in masters athletes. The initial studies examining this concept in males found a higher prevalence of CAD in athletes than controls despite adjustment for traditional risk factors.36,39 Though such cross-sectional work does not prove that exercise is causative, exercise-mediated mechanisms for plaque deposition have been proposed including turbulent coronary flow and altered calcium homeostasis. Recently, Merghani et al. compared the prevalence of CAD in masters endurance athletes, including 30% women, versus sedentary controls. Whereas male athletes had more CAD than controls, female athletes had a similar burden as sedentary females. The women in this study were, on average, close to menopause. It is possible that the absence of increased CAD in female athletes may be because CAD in women typically occurs later, after the menopausal fall in estrogen levels.40 How estrogen status may protect women from any interaction between high exposure to exercise and plaque formation remains unclear.

Finally, numerous observational studies have demonstrated that high doses of exercise are associated with more atrial fibrillation (AF).41 There are conflicting data on whether the added risk of high dose exercise applies equally to men and women. A recent prospective study suggested that AF risk in women followed the same pattern as in men, specifically that risk in the most active women was higher than those who were moderately active and similar to those who were inactive.42 However, a larger meta-analysis that included almost 150,000 women found that AF risk continued to decline across the spectrum of exercise dose.43 Overall, future studies that target masters female endurance athletes including those at an older age are needed in order to identify if highly active women are partially immune to the processes that drive ventricular fibrosis, CAD and AF or perhaps only temporarily protected by hormonal status until after menopause. Fortunately, the number of such women available for this research is posed to increase as more young women begin sports and then continue exercise habits into later life.

YOU ARE HERE: Home > Latest in Cardiology > The Heart of the Female Athlete