Machine learning is more predictive and discriminative than standard regression methods at identifying PCI patients at risk for 180-day cardiovascular mortality and 30-day congestive heart failure (CHF) rehospitalization, but not in-hospital mortality, according to a study published in JACC: Cardiovascular Interventions. Machine learning may also be effective at identifying subgroups at high risk for post-procedure mortality and readmission.

Chad J. Zack, MD, MS, et al., studied 11,709 patients who underwent 14,349 PCIs between January 2004 and December 2013. Demographic and clinical parameters known at the time of admission were used to predict in-hospital mortality and additional variables available at discharge were examined to identify patients at risk for CHF readmission.

For each event, the researchers trained a random forest regression model to estimate the time-to-event. They then used the predicted time-to-event as a score, generated a receiver operating characteristic curve, and calculated the area under the curve (AUC). Model performance was then compared with a logistic regression model using pairwise comparisons of AUCs and calculation of net reclassification indices.

The predictive algorithm identified a high-risk cohort representing 2 percent of all patients who had an in-hospital mortality of 45.5 percent compared with a risk of 2.1 percent for the general population. Advancing age, CHF and shock on presentation were the most predictive.

Of the patients who survived to discharge, 339 (3 percent) died from any cause within 180 days of leaving the hospital. The machine learning model identified a small subgroup of patients (1 percent) at substantially higher risk for cardiovascular death (13 percent) at 180 days. The model had good discriminatory ability for 180-day cardiovascular mortality that was significantly better than the discriminatory ability of the reference logistic regression, leading to a net reclassification improvement of 0.02 percent.

The risk of 30-day CHF readmission for patients surviving until discharge was 0.7 percent. A high-risk group comprised of 1 percent of all patients was identified with a risk of 30-day CHF rehospitalization of 8.1 percent using machine learning. The readmission model had excellent discriminatory ability and significantly outperformed the reference logistic regression model.

"Our models incorporated all available variables, many of which are unlikely to be included in traditional logistic regression models," the authors write. "In addition, the models were able to identify patient subgroups who were at increased risk for procedure-related complications. Preemptively identified high-risk patients can be potentially treated with interventions to reduce mortality and rehospitalization both in-hospital and after hospital discharge."

They conclude that the study supports "the potential role for the integration of machine learning into clinical practice for the identification of high-risk populations following PCI."

Adnan K. Chhatriwalla, MD, FACC, et al., used the STS/ACC TVT Registry to examine the association between institutional experience and outcomes in 12,334 patients who underwent TMVr with MitraClip at 275 sites.

Procedural time and complications decreased based on institutional case experience. In addition, "acceptable" procedural success – defined as ≤2+ residual MR without mortality or need for cardiac surgery – increased based on institutional experience, with rates of 91.2 percent, 91.2 percent and 92.9 percent for the lowest-performing, middle- and highest-performing tertiles, respectively.

The researchers noted improvements in procedural success, procedure time and procedural complications after an institution performed about 50 cases, with continued improvement up to 200 cases.

Additional research is needed to "guide subspecialty and societal decision-making regarding the optimal number of mitral centers of excellence and operators, and the minimal number of procedures required to achieve and maintain an acceptable level of competence, let alone excellence."

Lower Education Level Associated With CVD, Mostly Due to Smoking

Lower education level is associated with increased subclinical atherosclerosis, mostly due to a higher level of smoking in this population, according to a study published in the Journal of the American College of Cardiology.

PESA is a prospective cohort study of asymptomatic individuals working at Santander Bank Headquarters in Madrid, Spain. After factors associated with atherosclerosis were identified, a multiple mediation model was created to quantify the effect of SES on subclinical atherosclerosis as explained by lifestyle behaviors.

Among lifestyle factors demonstrating an association with education level, smoking status, cigarettes per day, years since stopping smoking (former smokers) and dietary pattern were also associated with the presence of generalized atherosclerosis. Diet became nonsignificant after adjusting for age and sex.

"SES in general, and education level in particular, are associated with a greater prevalence of diffuse atherosclerosis in young individuals at a low-to-moderate cardiovascular risk," the authors write. "This effect seems to be mostly mediated by the greater prevalence of smoking and the higher number of cigarettes smoked, whereas we could not find a significant effect of more unhealthy dietary patterns or other habits or risk factors," wrote the authors.

They conclude that smoking cessation programs are still needed, particularly in populations with lower education level.

The authors acknowledge that a limitation of this study is the relative homogeneity of the population, who all worked in the same office, influencing the range of education and economic levels as well as dietary patterns.

By identifying modifiable drivers of burnout, data may inform efforts to understand the causes and design solutions at an individual and organizational level, according to a review paper published in the Journal of the American College of Cardiology.

The survey was completed by 2,274 physicians, and respondents were categorized into two groups based on self-reporting: no burnout group and burnout group.

Results showed the majority of survey respondents (73.2 percent) did not report having burnout symptoms. Of this group, 23.7 percent reported enjoying their work and 49.5 percent reported being under stress with less energy.

On the other hand, 26.8 percent of respondents reported being burned out. Of this group, 19.2 percent experienced at least one symptom of burnout, 6.4 percent reported chronic burnout symptoms that led to frequently thinking of work frustrations, and 1.2 percent reported feeling completely burned out to the point of possibly needing outside intervention.

The authors believe this study is the first to report burnout data specific to cardiologists, as well as the first to explore aspects of their professional lives associated with burnout or its absence. They add that these data may inform efforts to enhance cardiologists' well-being, which in turn is thought to improve patient care and reduce cost.

"This study highlights the importance of wellness, not just personal resiliency, but also the need for reforms in the systemic issues that negatively impact the wellness and work-life integration," Mehta says. "Clinician wellness is a strategic priority for the College and currently we are working on addressing wellness at all levels within the College."

The association between lower socioeconomic status (SES) and major adverse cardiac events (MACE) may begin in the brain, according to a study published in the Journal of the American College of Cardiology.

Amygdalar metabolism, a measure of stress-associated neural activity, was measured in a subset of 289 individuals. Using zip codes, SES was captured by neighborhood factors such as median household income and crime.

Researchers found that individuals who experienced major cardiovascular events (MACE) had a higher prevalence of several atherosclerotic risk factors, a greater burden of coronary artery calcium and lower SES. Neighborhood median income was negatively associated with MACE after adjusting for SES and arterial inflammation. Higher crime rate was associated with higher stress-related neurobiological activity. While higher arterial inflammation was also observed, these numbers were not significant.

Stress-related neurobiological activity was largely predictive of MACE after adjusting for SES. It was also associated with both hematopoietic tissue activity and arterial inflammation.

"The current findings identify a potentially modifiable biological pathway driving the increased burden of cardiovascular disease that encumbers the socioeconomically disadvantaged," concluded the authors. "These pathways originate in the brain, which provides a bridge between external factors and extra-neural diseases. By illuminating a multi-organ system linking SES to cardiovascular disease, this study sets the stage for testing new interventions that may forestall future heart attacks and strokes and reduce SES-driven health disparities."

Elevated blood pressure and cholesterol levels in young adulthood may lead to an increased risk of heart disease later in life, regardless of later in life exposure to these risk factors, according to research published in the Journal of the American College of Cardiology.

A total of 36,030 participants were included in the analysis. Over a follow-up period of 17 years, there were 4,570 incident CHD events, 5,119 heart failure events and 2,862 stroke events. Average measurements of SBP, DBP, HDL-C and LDL-C from young adulthood were all strongly correlated with later in life averages.

According to the researchers, young adults are difficult to reach with traditional, clinic-based preventive programs. They recommend implementation of preventive programs targeting individual young adults that are web-based, patient-centered, mobile and account for the fact that this age group may discount the importance of their future heart disease risk.

In a related editorial comment, Samuel S. Gidding, MD, FACC, and Jennifer Robinson, MD, MPH, explain that this study should be a wake-up call for the medical community to recognize the preventive care gaps experienced by younger adults.

"The time has come to recognize that preventive interventions are occurring too late in life to have a substantial impact on the population burden of atherosclerotic cardiovascular disease (ASCVD) and heart failure," they said. "Interventions in those with established ASCVD, advanced subclinical atherosclerosis, impaired myocardial function, diabetes or renal insufficiency are disease treatment studies and not true prevention. By moving to trials in younger higher risk individuals who have less advanced disease more amenable to reversal and developing precision medicine strategies based on genetics, imaging and other risk factors, the next era of cardiovascular disease prevention can begin." 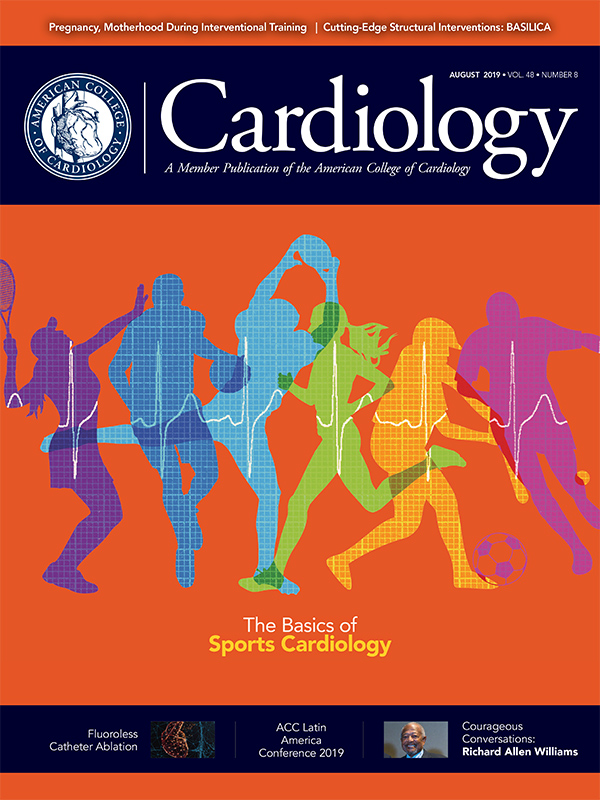