A 42-year-old male with no significant medical history initially presented to the emergency room with progressively worsening pleuritic chest pain radiating to his neck. Aside from associated dyspnea, he denied other heart failure symptoms.

Work up
His initial electrocardiogram (ECG) was remarkable for diffuse ST wave elevations, and he underwent urgent coronary angiography which revealed non-obstructive coronary disease. Echocardiography demonstrated a small pericardial effusion. He was subsequently diagnosed with acute pericarditis complicated by a small pericardial effusion on the basis of his symptoms, ECG findings and echocardiography. His initial C-reactive protein (CRP) was 15.1 mg/L. He was discharged on aspirin 650 mg three times daily (for 2 weeks), colchicine 0.6 mg twice daily, and beta blocker.

The patient continued to have recurrent chest pains (more than 4 months after his initial presentation) and presented to the pericardial disease clinic for further evaluation. His vital signs were normal with a blood pressure of 137/82 mmHg, heart rate of 96 beats per minute and oxygen saturation levels of 96 % on room air. His physical exam was remarkable for clear lungs, with an elevated jugular venous pulse (JVP) and evidence of a positive Kussmaul's sign with a distinct pericardial knock.

He underwent cardiac magnetic resonance imaging (MRI) which showed a loculated pericardial effusion overlying the RV free wall and findings consistent with effusive constrictive physiology (Figure 1). There was moderate to severe circumferentially increased pericardial signal intensity on delayed-enhancement imaging consistent with pericardial inflammation. He was commenced on triple-therapy with the addition of prednisone 50 mg along with colchicine 0.6mg twice daily and ibuprofen 200mg three times daily.

After being on triple therapy, his repeat MRI (6 months later), showed mild stable circumferential gadolinium enhancement and constrictive physiology. Patient symptoms of chest pain had improved, and inflammatory markers also trended down. Patient was gradually tapered off prednisone and ibuprofen over next 6 months.

After 1 year of his index presentation, patient reported no episode of chest pain, CRP and erythrocyte sedimentation rate (ESR) had normalized, but he continued to have dyspnea on exertion, leg swelling, abdominal distension despite being managed on diuretic. As patient continued to have symptoms of heart failure despite on medical therapy and repeat echocardiography again showed residual constrictive physiology, patient was referred for pericardiectomy.

In May 2019, the patient underwent radical pericardiectomy for constrictive physiology after eventual failure of medical treatment for over 1.5 years. Pathology confirmed fibrinous constrictive pericarditis. After surgery the patient reported losing 25 pounds, marked resolution of right-heart failure symptoms and significant improvement in exercise tolerance.

Which of the following is consistent with effusive constrictive pericarditis?

The correct answer is: B. Persistence of elevated right atrial pressure after removal of pericardial fluid is hallmark of effusive constrictive pericarditis.

Constrictive pericarditis (CP) involves scarring and loss of elasticity of the pericardium surrounding the heart, leading to impaired filling.

Effusive-constrictive pericarditis (ECP) is the most uncommon of the pericardial constraint syndrome1 involving both constriction of the visceral pericardium and an effusion causing a tamponade-like effect on the heart. In one of the largest prospective studies, Sagrista et al. reported prevalence of ECP at 1.3% in patients presenting with pericarditis and 6.9% of those with cardiac tamponade.2 It is a distinct entity with transitional and concomitant pathophysiologic features of acute effusive pericarditis with cardiac tamponade and chronic CP.

The clinical findings of ECP depend upon the stage of disease. Early-stage findings are consistent with a sizable pericardial effusion and cardiac tamponade. Later stages of effusive pericarditis may have features more suggestive of CP.

The initial hemodynamic disturbance in ECP resembles that of tamponade; with the removal of pericardial fluid and reduction in intrapericardial pressure, the hemodynamic abnormality persists in a form resembling constriction, and the right atrial pressure continues to remain elevated with a change in waveform reflecting the transition in mechanism from elastic to inelastic diastolic compression.2,3

Therefore, ECP is confirmed following pericardiocentesis by persistent echo-Doppler evidence of constrictive hemodynamics that are early diastolic filling, abnormal ventricular septal motion (septal bounce) due to interventricular dependence, respiratory variation of mitral inflow velocities, and diastolic flow reversals in the hepatic vein with respiration and normal or augmented medial early diastolic velocity (e′) that is higher than that of the lateral mitral e′ (annulus reversus).4 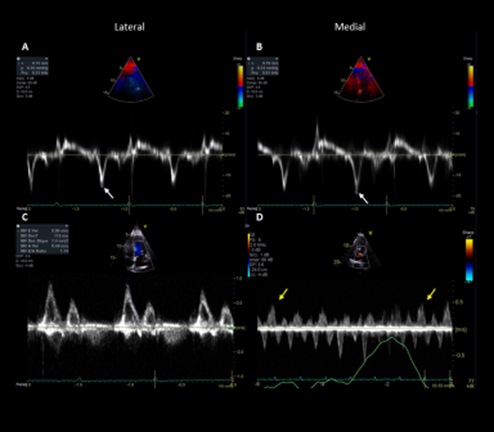 Cardiac magnetic resonance (CMR) imaging can evaluate the degree of pericardial thickening and inflammation. In addition, the ability of CMR to distinguish pericardial fluid from the pericardium and to detect inflammation makes it useful in diagnosis of ECP.1

On cardiac catheterization, rapid right ventricular filling waves (dip-and-plateau) supporting prominent early diastolic filling consistent with constrictive physiology is typically observed post pericardiocentesis. Although, cardiac catheterization is the gold standard for the diagnosis of ECP,5 echocardiography is widely used as the imaging of choice for the diagnosis of ECP.

Anti- inflammatory therapy is the first line of treatment, but pericardiectomy is indicated for progressive symptoms despite medical therapy. Large scale studies explaining the natural history and prognosis are lacking. However, in a recent study by Kim et al. involving 205 patients, ECP was diagnosed in 33 (16%) patients but only two required pericardiectomy.6 The study further showed the reversibility of the constrictive physiology in patients with ECP, either spontaneously or with medical management. In our case, patient continued to have residual constriction and symptoms of heart failure more than 1.5 year on medical therapy, hence patient underwent radical pericardiectomy with improvement in symptoms. Thus, pericardiectomy is reserved for patients with failed medical treatment.

YOU ARE HERE: Home > Education and Meetings > Case of Effusive Constrictive Pericarditis Crossover to Surgery