Vulnerable1 and ruptured atherosclerotic plaques, are characterized by inflammation and high expression of lipoprotein-associated phospholipase A2 (Lp-PLA2).2,3 In the Lp-PLA2 studies collaboration meta-analysis of individual records from 79036 participants in 32 prospective studies, there was a continuous association between Lp-PLA2 activity and the risk of coronary heart disease (CHD) with a relative risk, per 1 standard deviation increase in Lp-PLA2 activity, of 1.10 (95% CI 1.05-1.16) adjusted for conventional risk factors.4 This finding is similar in magnitude to that with non-high-density lipoprotein (non-HDL) cholesterol and systolic blood pressure in this population. Additionally genetic studies have shown that the presence of the V279F null allele within the gene encoding Lp-PLA2 is associated with decreased CHD.5

Darapladib is a potent and reversible oral inhibitor of Lp-PLA2.6 Darapladib has been shown to reduce levels of Lp-PLA2 in atherosclerotic plaque, the necrotic core. and inhibited coronary artery lesion development in swine.7 Darapladib has also been shown to reduce Lp-PLA2 activity in human carotid plaque.8 In the Integrated Biomarkers and Imaging Study-2 (IBIS-2 study) in CHD patients, darapladib, compared with placebo over 12 months, halted progression of the secondary endpoint of coronary artery plaque necrotic core, as determined by intravascular ultrasound virtual histology.9 These findings suggest that darapladib could reduce CHD events by reducing necrotic core, and thereby decreasing vulnerable or unstable atherosclerotic plaques.1

The STabilisation of Atherosclerotic plaque By Initiation of darapLadIb TherapY (STABILITY) trial was a double-blind placebo-controlled, event-driven, international trial in which 15,828 patients with stable CHD were randomized to receive darapladib 160mg or placebo once daily on a background of optimal medical treatment. The primary endpoint was the composite of cardiovascular (CV) death, myocardial infarction (MI), or stroke. The first prespecified secondary endpoint was major coronary events comprising CHD death, MI, or urgent coronary revascularization for myocardial ischemia. Total coronary events were also assessed which included hospitalization for unstable angina and non-urgent coronary revascularization.

Standard of care was high in this trial; at baseline; 93% were on aspirin, 97% were on statins, 79% were on beta blockers, 34% were on P2Y12 inhibitors and 77% were on an angiotensin-converting enzyme or an angiotensin receptor blocker. These rates were maintained throughout the trial.

The treatment effect for the primary endpoint was consistent in almost all prespecified subgroups. The only interactions below the p=0.10 levels were among smokers and white patients p=0.04 and p=0.08, respectively. 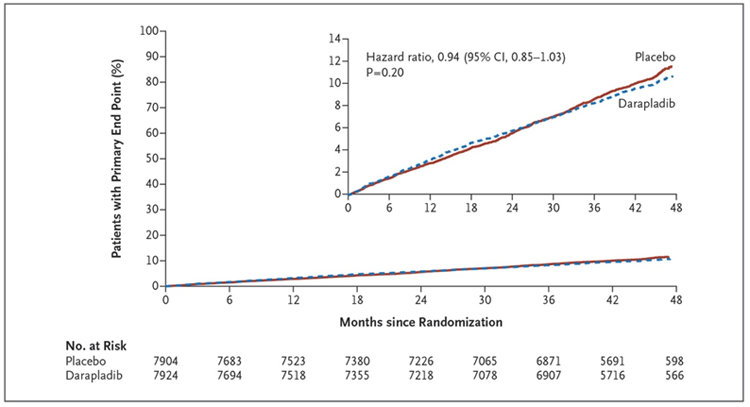 The number of patients having serious adverse events was similar in each group.

STABILITY is the first large trial to test a novel inflammatory pathway on a background of optimal medical treatment in patients with stable chronic CHD. The primary endpoint was not met but there was a signal of possible efficacy for the secondary endpoint of major coronary events with a nominally significant reduction of 10%.

The findings on total and major events should be considered exploratory and of uncertain significance in light of the lack of effect on the primary endpoint. The high rates of usage of evidence-based therapies may have reduced the proportion of events that were modifiable.

Further insights into the value of selective Lp-PLA2 inhibition on atherosclerotic cardiovascular events will include baseline and on-treatment Lp-PLA2 levels which were not available for this publication and other biomarker and genetic profiling.

YOU ARE HERE: Home > Latest in Cardiology > The Effect of Inhibition of Lp-PLA2 With Darapladib on Ischemic Events in Chronic CHD