A 55-year-old woman presented to vascular medicine clinic for evaluation of bilateral lower extremity pain that developed over the prior six weeks. She had a longstanding history of hyperlipidemia and tobacco abuse (14 pack-year history of smoking). The patient described fatigue and pain in the hips and thighs when walking. She noted symptoms after walking approximately 15 feet and recently applied for a handicapped parking pass because she was unable to walk from her parking garage to her office at work. She had no lower extremity ulcers or color changes in her feet. She was referred for evaluation by a neurologist; it was felt that her symptoms were not consistent with neurogenic claudication.

Given her symptoms, the patient was referred to the vascular laboratory. Physiologic testing including ankle-brachial indices (ABIs), segmental limb pressures and pulse volume recordings (PVRs) was performed (Figure 1). 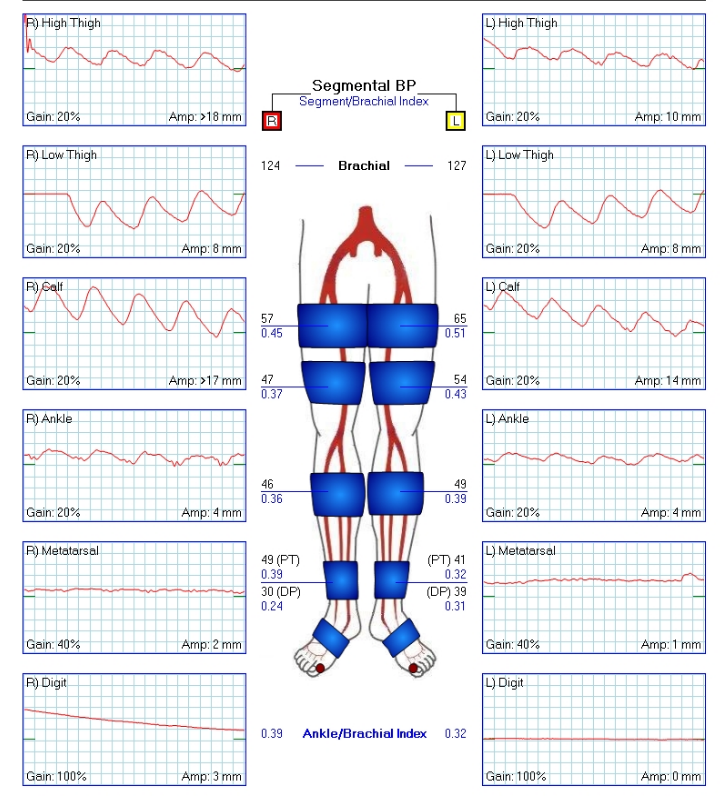 Based on the vascular study above, what is the severity of peripheral artery disease (PAD) and what is the level of disease?

The correct answer is: A. Severe PAD, aortoiliac disease.

The patient's ABIs were 0.39 and 0.31 for the right and left leg, respectively. A normal ABI is 1.0-1.4. An ABI >1.4 suggests non-compressible vessels. An ABI between 0.91-0.99 is borderline and an ≤0.9 is consistent with PAD. An ABI <0.4 is consistent with severe disease. The markedly dampened PVR waveforms at the ankles are consistent with this interpretation.

In the vascular study above, the 4-cuff method for segmental pressures and PVR testing was utilized. With this method, the high thigh pressure should exceed the brachial pressure by at least 30 mm Hg, and the thigh brachial index is general >1.1. The thigh brachial index is 0.45 and 0.51 on the right and left, respectively, which is consistent with aortoiliac disease. There are no significant drops in pressure (>20 mm Hg) across the remaining cuff segments, which rules out more distal disease. A significant pressure drop from high to low thigh would indicate superficial femoral artery disease, while gradient from high thigh to knee indicates distal femoral/popliteal disease, and a drop from knee to calf indicates infrapopliteal disease.

To further evaluate her anatomy and determine treatment options, contrast-enhanced tomography angiography (CTA) was performed which showed evidence of distal aortic occlusion (Figure 2) with reconstitution of the common iliac arteries. There was calcified plaque seen in the aortoiliac segments. 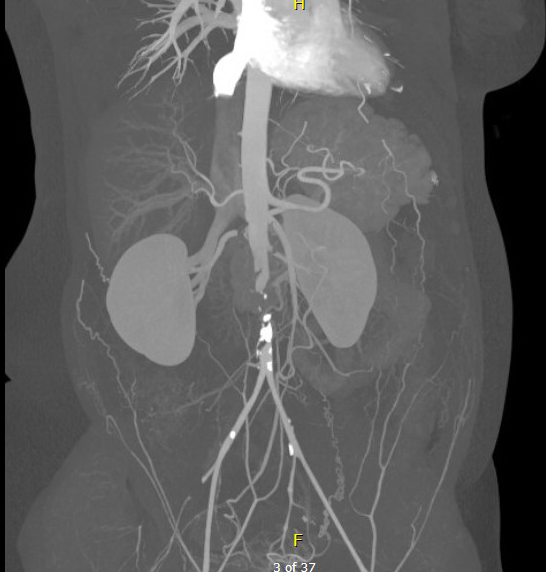 The patient was diagnosed with Leriche syndrome with thrombosis of the distal aorta. She was admitted and underwent catheter-directed thrombolysis of aortic occlusion. She underwent extensive arterial hypercoagulability testing (including lupus anticoagulant, JAK2 mutation) which was unremarkable. Ultimately, her aortic thrombosis thrombus was felt to be related to long standing PAD and atherosclerotic stenosis in the aorta. At the time of discharge, she was placed on aspirin 81 mg, warfarin, atorvastatin 80 mg and was counselled regarding importance of smoking cessation.

The patient returned to clinic for follow-up and continued to have symptoms of pain and fatigue involving bilateral hips and thighs with walking, though improved from her prior presentation. An aortic duplex ultrasound showed evidence of 50-99% stenosis in the distal aorta with peak systolic velocity shift from 90 cm/s to 438 cm/s. She subsequently underwent distal aortic stenting. Post-aortic stenting, the patient was maintained on aspirin 81 mg daily and her warfarin was discontinued. On further follow-up, her claudication had resolved and duplex ultrasound showed a patent aortic stent with no evidence of restenosis.

YOU ARE HERE: Home > Education and Meetings > 55-Year-Old Woman With Leg Pain With Walking