A 51-year-old African-American man, recently diagnosed with human immunodeficiency virus (HIV) and preserved CD4 count, presented to an outside hospital with 1 month of progressive exertional dyspnea associated with dry cough for the past 2 weeks. Computed tomography (CT) of the chest was remarkable for a large pericardial effusion as well as small pleural effusions and pulmonary nodules. Cardiac tamponade was noted to develop subacutely; however, this was promptly and successfully managed by fluoroscopic-guided pericardiocentesis. A sample of bloody pericardial fluid was obtained and sent to the laboratory for analysis. The etiology of the effusion was inconclusive given laboratory results, which included negative cytology. Ultrasound-guided thoracentesis of his pleural effusion was later performed, but this too was notable for negative cytology in an otherwise exudative fluid sample. Positron emission tomography-CT (PET-CT) with fluorodeoxyglucose (FDG) showed hypermetabolic uptake in the right atrium, suggestive of malignancy (Figures 1-2). Cardiac CT (Figure 3) and cardiac magnetic resonance imaging (MRI) (Figure 4) revealed a large, low-density mass in the right atrium with no extracardiac extension. 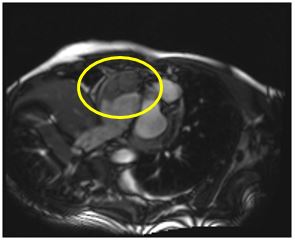 The patient was then transferred from the smaller satellite hospital where he had initially presented to our urban teaching hospital for further evaluation and management. On arrival to the cardiac intensive care unit, he was noted to be complaining of marked exertional dyspnea and orthopnea. Physical examination was remarkable for significant jugular venous distention associated with bilateral pitting edema of the lower extremities. In the subsequent hours, the patient's condition continued to deteriorate, leading to the development of hypoxic respiratory failure with hemodynamic instability, requiring intubation and vasopressor support. Transthoracic echocardiography (TTE) was performed with poor visualization of a large mass within the right atrium (Figure 5). Image quality was impaired by patient positioning and mechanical ventilation. Thus, transesophageal echocardiography (TEE) was pursued, which noted a 4-cm-wide, heterogeneous, irregular, echogenic mass infiltrating the right atrial lateral free wall and protruding into the right atrium. The mass had multiple mobile, finger-like projections floating in the atrial cavity (Figures 6-7). Right ventricular systolic function was borderline reduced, and left ventricular function was preserved. The venae cavae and tricuspid valves were spared without obstruction. 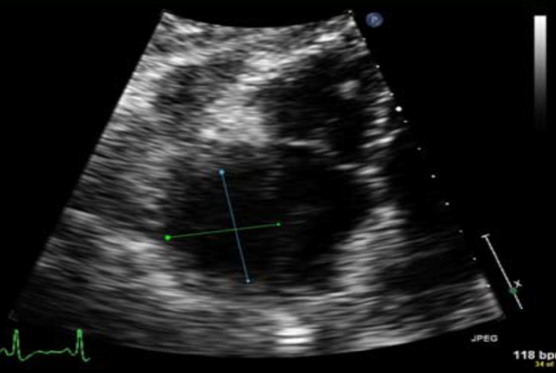 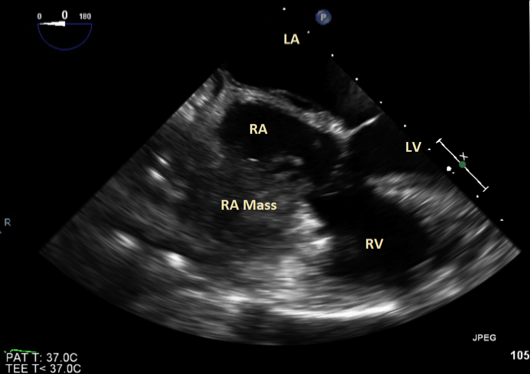 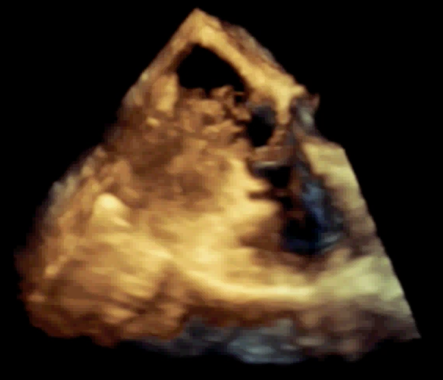 What is the best next step to confirm a diagnosis?

Primary cardiac tumors are rare, with a lifetime incidence of 0.02%. Metastasis to the heart is approximately 40 times more common. Of all cardiac tumors, 75% are benign, and half of those are cardiac myxomas. Only 25% of primary cardiac tumors are malignant, 75% of which are sarcomas. Angiosarcoma is the most common primary cardiac malignancy, composing one-third of cases.1 Early diagnosis of a cardiac tumor is often difficult because patients typically do not experience symptoms until late in the disease process. The presentation is often variable and non-specific, with the most common presenting symptom being dyspnea, but cough, heart failure, and arrhythmia may also be noted. Cardiac sarcomas usually originate in the right atrium, and cardiac myxomas are more common in the left atrium. Imaging findings suggestive of malignancy are tumor invasion, right-sided lesions, and an associated pericardial effusion.2

Echocardiography is typically the initial imaging modality utilized for diagnosis, having a sensitivity of 93.3% to detect a cardiac mass by TTE and 96.8% by TEE.3 Pericardiocentesis typically yields bloody or necrotic tissue, yet cytology is nearly always negative for malignancy, even in the setting of pericardial infiltration.4,5 Cardiac CT is utilized as a supplement to echocardiography, and cardiac MRI is utilized for tissue characterization and in the analysis of tumor infiltration. FDG PET-CT identifies malignant tumors with 100% sensitivity, but this may not be specific. Cardiac catheterization with atriography or ventriculography could be helpful in determining extent of tumor invasion.6

Imaging findings may be highly suggestive of a diagnosis, but no imaging modality can replace tissue biopsy to make a final diagnosis. Additionally, given the poor diagnostic utility of pericardiocentesis in such cases, a pericardial fluid sample with a negative cytology result must be followed up with tissue biopsy. Tissue specimens can be obtained by surgical exploration (e.g., thoracotomy) or by percutaneous EMB. Percutaneous (transvascular or transvenous) biopsy is less invasive than surgical biopsy and is relatively safe, with a rate of serious acute complication being less than 1% using flexible bioptome catheters.7,8

EMB is performed under fluoroscopic or echocardiographic guidance. Echocardiography allows direct visualization of the endocardial border and can be performed in critically ill patients at the bedside without additional risks or disadvantages of transporting the patient for access to fluoroscopy. Additionally, echocardiographic guidance, compared with fluoroscopy, provides greater accuracy with regard to bioptome positioning to ensure sampling of the proper structure or site. This likely confers greater sample quality and a lower risk of complications. Compared with TTE, TEE guidance generally affords superior anatomic definition of a cardiac mass and the endocardial surface, as well as localization of biopsy forceps.9 Studies suggest no difference in performing EMB by either right internal jugular or femoral vein approach.10

Clinical evidence, particularly imaging, was highly suggestive that this patient's mass was a primary cardiac malignancy (e.g., sarcoma). Kaposi sarcoma, which pathologically overlaps with cardiac angiosarcoma, was a consideration given the patient's recent HIV diagnosis. However, preserved CD4 count and no history of dermatologic Kaposi made this less likely. Another distant possibility was primary cardiac lymphoma. This malignancy is extremely rare but usually occurs in immunocompromised individuals.

The patient's pericardial cytology was negative; therefore, tissue biopsy was required to confirm a diagnosis. Due to his poor clinical state, the patient was a poor candidate for surgery. Surgical resection also was unlikely to be indicated given the previously noted lung nodules on CT imaging, which were suspicious for metastases. Thus, EMB was utilized. EMB of the right atrial mass was performed under TEE guidance to minimize risk of complications such as perforation of the free right atrial wall. Due to the relative thinness of the atrial walls, there is an increased risk for complications when sampling from within this chamber compared to within the ventricle. Percutaneous EMB was performed following venous access by right femoral vein. Under TEE guidance, the bioptome catheter was advanced up the inferior vena cava and into the right atrium. It was then reoriented, and several tissue samples were obtained for analysis. This procedure was completed without any complications (Figures 8-9). Histological examination of the retrieved samples revealed malignant disease containing atypical spindle cells lining anastomotic vascular channels (Figure 10). Immunochemistry confirmed a vascular origin, including positivity for endothelial markers CD31 and CD34. These findings were supportive of the diagnosis of primary angiosarcoma. 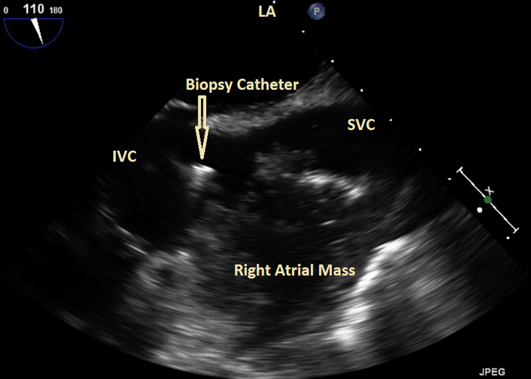 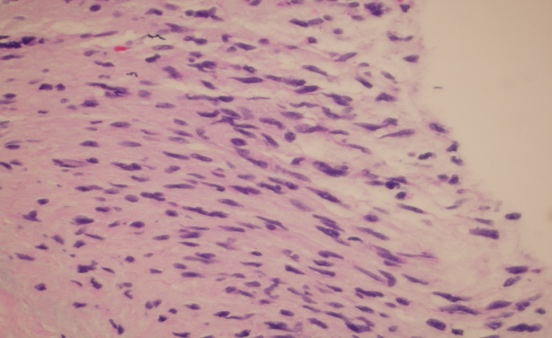 Unfortunately, the patient's overall condition continued to decline. In a matter of days, he passed away from multi-system organ failure associated with the presumed continuous showering of tumor emboli to his lungs consistent with pulmonary tumor emboli syndrome or pulmonary tumor thrombotic microangiopathy. Tumor emboli syndrome is a condition characterized by invasion of malignant cells into the circulatory system. The tumor emboli do not spread or proliferate locally and are not considered metastases, but they do lead to end organ damage similar to other embolic phenomena.

YOU ARE HERE: Home > Education and Meetings > A Right Atrial Mass Associated With Cytology-Negative Hemopericardium in a Patient With HIV