A 64-year-old woman with a medical history of B-cell non-Hodgkin lymphoma was found to have left ventricular (LV) dysfunction with an ejection fraction (EF) of 20% by echocardiography 1 year after completing treatment with mediastinal radiation and 8 cycles of doxorubicin, rituximab, and cytoxan. Evaluation at that time included a left heart catheterization that revealed no coronary artery disease. She had no documented hypoxia. A follow-up echocardiogram 8 years later showed improvement in LVEF to 45-50%. The patient was well-compensated for several more years but now presented with 2 months of progressive exertional dyspnea. Vitals were notable for a blood pressure of 99/59 mmHg with a heart rate of 66 bpm and an oxygen saturation of 98% on room air. Physical exam revealed a 2/6 systolic murmur at the upper right and left sternal borders and trace lower extremity edema. A chest x-ray showed a mildly enlarged cardiac silhouette. The electrocardiogram showed left axis deviation. A transthoracic echocardiogram showed a moderately dilated LV with severe global hypokinesis and EF of 15-20%. Right ventricular (RV) size and function were normal, with an estimated RV systolic pressure of 61 mmHg. A right heart catheterization at an outside institution demonstrated a right atrial pressure of 9 mmHg, RV pressure of 42/14 mmHg, mean pulmonary artery pressure of 27 mmHg, and pulmonary capillary wedge pressure of 21 mmHg. A repeat right heart catheterization after diuresis and medical optimization showed improved filling pressures but importantly demonstrated a step up in oxygen saturation in the left brachiocephalic vein (Tables 1-2). 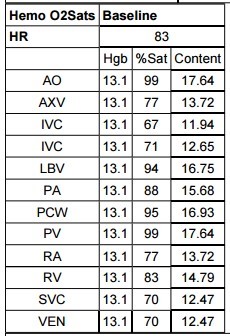 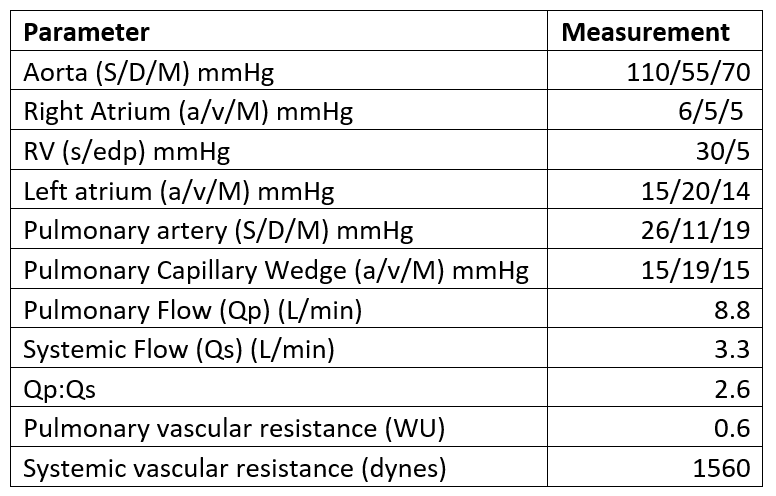 The findings above prompted cardiac magnetic resonance imaging (MRI) for further evaluation of the cardiomyopathy and identification of the etiology of the left-to-right shunt. Cardiac MRI showed severe LV dysfunction (calculated EF of 21%) and a mildly dilated RV with normal systolic function (Figure 1). There was no delayed hyperenhancement to suggest scar or infiltrative cardiomyopathy (Figure 2). A vertical vein was identified connecting the left upper pulmonary vein to the left brachiocephalic vein (Figure 3). Velocity flow mapping with cardiac MRI resulted in a Qp:Qs of 2.7. Repeat catheterization with angiography confirmed the diagnosis of a partial anomalous pulmonary venous connection (Figure 4) with a Qp:Qs of 2.64. What is the most likely etiology of this patient's dyspnea?

Partial anomalous pulmonary venous connection is a rare congenital defect that is often discovered due to RV enlargement in asymptomatic patients.1,2 Anomalous pulmonary veins typically arise from the right lung. The most commonly reported abnormality is a connection of a right pulmonary vein to the superior vena cava and less frequently to the right atrium or inferior vena cava. Only 3-8% of anomalous connections have been reported to originate from the left lung connecting to the left brachiocephalic, as in this case.3

In this patient, late onset progressive doxorubicin cardiotoxicity resulted in ventricular dysfunction 1 year after administration; however, it did not result in clinical heart failure until 1 decade later. This likely represents type 1 anthracycline toxicity, which is irreversible cardiomyocyte death, compared with type 2 anthracycline toxicity, which is caused by cardiomyocyte dysfunction and is reversible.4 The risk factors for developing doxorubicin-induced cardiotoxicity include total cumulative dose, frequency of administration, prior mediastinal radiation, concomitant administration of other cardiotoxic agents, extremes of age, and female gender.5 The patient's development of chemotherapy-induced LV dysfunction likely unmasked her congenital defect due to provocation of a worsening left-to-right shunt. In normal physiology, each pulmonary vein accounts for approximately 25% of the total pulmonary blood flow; however, in partial anomalous pulmonary venous return, shunt flow can be higher because the circulation is preferentially directed to the lower pressure chamber, thereby creating increased flow to the right atrium rather than the left atrium. This effect is magnified in conditions that elevate left atrial pressures such as high LV end-diastolic pressure from cardiomyopathy, as in this patient.6

This case is an excellent example of the application of cardiac MRI to diagnose congenital heart disease in a patient with chemotherapy-induced cardiomyopathy. Partial anomalous pulmonary venous connection has traditionally been diagnosed by angiography or with echocardiography to assess shunt fraction. Despite this, certain anatomy can be unfavorable for echocardiographic quantification. Velocity flow mapping with cardiac MRI has been shown to accurately assess left-to-right shunting.7 In this case, cardiac MRI quantification of the shunt fraction correlated well with findings from the right heart catheterization and was useful for guiding treatment strategy.

The definitive treatment for left partial anomalous pulmonary venous connection is surgical correction. It is usually performed in symptomatic patients or asymptomatic patients with a Qp:Qs >1.5 with evidence of RV dilatation, mild-moderate tricuspid regurgitation, or pulmonary hypertension.8,9 Asymptomatic patients can be observed clinically if they lack the presence of a significant left-to-right shunt and have no evidence of RV dysfunction. Additionally, this patient should be treated with an angiotensin-converting enzyme inhibitor or angiotensin-receptor blocker as well as a beta-blocker based on the American College of Cardiology/American Heart Association 2017 guidelines for treatment of cardiomyopathy. As in this case, an aldosterone receptor antagonist can be added for patients already on an angiotensin-converting enzyme inhibitor or angiotensin-receptor blocker and beta-blocker with New York Heart Association Class II-IV and an LVEF ≤35%.10

The patient remained functionally limited despite diuresis and medical optimization; therefore, she was referred for surgical repair of partial anomalous venous return. She underwent a left lateral thoracotomy and ligation of the vertical vein. Her post-operative course was uncomplicated, and she was noted to have improvement in her dyspnea on follow-up.