A Master Athlete with CAD During the COVID-19 Pandemic

A 54-year-old healthy active female runner with no significant past medical history presents with dyspnea on exertion. She is training for a marathon, of which she has run many, and noted that early in her runs she would become significantly short of breath, out of proportion to workout intensity. She felt it might be due to exercise-induced asthma, as it resolved with slowing her pace and she could continue her training run. Despite her history of asthma, her symptoms raised concern for "warmup angina". An exercise single photon emission computed tomography (SPECT) stress test was ordered for further evaluation. She completed 15 metabolic equivalents of task (METs) without developing test limiting symptoms or significant arrhythmia. Although imaging demonstrated normal perfusion, her electrocardiogram (ECG) was notable for 2mm ST depressions that developed in stage 4 persisting into recovery with frequent ventricular ectopy that developed in recovery. She was subsequently sent for a coronary computerized tomography (CT) angiography which showed a calcium score of 193 (98th percentile) and a severe, 70-99% proximal mixed plaque stenosis of the left-anterior-descending (LAD) coronary artery without evidence of other obstructive coronary artery disease. (Figures 1-2). 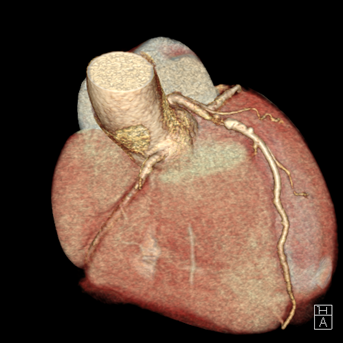 She was quickly brought to the catheterization lab where an estimated 80% LAD stenosis was confirmed. Optical coherence tomography (OCT) was performed demonstrating a moderate diffuse, lipid rich plaque with no significant calcification nor evidence of dissection in the vessel. The lesion was successfully stented (Figure 3) and proper expansion was confirmed again by OCT. Her low-density lipoprotein (LDL) at baseline was 77mg/dL and high-density lipoprotein (HDL) was 139mg/dL. She was started on dual antiplatelet therapy and a high intensity statin. A beta blocker was not started due to concerns for its effect on exercise tolerance. 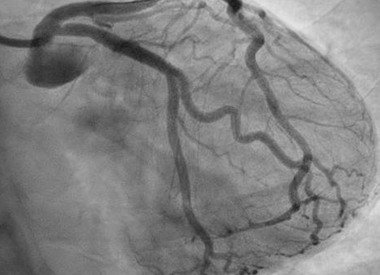 The patient has recovered well from her stenting procedure and at her follow-up appointment is asking for guidance about how to safely return to running. Cardiac rehabilitation is closed due to the COVID-19 pandemic as are all the nearby gyms.

What guidance would you give this patient on how to safely return to activity during the COVID-19 pandemic where traditional cardiac rehabilitation is not readily available?

The correct answer is: C. The patient did not present with ACS so once she is recovered from her PCI she should gradually return to her former level of activity following an at-home, graduated exercise program using a heart rate monitor to help guide her activity level.

Although this athlete did not have ACS, she had symptomatic and significant obstructive SIHD and has undergone successful percutaneous revascularization. As a competitive endurance athlete with ischemic heart disease, she represents a large, but under-discussed patient population. Historically, our patient's return to exercise would have been guided by CR using symptoms, heart rate, and telemetry in a monitored clinical setting. While flexible, CR is targeted towards a population with a much lower exercise capacity than the Masters athlete population and is not well suited to guide them back to competitive athletics. CR carries a class Ia recommendation for post-MI, PCI, and chronic stable angina by ACC/AHA guidelines and is associated with a 26-31% reduction in cardiac mortality.3-5 Unfortunately, the COVID-19 pandemic has severely limited the availability of cardiac rehabilitation with 71% of programs temporarily closing to in-person CR; however 38% of programs continue to offer some form of at-home program or other innovative forms of delivery.6

In 2019 the AHA, ACC and American Association of Cardiovascular and Pulmonary Rehabilitation (AACVPR) published a joint statement on the utility and viability of home-based CR (HBCR), including using remote coaching and indirect supervision. This statement concluded that HBCR may be a reasonable option for low to moderate risk patients who are eligible for CR but unable to attend a traditional CR program. They also noted that several countries including the United Kingdom, Australia, and Canada have incorporated HBCR into their healthcare systems with improvement in the percentage of patients participating in CR.7,8 In a time when traditional CR is not available due to a global pandemic, a graduated at-home program based on heart rate, perceived exertion, and symptoms in this motivated patient, who is already familiar with the use of a heart rate monitor to gauge her exercise, would be a reasonable approach to guide her back to her previous level of activity.

There is a wide range of readily available exercise protocols that focus on a gradual return to activity over a 12-week time span. However, most are designed for sedentary patients and would not be applicable or useful for this patient. Use of a heart rate monitor chest strap should also be recommended, as there is evidence to suggest greater accuracy and reliability compared to wrist-based monitors.9 A sample exercise prescription we would support for this patient is shown (Table 1) and includes a gradual increase in exercise intensity and duration. Stage III of a typical outpatient CR program includes 36 sessions spread out over 12 weeks, however, given the patients high baseline functional status and complete revascularization, an expedited approach is reasonable, and a 4-week protocol is proposed. If symptoms recur, she has been advised to contact her cardiologist and to decrease her maximum exercise intensity to the previous stage. With her goal to return to racing, symptoms at any level of exertion should prompt repeat exercise stress testing. We would recommend she plan on exercising 3-5 days per week following the prescription below.

Most algorithms that use max predicted heart rate use the well-known formula "220-age" to determine the maximum predicted heart rate. However, other formulas have been validated as being more accurate for various subpopulations including adolescents and older adults.10,11 Another tool that could be helpful in guiding Masters athletes back to competition is cardiopulmonary exercise testing (CPET). In small populations, it has been shown that heart rate at ventilatory anaerobic threshold determined by CPET preceded the heart rate at ischemic threshold on ECG exercise stress testing in approximately 90% of patients with known cardiovascular disease.12 If available, it would also be reasonable to use CPET to more accurately guide Masters athletes back to competitive exercise knowing that for the large majority of patients the heart rate at anaerobic threshold is lower than the ischemic threshold. However, given the resource limitations during the pandemic, it would be reasonable to follow a protocol based on "220-HR" in this patient with a normal left ventricular ejection fraction (LVEF) and no residual obstructive CAD.

Factors associated with an increased risk of adverse cardiac event in athletes with ASCAD include LVEF < 50%, poor exercise tolerance, exercise induced ischemia or arrhythmia, and residual coronary stenosis > 50%.2 Our patient only had exercise-induced ischemia on ECG without SPECT perfusion evidence of ischemia prior to her revascularization. It would be reasonable to obtain a resting echocardiogram as well to ensure that she has no structural heart disease or resting wall motion abnormalities that put her at increased risk of malignant arrhythmia; notably, LVEF on her SPECT imaging was preserved.

Answer choice A, pursing exercise treadmill stress testing, would be a reasonable option as well and exercise stress testing post-ACS is recommended prior to returning to competitive athletics.1 However, this patient did not have ACS and had a prior treadmill stress test that only showed ECG evidence of ischemia at high levels of exertion. Our patient displayed the pattern of warmup angina in which her symptoms were only experienced early in exercise, dissipated with a brief slowdown in pace, and did not return with subsequent increased intensity exertion. Warmup angina is a well-documented phenomenon where the ischemic threshold is significantly raised on a second exertion after a first, lesser exertion. This has been documented both subjectively with symptoms of ischemia and objectively on ECG stress testing. The exact mechanism remains undefined but is thought to be due to several factors including ischemic preconditioning and improved ventriculo-vascular coupling. She has since undergone complete revascularization with no residual obstructive CAD on coronary angiography. Repeat stress testing is likely of marginal benefit compared to a graduated at-home program guided by heart rate and symptoms. It also contributes to unnecessary health care exposure during a time when extensive attempts are being made to limit unnecessary in person contact between patients and the health care system.

Answer B is incorrect because, though our patient did have significant proximally LAD disease, she is now completely revascularized without any of the other risk factors for adverse events. It has been clearly demonstrated that with proper supervision it is safe for athletes post-PCI to return to high levels of physical activity. It would also not be appropriate for her to wait until traditional, in-person CR opens given that it is unclear how long this pandemic will continue to limit availability of traditional CR. In patients post-ACS it has been demonstrated that increased physical activity in the first year post-event is associated with reduced mortality.13 It is reasonable to extrapolate this to patients with SIHD post-PCI as well.

Lastly, the patient should not immediately resume strenuous activity without some form of monitoring. Given the significant reductions in cardiac mortality with CR for patients with ASCAD post-PCI without ACS, it would be most appropriate for her to participate in some form of graduated exercise program prior to resumption of competitive athletics.

YOU ARE HERE: Home > Education and Meetings > A Master Athlete with CAD During the COVID-19 Pandemic