Recurrent Pericarditis Post-Pericardiectomy: "Does a Stitch in Time Save Nine?"

A 40-year-old female presents to the office with recurrent symptoms of pericarditis. Her symptoms are typical for a flare of her recurrent pericarditis, which include pleuritic chest pain radiating to her left shoulder, shortness of breath and constitutional symptoms of feeling unwell and lethargic.

In the last five years, she has had approximately 16 flares of chest pain, three emergency department visits for chest pain, two of which required overnight admissions, and a pericardiocentesis. Her symptoms began six weeks post mitral valve surgery. Her autoimmune serology workup was weakly positive for antinuclear antibodies. No relevant family history of connective tissue disease or vasculitis.

She was initially treated with ibuprofen and colchicine, with the addition of prednisone and azathioprine commonly referred to as quadruple therapy. Due to an intolerance of azathioprine, she was then commenced on anakinra as a steroid minimizing immunosuppressant.

Despite various combinations of immunosuppressant therapies, her symptoms remained debilitating, with ongoing steroid dependence. The decision was made to undergo a radical pericardiectomy. Pathology of the excised pericardium exhibited fibrous adhesions macroscopically, with neovascularization and sparse acute and chronic inflammatory cell infiltrate microscopically.

She enjoyed a brief symptom free period post-pericardiectomy, however experienced further flares when her anakinra and colchicine were tapered.

She had a repeat cardiac magnetic resonance imaging (MRI) (CMR) during a presentation to the hospital with a flare post-pericardiectomy, which demonstrated circumferential inflammation in a region that was defined on T1 black blood imaging (Figure 1), Black Blood STIR Imaging, (Figure 2a), PSIR sequence post-gadolinium contrast (Figure 2b),  and PSIR Fat Sat LGE sequence (Figure 2c). A novel T1 MOLLI mapping sequence that is specific for fibrosis and edema confirmed the findings of the previous sequences with the demonstration of increased values circumferentially (Figure 2d).

Her dose of anakinra was up titrated and she is on intermittent ibuprofen in addition as ongoing maintenance therapy. A repeat CMR demonstrated normalization of her T1 MOLLI mapping values in the sub visceral pericardial region that was previously elevated, suggestive of resolution of the previously demonstrated inflammation and edema. (Figure 2e) 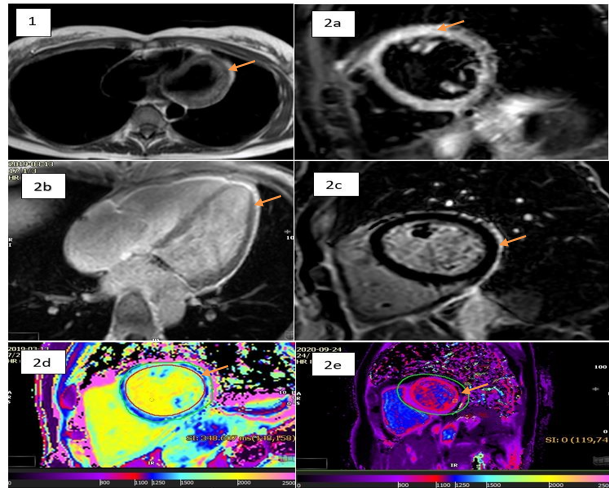 What is the potential cause of ongoing inflammation and/or symptoms of pericarditis in this patient post pericardiectomy?

The correct answer is: C. Inflammation of the epicardial fat layer.

Clinical outcomes of patients post-pericardiectomy for recurrent pericarditis are still undefined. A retrospective cohort study demonstrated that pericardiectomy was associated with a statistically significant reduction in the number of flares experienced in comparison to medical treatment alone.3 As was demonstrated in this case, the persistence of symptoms and/or recurrence of flares post-pericardiectomy have been described, with various hypothesis as to the source of ongoing inflammation post-radical excision of the pericardium.2,3

Cardiac magnetic resonance imaging (CMR) has emerged as an excellent modality for the evaluation of myo-pericardial scarring and/or inflammation.4-7 T1 Black blood imaging can be used to identify and quantify epicardial fat beneath the visceral pericardium, which is not removed at time of pericardiectomy.8 The application of CMR based edema sequences such as T2 STIR or novel T1 mapping techniques may then be utilized to evaluate for ongoing inflammation within this epicardial fat layer, that may be contributory to ongoing symptoms and recurrent flares post-pericardiectomy.9

CMR and novel CMR based edema sequences may help guide the management of patients post-pericardiectomy. CMR can also be utilized to better predict patients who may derive a benefit from a prolonged duration of immunosuppressant therapy post-surgery, for optimal symptomatic benefit.

YOU ARE HERE: Home > Education and Meetings > Recurrent Pericarditis Post-Pericardiectomy: "Does a Stitch in Time Save Nine?"