Defining the Underlying Cause of Pericarditis

A 59 year-old male presents to cardiology clinic for exacerbations of recurrent chest pain. His first episode occurred a year ago when he noticed a fever of 102.7F, palpitations and pleuritic chest pain. He had no prior medical conditions and no recreational drug use. Family history was notable for a sister with lupus and mother with Behcet's syndrome although he lacked rheumatologic symptoms or signs on exam. His CRP was 15.6mg/L (<3mg/L) and ESR was 12mm/hr (0-15mm/hr). A left heart catherization was performed and showed nonobstructive coronary artery disease. He then had a cardiac magnetic resonance imaging (MRI/CMR) that showed mildly thickened pericardium with late gadolinium enhancement of the pericardium without pericardial effusion or abnormal ventricular septal motion (Figure 1C). He was diagnosed with acute pericarditis. He was discharged on colchicine and ibuprofen for 6 months.

Unfortunately, 10 days after stopping this regimen after his 6 months course, he developed another episode of chest pain again with fever and dyspnea. His original dose of colchicine was doubled, and ibuprofen was restarted. His symptoms gradually resolved on this dual anti-inflammatory regimen.

He then had his third episode of angina two months later despite still being on therapy. In the emergency department, they diagnosed him with pericardial tamponade and by cardiothoracic surgery performed a pericardial window. Both the pericardial fluid cultures and the tissue culture grew Cutibacterium acnes, formerly known as Propionibacterium acnes. Inflammatory markers were elevated with CRP 138.8mg/L and ESR of 9 mm/hr. Infectious disease was consulted and recommended a two-week course of intravenous ceftriaxone. After which, he transitioned to doxycycline, however, he had recurrence of his chest pain that was resolved with increasing the antibiotic dosage. During this time, he had an outpatient rheumatology visit where they noted a history of dry eyes and chronic hip pain attributed to leg braces as a child. Their workup was significant for ANA titer of 1:160 with speckling as well as a positive anti-SSA titers of 166. Antibodies for SSB, cyclic citrullinated peptide, double stranded-DNA, Smith, ribonucleoprotein were unremarkable as were complement levels and serum protein electrophoresis. Given his family history of lupus and Behcet's syndrome along with these titers, he was offered hydroxychloroquine but declined.

Ten months after his initial episode, he had his fourth pericarditis flare. His CRP was 293mg/L and ESR was 33 mm/hr. Transthoracic echocardiogram revealed a small pericardial effusion and his regimen of colchicine and ibuprofen was continued.

He then presents to the pericardial clinic a month after his most recent exacerbation where he noted intermittent chest pain with radiation to the shoulders that was worse when lying down and exertion. He was on colchicine 1.2mg daily, indomethacin 500mg twice a day, doxycycline 100mg twice a day and atorvastatin 20mg daily. Physical exam was unrevealing. Laboratory studies at this visit showed normal inflammatory markers with CRP 0.8 mg/L and ESR of 2mm/hr along with unremarkable rheumatology workup including ANA, Rheumatoid Factor and IL-6. Electrocardiogram (ECG) showed normal sinus rhythm with left ventricular hypertrophy (Figure 1A). Chest X-ray was unremarkable. Transthoracic echocardiogram revealed normal diastolic function based on mitral inflow and tissue Doppler and did not show pericardial effusion, annulus reversus or respirophasic shift (Figure 1B). Cardiac MRI showed improvement of mildly thickened pericardium with persistent late gadolinium enhancement (Figure 1D). 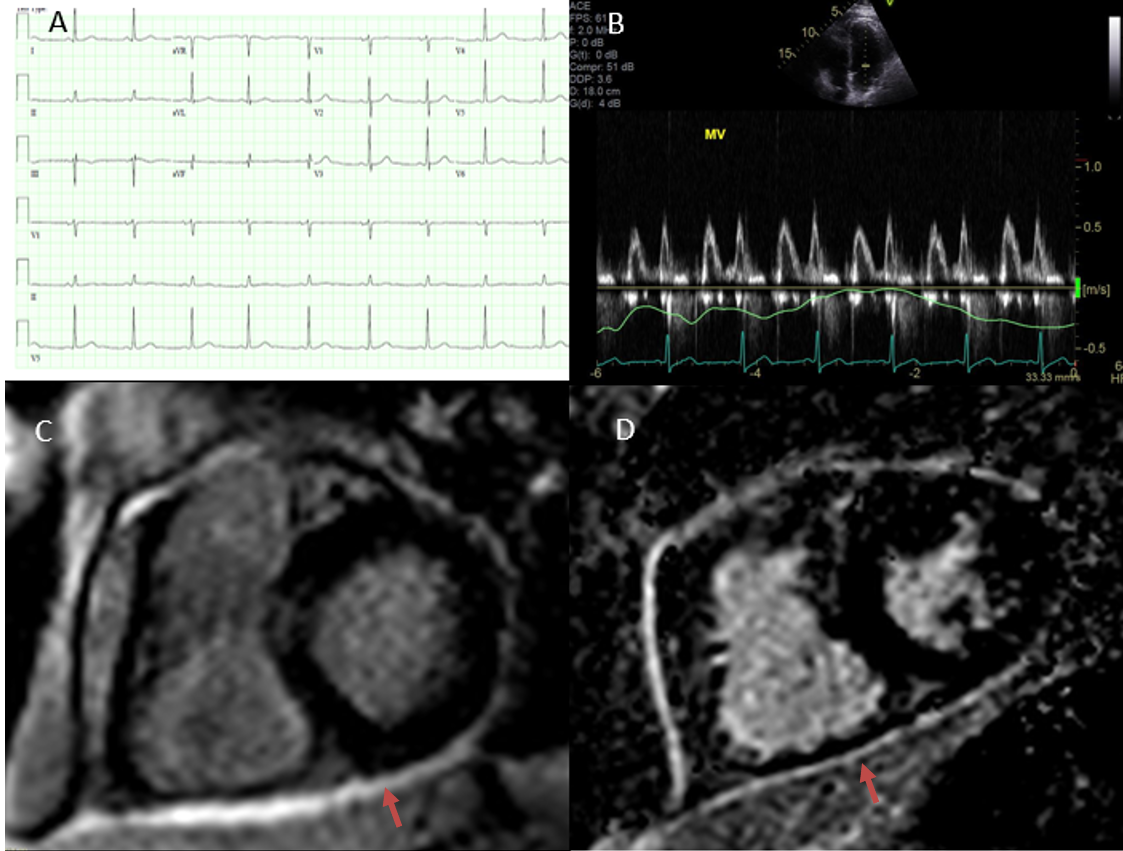 How would you treat this patient's chronic, recurrent pericarditis?

The correct answer is: B. Continue dual therapy but add hydroxychloroquine and stop doxycycline.

In this case, the treatment for this patient's recurrent, chronic pericarditis depended on the etiology. With his pericardial cultures positive for Cutibacterium acnes and elevated anti-SSA and ANA titers, he had potentially two etiologies for his pericarditis: autoimmune and infectious. Other etiologies of pericarditis include idiopathic, viral and post-procedural.1,2 We referred him to our institution's rheumatology and infectious disease clinics.

Rheumatology noted an autoimmune etiology of pericarditis may be possible with positive ANA and a strong family history despite lack of definitive symptoms. The patient was started on hydroxychloroquine 400mg daily. In general, rheumatologic causes of pericarditis can be divided into systemic autoimmune diseases and vasculitides. Lupus and rheumatoid arthritis are more commonly associated with pericardial effusions and pericarditis than Sjogren's syndrome.3 Common vasculitides include eosinophilic granulomatosis with polyangiitis, Takayasu disease and Behcet's syndrome.2,3 Recurrent pericarditis is typically linked with systemic signs of the underlying rheumatologic condition.

Our infectious disease specialist noted that his history was not consistent with pyogenic pericarditis and noted that the timing of his first episode occurred during late summer and may have been a possible viral infection. Common infectious causes of pericarditis can be divided mainly into viral and bacterial, with fungal and parasitic being much less common, especially in developed areas. Viral causes include enterovirus, herpesvirus and adenovirus, while bacterial include Mycobacterium tuberculosis, Coxiella burnetii and Borrelia burgdorferi.2 Cutibacterium acnes is usually a contaminant in pericardial fluid cultures and very rarely is a cause of purulent pericarditis.4

In our case, this patient had recurrent visits to the emergency department. The decision to admit or discharge an initial presentation of acute pericarditis may prove challenging given the range of presentation and underlying etiologies. The 2015 European Society of Cardiology guidelines recommend admission for patients who have signs and/or symptoms of an underlying etiology along and/or one or more predictors of poor prognosis including fever, subacute onset, large effusion, tamponade, refractoriness to NSAIDs, trauma, immunocompromised, myopericarditis or taking anticoagulation. Additionally, patients at high risk for deterioration or those with major and minor risk factors should undergo a full workup for the etiology of their pericarditis including autoimmune, autoinflammatory, tuberculosis, viral and malignancy based on clinical suspicion. Recurrent pericarditis can generally be treated as outpatient unless they carry a poor prognosis.5

While the patient lacked definitive symptoms of autoimmune disease, his strong family history and elevated autoimmune markers were concerning for a rheumatologic etiology of pericarditis. Unlike post-procedural or infectious causes of pericarditis, duration of treatment for rheumatological pericarditis requires a more chronic course of therapy encompassing disease-modifying antirheumatic drugs, steroids and biologics. Ultimately, identifying the cause of pericarditis can be challenging but remains essential in guiding treatment of the disease.

YOU ARE HERE: Home > Education and Meetings > Defining the Underlying Cause of Pericarditis