A 58-year-old male presented to clinic for management of recurrent pericarditis. Two years ago, he underwent aortic valve replacement with size 25 Carpentier-Edwards valve. Pre-existing medical problems include heart failure with reduced ejection fraction, supraventricular tachycardia, hyperlipidemia, and hypertension. Prior to this visit, the patient had four episodes of pericarditis within a year which were treated with ibuprofen and steroid taper. His echocardiogram showed moderate concentric left ventricular hypertrophy and moderate pericardial effusion. During these recurrences, he was treated with a short course of colchicine and tapering dose of steroids over 2 weeks.

At this point, he presented to the clinic with episodic chest pain, exertional dyspnea, and a weight gain of 10 pounds over 1-year period. His blood pressure was 118/73 mmHg, pulse rate was 70 beats per minute and oxygen saturation 97% on room air. On auscultation his lungs were clear and cardiac auscultation was unremarkable for any rub or murmurs. No jugular venous distension or Kussmaul's sign was detected. In the lower extremities, 1+ pitting edema bilaterally was noticed. Laboratory investigations revealed ultra-sensitive C-reactive protein (us-CRP) level of 1.6 mg/L (normal less than 3.1 mg/L) and angiotensin converting enzyme (ACE) of 52 U/L (normal less than 49 U/L). His transthoracic echocardiogram showed an ejection fraction of 35%. His cardiac magnetic resonance imaging (CMR) (Image 1) demonstrated areas of pericardial prominence with maximal thickness of 3 mm along the free wall of right ventricle (red arrow), mild pericardial delayed enhancement along the free wall of the entire cardiac base and mid septum, prominent nodules in the right upper lung lobe (blue arrow) and significant mediastinal adenopathy, which were concerning for sarcoidosis.

Patient was referred to pulmonology and a cardiac positron emission tomography (cPET) scan was performed. The cPET scan (Image 2) showed areas of enhanced uptake in the basal anteroseptal and basal inferolateral myocardial segments concerning for myocardial inflammation and hence, a diagnosis of cardiac sarcoidosis along with pericarditis was established. Disease modifying anti-rheumatic drugs (leflunomide and methotrexate) were prescribed. For management of recurrent pericarditis, prednisone 40 mg, ibuprofen 800 mg thrice daily and colchicine 0.6 mg twice daily. Patient reported improvement and did not have further recurrence of pericarditis. 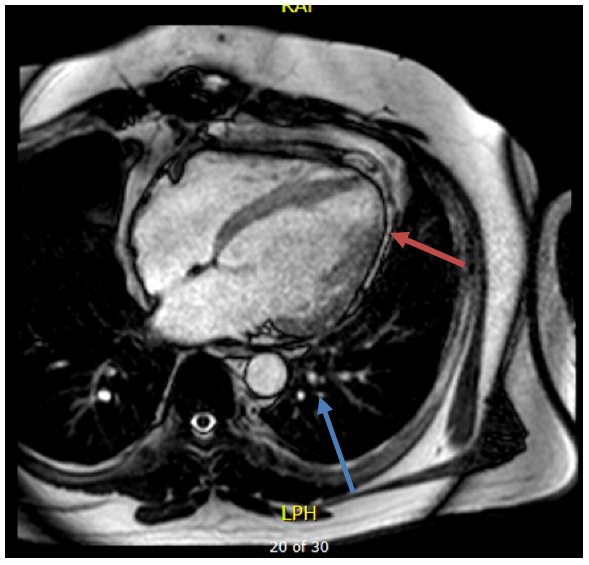 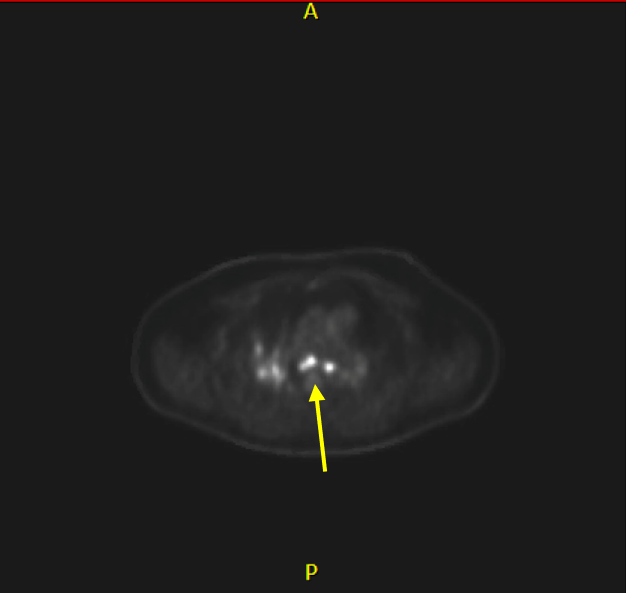 What is the next best step in preventing future recurrences?

The correct answer is: C. Adequate control of underlying sarcoidosis.

Our patient reported improvement after receiving DMARDs and anti-inflammatory therapy. Targeted approach of attaining adequate control of underlying autoimmune disease as the main strategy, ibuprofen and colchicine are the first line agents for the treatment of RP followed by corticosteroids (second line), DMARDS/biologics (third line) and pericardiectomy (fourth line).1,2 This involves multi-disciplinary care co-ordination between cardiologist, rheumatologist, and primary physician as well as careful monitoring.1

Sarcoidosis is an autoimmune disorder characterized by the formation of noncaseating granuloma involving multiple organs, including the heart (approximately 5% patients). The most commonly involved area is the ventricular myocardium followed by atrial walls, cardiac valves, and pericardium.3 Pericardial manifestation can cause acute, recurrent, or constrictive pericarditis.3 American Thoracic Society (ATS) recommends cardiac MRI and cPET as the imaging modalities of choice for diagnosis based on the patient candidacy.4

Patients with cardiac sarcoidosis usually present with arrhythmias, conduction abnormalities or cardiomyopathy which were not evident in our patient indicating low probability of cardiac tissue involvement.4 It is also interesting to report the role of advanced cardiac imaging with CMR and cPET in challenging cases as ours. Also, it can be hypothesized that these can play an important role in the long-term management of RP.