Granulomas Inside and Outside the Heart: A Case of Myocardial and Pericardial Sarcoidosis

A 52-year-old man with a past medical history of severe aortic regurgitation status post a bioprosthetic aortic valve replacement 2 years prior and heart failure with reduced ejection fraction who presents with chest pain.

He presented to the emergency department where he complained of sharp chest pain that radiated to his neck and back. He underwent a transthoracic echocardiogram (TTE) which showed an ejection fraction (EF) of 40%, improved from 25% at the time of his aortic valve surgery, and a new, moderate pericardial effusion. He was diagnosed with acute pericarditis and discharged on prednisone.

He presented several months later with recurrent chest pain along with a 25 pound weight gain and dyspnea on exertion. He underwent a repeat TTE which showed an EF of 35% with anterior septum akinesis and basal inferoseptal, mid inferoseptal, and inferior hypokinesis. He was noted to have a mildly thickened pericardium, but no evidence of constriction. Left heart catheterization was notable for non-obstructive coronary artery disease.

During this hospitalization, he also underwent non-contrasted computed tomography (CT) of his chest which was significant for hilar and mediastinal lymphadenopathy. He subsequently underwent cardiac magnetic resonance imaging (CMR) which showed thickening and delayed enhancement of the pericardium along the free wall of the right ventricle and the distal anterior wall concerning for pericardial inflammation (Figures 1 and 2). The study was also notable for severe hypokinesis of the entire basal and mid-septum with delayed enhancement of the entire basal septum, not consistent with an ischemic pattern. His findings raised the concern for perimyocarditis and sarcoidosis. 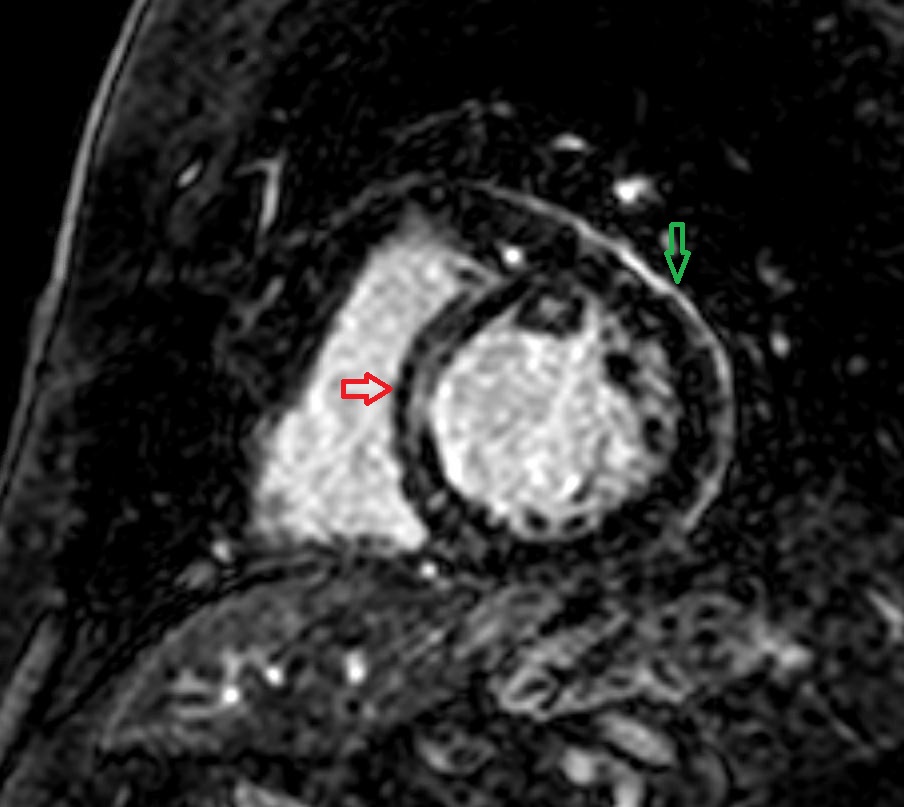 At this time, he also underwent positron emission tomography (PET) of the heart which showed areas of enhanced fluorodeoxyglucose (FDG) uptake in the basal anteroseptal and basal inferolateral myocardial segments.

Based on the results of his CT chest, CMR, and PET scan, he was diagnosed with both cardiac and pericardial sarcoidosis. The recurrent pericarditis was treated with prednisone, ibuprofen, and colchicine. He was started on goal-directed medical therapy for heart failure and underwent placement of an implantable cardioverter-defibrillator. He unfortunately has had many subsequent episodes of recurrent pericarditis with tapering of his glucocorticoids and non-steroidal anti-inflammatory medications (NSAIDS) and has been unable to come off of these medications. Despite medical therapy, his heart failure has progressed to stage D and is undergoing evaluation for advanced therapies.

Which of the following is true of cardiac sarcoidosis?

The correct answer is: D. Asymptomatic pericardial effusion is the most common manifestation of pericardial sarcoidosis.

Cardiac sarcoidosis affects approximately 5% of patients with sarcoidosis yet is responsible for up to 85% of the mortality.1 Cardiac sarcoidosis is a very challenging diagnosis because endomyocardial biopsy, the gold standard, has low sensitivity of 25%. For this reason, the importance of multimodality imaging with echocardiography, PET-CT, and CMR has increased.2

Cardiac sarcoidosis typically presents with myocardial or electrical dysfunction and rarely causes clinically manifest pericardial disease with asymptomatic pericardial effusions as the most common manifestation of pericardial sarcoid.5 Case reports exist of other rare manifestations of pericardial involvement such as acute pericarditis, constrictive-effusive pericarditis, and cardiac tamponade.5-7 This case describes a very rare combination of clinically significant myocardial dysfunction along with recurrent pericarditis. CMR is the most comprehensive modality for assessing the pericardium, allowing for both morphologic characterization of the pericardium as well as the assessment of hemodynamic parameters. Pericardial inflammation results in increased and delayed enhancement of gadolinium within the pericardium. Serial CMR has proven to be a more reliably guide treatment for recurrent pericarditis than traditional inflammatory biomarkers.8

YOU ARE HERE: Home > Education and Meetings > Granulomas Inside and Outside the Heart: A Case of Myocardial and Pericardial Sarcoidosis