Why Do I Keep Having Chest Pain?

A 46-year-old gentleman with a past medical history significant for hypertension, hyperlipidemia, type 2 diabetes mellitus and obesity presented to an outside hospital emergency department (ED) with chief complaints of sharp, episodic, 6/10 chest pain with no radiation and no exacerbating/relieving factors. He also endorsed that he had experienced flu-like symptoms 8 days ago that resolved in 3 days after taking over the counter anti-allergic medications. ED workup showed atrial fibrillation on his electrocardiogram (ECG). He was started on flecainide and rivaroxaban by an outpatient electrophysiologist. He presented to the ED again, 1week later, with worsening chest discomfort. He underwent an exercise stress test that could not be completed due to patient fatigue. A subsequent left heart catheterization did not show any significant occlusion. He continued to have episodes of chest pain and volume overload for which he was admitted to our hospital. Pulsed-wave Doppler spectrum of mitral inflow velocities on admission showed significant respiratory variation of peak E-wave velocity (26%) (Figure 1). 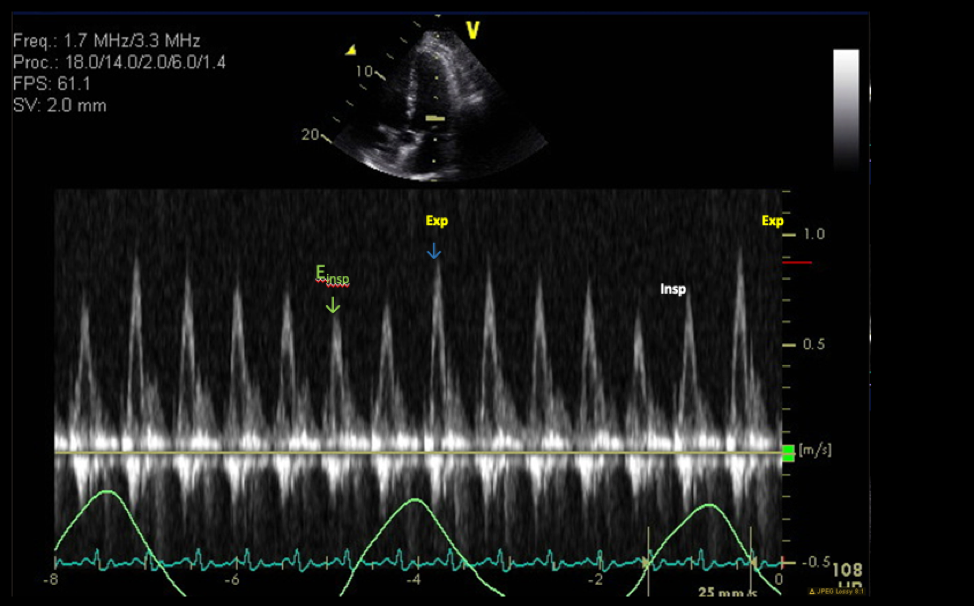 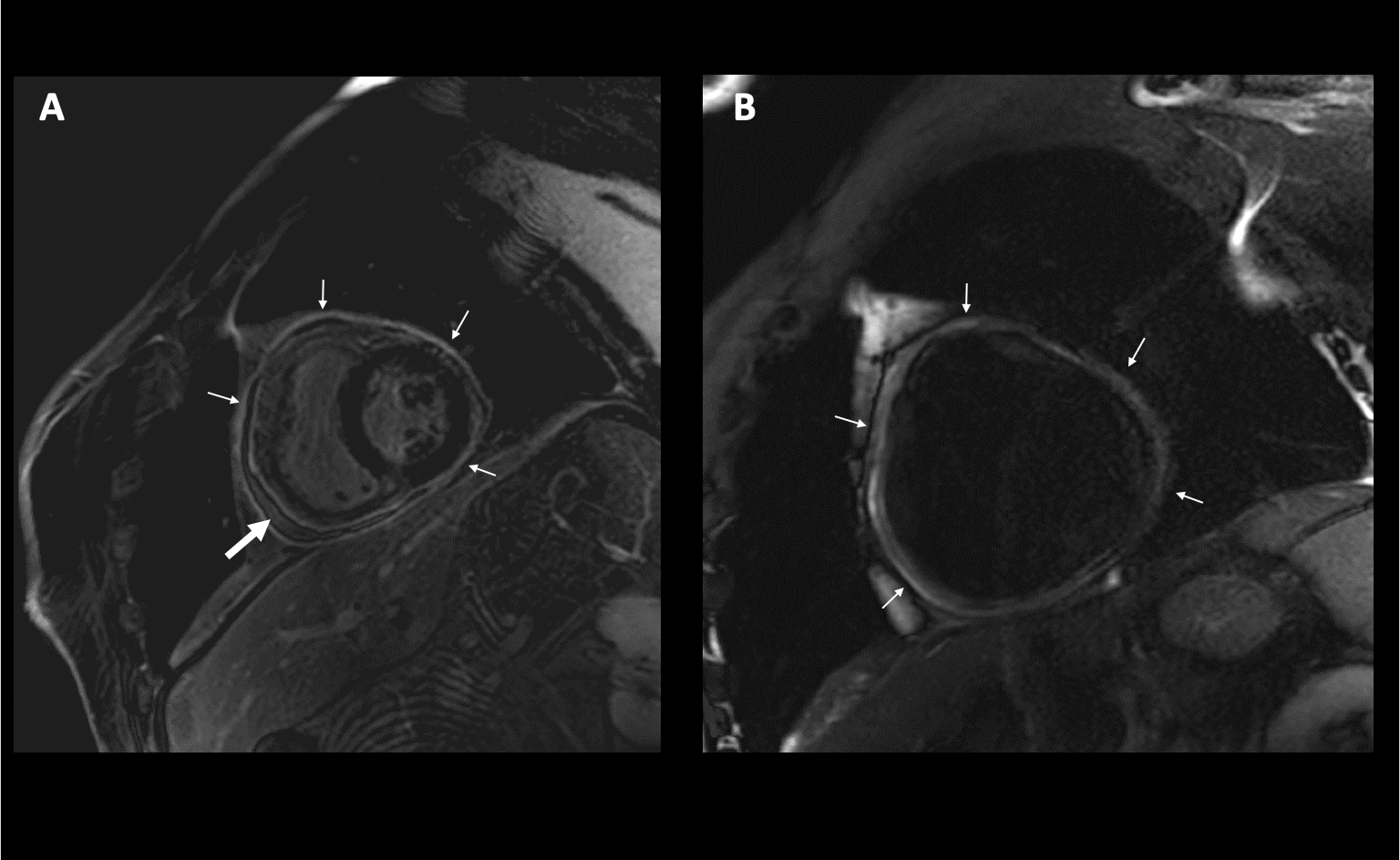 Pericardial fluid analysis was negative for infectious or malignant causes of effusion. His inflammatory markers including ESR and high-sensitivity CRP were markedly elevated at 32 mm/hr and 4.5 mg/L respectively. He was diagnosed with effusive constrictive inflammatory pericarditis and started on treatment with dual-anti-inflammatory therapy with ibuprofen 800 mg three times a day and colchicine 0.6 mg once a day (he experienced significant gastrointestinal discomfort on colchicine twice daily) as well as diuresis with Furosemide 40mg once day. His symptoms improved and he was discharged with instructions for periodic outpatient follow-up. As an outpatient, his symptoms of volume overload (bilateral pitting edema and abdominal ascites) remained well controlled with diuresis. Serial evaluation with fat-pad suppressed CMR showed improvement in constrictive physiology and he was tapered off all anti-inflammatory agents over the course of a year. However, he represented to the clinic with complaints of episodic chest discomfort. CMR findings showed reappearance of pericardial thickening, inflammation, and diastolic septal bounce consistent with constrictive physiology (Figure 3). He was re-initiated on anti-inflammatory therapy including anakinra. His symptoms remained well controlled on subsequent follow-up. 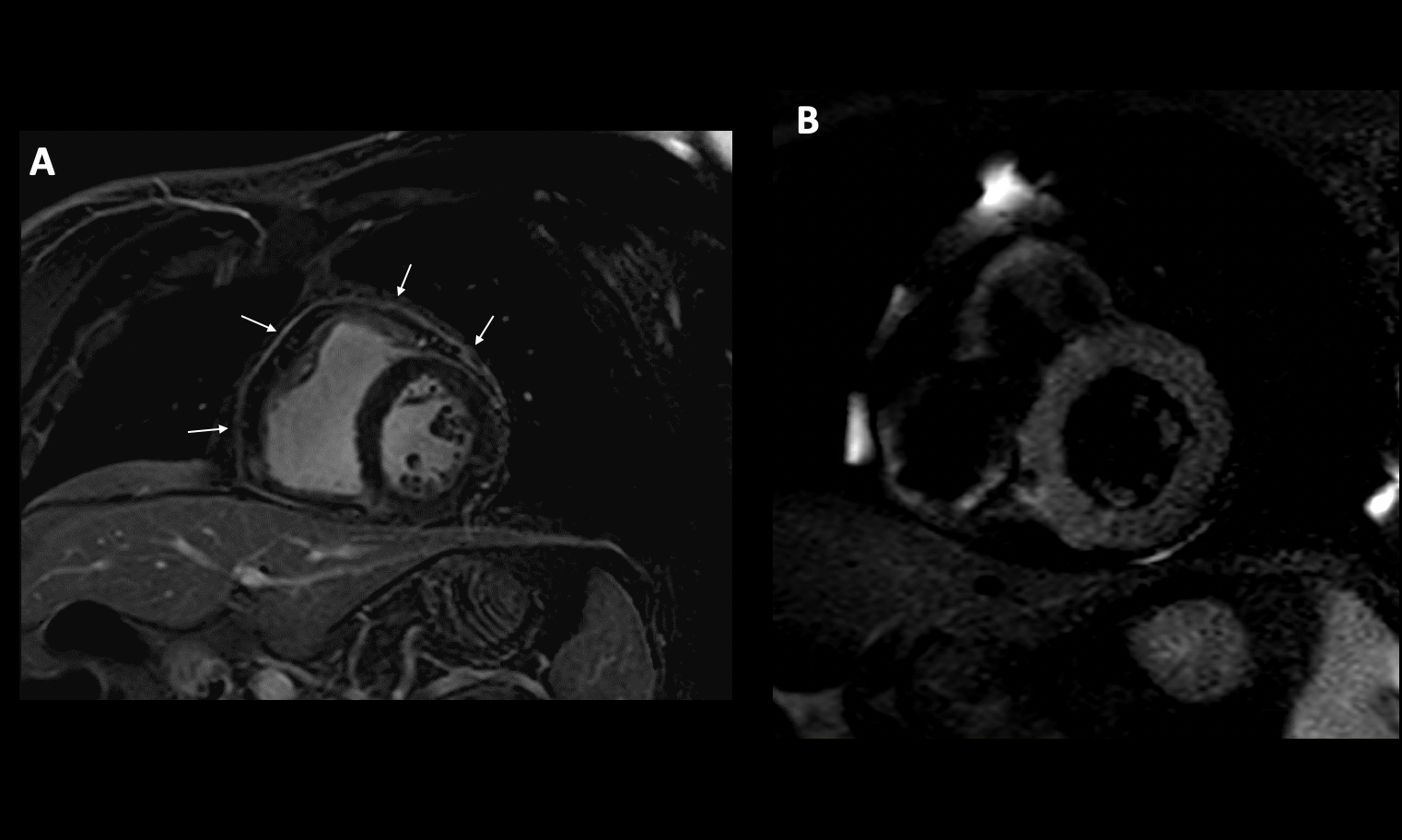 Which one of the following statements is true in this case?

The correct answer is: E. Colchicine is useful for the treatment of acute pericarditis as well as preventing recurrence.

Colchicine at low, weight-adjusted doses (0.6 mg once in <70kg and twice a day in >70kg) in addition to high dose nonsteroidal anti-inflammatory drugs (NSAIDs) in higher doses, i.e., ibuprofen (400-800 mg three times a day) or indomethacin (25-50 mg three times a day) or ASA 650 mg po TID have been shown to improve symptoms of chest pain in patients of acute pericarditis, as well as decrease recurrent episodes.1,2 Colchicine should also be the last drug to be tapered in patients with pericarditis on multiple agents once symptoms have resolved and inflammatory markers (CRP and ESR) have been normal. Studies have shown that approximately 15-30% of patients with idiopathic acute pericarditis who are not treated with colchicine will develop either recurrent or incessant disease, while colchicine may halve the recurrence rate.3,4

A. Recurrent pericarditis is a difficult condition to treat with limited therapeutic options. However, recently, novel biological agents such as rilonacept (an interleukin 1-α and 1-β inhibitor) has been developed and trialed in patients with at least one recurrence episode. Rilonacept was found superior to placebo in reducing time to recurrence in a randomized trial population of 61 participants (RHAPSODY trial). Although it has not been approved by the US Food and Drug Administration (FDA) for commercial use, it is a promising new agent for the treatment of recurrent pericarditis.5,6

B. Glucocorticoids are effective in suppressing inflammation in acute pericarditis; however, they are associated with a higher side effect profile as well as an increased risk of pericarditis recurrence. Low dose corticosteroids ( 0.5 mg /kg) prednisone 40 mg should be given for 2-4 weeks with a slow taper following that, decreasing dose by 5mg every week. Biologics, i.e., interleukin-1 (IL-1) inhibitors such as anakinra, rilonacept, and canakinumab are emerging as treatment for pericarditis. However, IL-1 inhibitors are FDA approved for rheumatoid arthritis but not pericarditis and are being used off-label. Recent clinical trials suggest that using anakinra help reduce recurrences in patients with colchicine resistant and corticosteroid dependent pericarditis.7

C. Pericardiectomy is used after exhausting all lines of medical treatment including steroids and biologics, i.e., anakinra, rilonacept, as a last resort treatment in patients with debilitating disease. Studies have shown that most patients with constrictive pericarditis can be managed symptomatically with anti-inflammatory therapy, volume restriction and diuresis, with periodic outpatient follow-up. Pericardiectomy is associated with symptomatic improvement and reduced recurrence of pericarditis, however, it must be done in high-volume centers to minimize the risk of complications. Attempting to reduce active inflammation with maximal medical therapy should be attempted before surgery.8

YOU ARE HERE: Home > Education and Meetings > Why Do I Keep Having Chest Pain?