A 29-year-old, previously healthy Caucasian male presented to the emergency department with progressively worsening dyspnea on exertion over the last month period. About 2 weeks prior to presentation, his shortness of breath began to worsen and was brought on even with minimal exertion. He also reported associated symptoms of testicular swelling and abdominal discomfort with severe fatigue, night sweats, fevers, and chills. He denied symptoms of weight loss, chest pain, palpitations, cough, nausea, vomiting, or blood in his stools. Family history was notable for a paternal uncle who had testicular cancer. He was a pack-per-day smoker for 10 years prior to presentation, and he otherwise denied illicit substance or alcohol use. Upon initial presentation, he was hemodynamically stable, however, he was tachypneic on room air. Physical examination was notable for an elevated jugular venous pressure, a firm right testicular swelling and mild abdominal distension with no abdominal tenderness to palpation. He did not have any abnormal heart sounds or lower extremity edema, and lungs were clear to auscultation. Admission electrocardiogram (ECG) was notable for a new complete right bundle branch block. A computed tomography (CT) scan of the abdomen and pelvis showed a heterogeneous liver with small volume ascites and inguinal lymphadenopathy. Subsequent chest CT with contrast showed diffuse lung nodules bilaterally and a right ventricular mass. An echocardiogram showed a left ventricular ejection fraction of 56% with a severely dilated right ventricle (RV) and a 7.4 x 6.0 cm mass infiltrating and obstructing the RV (Figure 1), along with, moderate pericardial effusion and patent foramen ovale. A cardiac magnetic resonance imaging (MRI) re-demonstrated the heterogeneous RV mass (Figure 2). Subsequent testicular ultrasound showed a right testicular mass measuring 1.5 cm in diameter. MRI of the brain showed no evidence of metastasis. Upon admission, he was hemodynamically stable, albeit tachycardic, but within a day he became hypotensive with a rising lactate and liver enzymes concerning for cardiogenic shock. He was intubated and placed on VA-ECMO. During his hospital stay, endomyocardial biopsy of the RV mass showed findings consistent with a metastatic embryonal germ cell tumor. Oncology initiated chemotherapy with cisplatin, etoposide, and bleomycin, subsequently. Cardiothoracic surgery was consulted, however, determined the mass was not resectable. 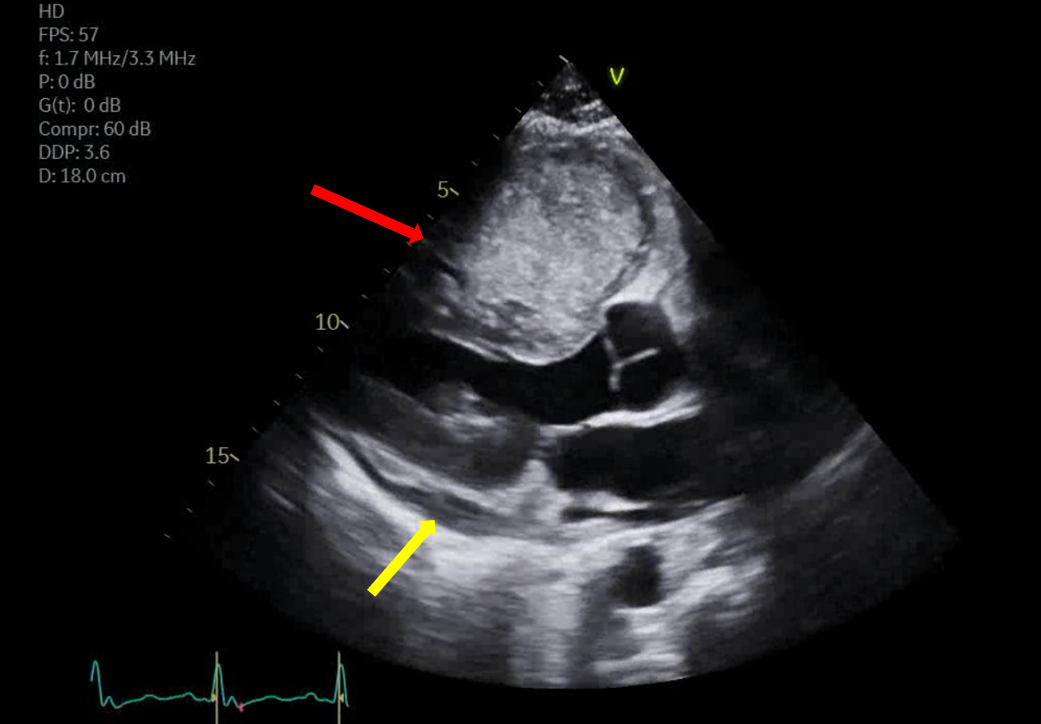 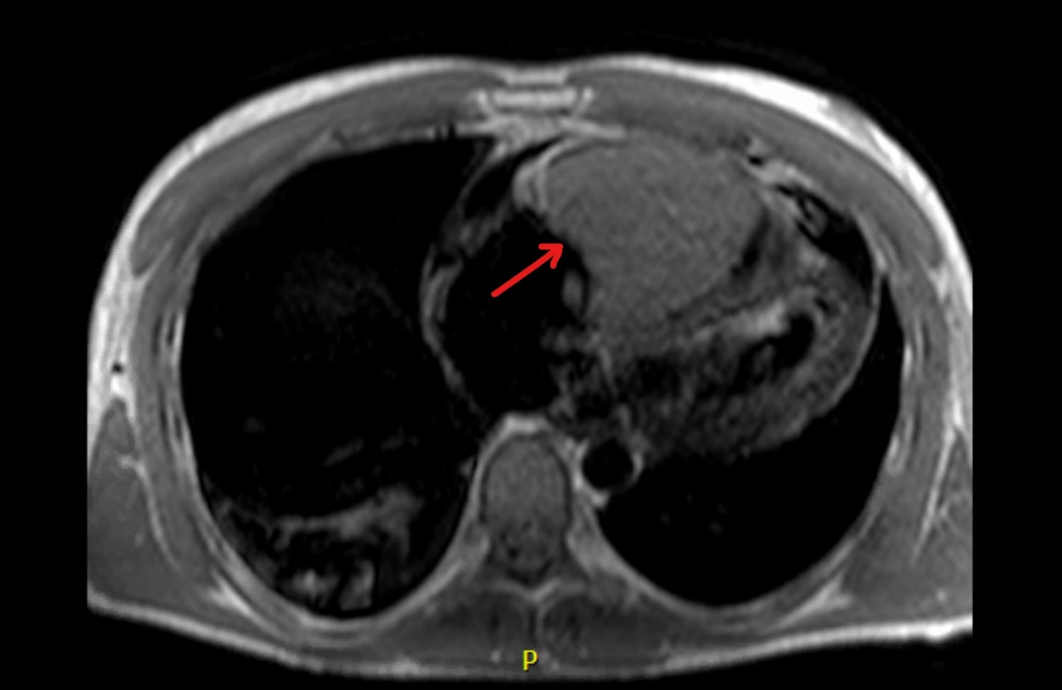 What is the best imaging modality to evaluate malignant potential in a newly discovered cardiac mass?

Imaging is necessary in the detection and diagnosis of cardiac metastasis as there are no specific or pathognomonic clinical signs. In the setting of new cardiac symptoms, chest radiography can be performed initially. Radiography usually yields non-specific findings such as pleural effusions, pericardial effusions, or abnormalities in the cardiac silhouette.1 However, transthoracic echocardiography is the best first-line imaging modality and can assess for a wide array of cardiac diseases. Its advantages include low cost, wide availability, and ability to assess valvular function and intracardiac flow.2 Echocardiography has good diagnostic accuracy in detecting the presence of a mass and characterizing its size, location, and mobility.1,2 Despite its numerous benefits, echocardiography does have inherent drawbacks including limited field of view, operator variability, and limited visualization of the heart apex and base.1,2 In addition, it is difficult to evaluate whether a cardiac mass is benign or malignant on echocardiography due to poor tissue characterization.3,4

Cardiac CT can be performed as second line imaging as it provides a large field of view and optimal spatial resolution to evaluate any mediastinal lymph nodes or calcifications secondary to metastasis.1,2 Thus, cardiac metastasis with any extracardiac involvement can further be evaluated with cardiac CT. Furthermore, cardiac CT provides excellent anatomical visualization, including coronary arteries with coronary CT angiography, which can aid in planning for surgical resection.1,2 Although cardiac CT is an excellent modality for anatomical visualization, it is limited in its ability to characterize soft tissue especially if there an infiltrating mass, thus necessitating cardiac MRI.1,2

Cardiac MRI is regarded as the best imaging modality to evaluate cardiac masses, as it provides excellent soft tissue characterization, evaluation of myocardial involvement, and better anatomical visualization than cardiac CT.1-5 With the addition of gadolinium contrast, cardiac MRI can also better characterize masses based on vascular supply.4,5 Thus, further characterization of masses on cardiac MRI can determine whether a mass is malignant or benign, providing great diagnostic value in the workup of a cardiac mass.2,3 Along with the aforementioned imaging modalities, fluorine-18-fluorodeoxyglucose positron emission tomography (FDG-PET)/CT can be used for localization of metastasis and can also be done serially to monitor response to the treatment. However, false positive results are a limitation due to increased FDG uptake due to inflammation in some cases.6

YOU ARE HERE: Home > Education and Meetings > Cardiac Metastasis in Testicular Tumor: An Imaging Challenge