The patient states that she has noticed a slow worsening of her bilateral lower extremity claudication for the past 3 years. She was previously able to walk 1-2 blocks with pain in her calves, but now she has pain that has progressed proximally to her thighs and occurs after only ½ block. She is forced to rest for about 10 minutes before the pain subsides; the patient has no pain at rest. She also endorses numbness in her feet at night but improve in a dependent position. The patient is a 12 pack-year smoker but quit 2 years ago. She denies alcohol and illicit drug use. Family history is significant with a mother who died of sudden cardiac death at 54, and a father who died swimming at 23. Her outpatient medications are buspirone 7.5mg twice a day, gabapentin 300mg twice a day, and sertraline 50mg daily. 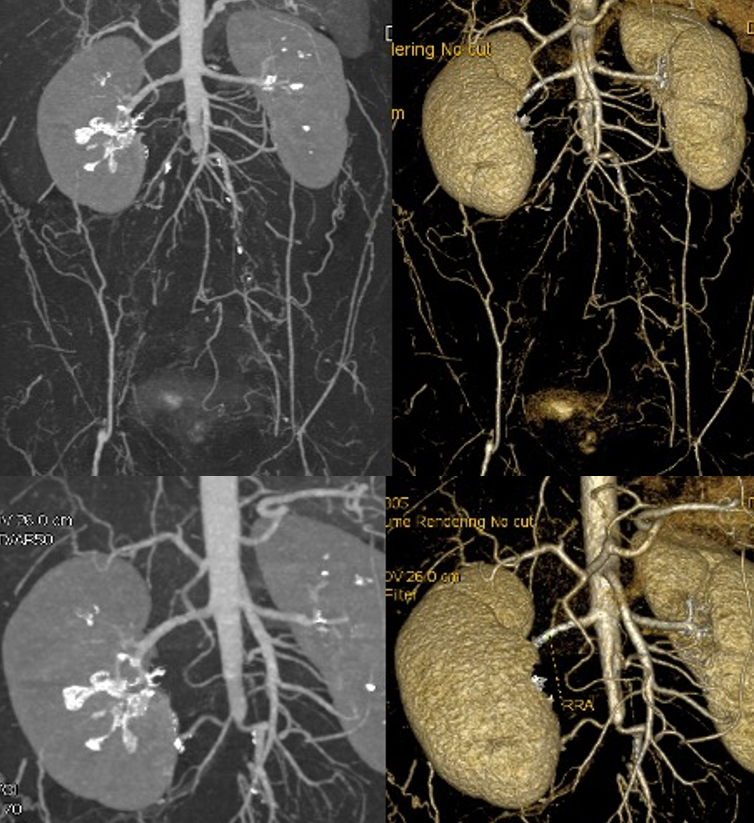 Based on these findings, what is the next best step in the treatment of this patient?

The correct answer is: A. Conservative therapy with aspirin, statin, cilostazol, and structured exercise program

This patient's claudication symptoms are from her significant peripheral arterial disease (PAD). The estimated prevalence of PAD is 200 million people worldwide with a total annual cost of hospitalization in the United States (US) estimated to be >$21 billion.1 Broadly, PAD refers to pathology in non-cardiac and non-cerebral arteries. The most common cause of PAD is atherosclerosis, and thus the strongest risk factors are smoking, diabetes mellitus, hyperlipidemia, and hypertension.1 Other etiologies of PAD include inflammatory disorders such as vasculitis and other arteriopathies such as fibromuscular dysplasia. More than half of the patients with PAD have comorbid conditions including coronary artery disease, cerebrovascular disease, or both.1 An ABI of 0.9 or less is associated with twice the mortality of an ABI of 1.11 to 1.40.1

A majority of patients with PAD are asymptomatic which contributes to why PAD is underdiagnosed and undertreated.2 Symptomatic patients complain of fatigue, discomfort, cramping, or pain when the affected muscles groups are exerted.2 This commonly presents as lower extremity pain when walking but relieved at rest. For treatment and prognosis, it is important to differentiate patients with claudication versus critical limb ischemia or acute limb ischemia. Providers should have high clinical suspicion for critical limb ischemia in patients who have pain at rest or ulceration on examination.

Both US and European guidelines agree that ABI should be the first study used in the diagnosis of PAD.3 Toe-brachial index (TBI) is the next best step in patients who have non-compressible arteries because that can artificially elevate the ABI. An ABI <0.9 or a TBI <0.7 is diagnostic of PAD.2 Both US and European guidelines recommend against screening asymptomatic patients, and they also recommend against duplex ultrasound, computed tomography angiography, magnetic resonance angiography, or catheter-based angiography in initial diagnosis.3 However, these can be considered to diagnose anatomic location and severity of stenosis for patients with symptomatic PAD who are being considered for revascularization.2

The three main goals for treating patients with PAD are to reduce cardiovascular outcomes, increase functional capacity, and prevent limb ischemia.1 In terms of treatment, both the US and European guidelines address targeting risk factors for atherosclerotic disease.3 They both issue Class I recommendations for smoking cessation, tight glycemic control, statin therapy and strict blood pressure management.3

In addition to controlling risk factors, first line treatment for PAD includes antiplatelet therapy, structured exercise therapy, and cilostazol.2 In terms of antiplatelet agent, patients should be started on aspirin (75-325mg daily) or clopidogrel (75mg daily), although the latter has been found to be slightly more effective in reducing a composite outcome of ischemic stroke, myocardial infarction, or death from vascular causes.4 Ticagrelor was not shown to be superior to clopidogrel for the reduction of cardiovascular events, and had similar rates of major bleeding.5 The effectiveness of dual antiplatelet therapy with aspirin and clopidogrel in reducing cardiovascular events has not been well established.2 A structured exercise program includes walking at least three times a week for 30-60 minutes for at least 12 weeks.2 This is aimed at helping improve patients' functional capacity. Finally, cilostazol is a phosphodiesterase inhibitor which has been proven to increase walking distance on a treadmill by 25% compared to placebo.1

In this patient, treatment should first be started with goal-directed medical therapy (GDMT) including a statin, aspirin, structured exercise program, and cilostazol. She has no signs or symptoms concerning for critical limb ischemia or acute limb ischemia.

(Answer C - Therapeutic anticoagulation with a direct oral anticoagulant (DOAC))
The most recent guidelines published by the ACC/AHA in 2016 recommend against the use of anticoagulation in patients with PAD.2 This was a Class III: Harm recommendation. In the WAVE (Warfarin Antiplatelet Vascular Evaluation) trial, there was no difference in cardiovascular ischemic events in patients with antiplatelet therapy and anticoagulation versus antiplatelet therapy alone.2 There was an increased bleeding risk in the former group.2 However, more recent trials such as COMPASS (Cardiovascular Outcomes for People Using Anticoagulation Strategies) and VOYAGER PAD (Vascular Outcomes Study of ASA [acetylsalicylic acid] Along with Rivaroxaban in Endovascular or Surgical Limb Revascularization for PAD) have demonstrated benefit of low dose rivaroxaban (2.5mg twice daily) in addition to aspirin in reducing major adverse cardiovascular events and adverse limb events.6,7 However, the addition of rivaroxaban did increase the risk of major bleeding by 1%. This therapy has not been approved by the US Food and Drug Administration.6

(Answer E - Empiric therapy with pentoxifylline)
The most recent guidelines published by the ACC/AHA in 2016 recommend against the use of pentoxifylline in patients with PAD.2 This was a Class III: No Benefit recommendation. Pentoxifylline's mechanism of action is to decrease blood viscosity by increasing red blood cell membrane flexibility.8 Although pentoxifylline is generally well tolerated, it did not show benefit over placebo in the primary endpoint of maximal walking distance.2

YOU ARE HERE: Home > Education and Meetings > Young Woman with Exertional Leg Pain