Incidentalitis: When an Abdominal CT Reveals More than its Indication

A 57-year-old female with no significant past medical history consulted the emergency room (ER) for a 3-day history of headache, nausea, and bilious vomiting. The headache was partially relieved by nonsteroidal anti-inflammatory drugs (NSAIDs) and rest and had no associated neurological symptoms. She later started to experience intermittent chest tightness at rest which prompted her to go to the ER. Upon arrival, she denied any pleuritic or positional characteristics to her chest pain. She also denied any dyspnea or infectious symptoms. She had no regular medication and her vaccination status is up to date.

On arrival, she was found to be in sinus tachycardia (heart rate of 107 beats per minute), febrile (temperature 100.4°F) with a transient episode of hypotension, which improved with intravenous fluids.

On physical examination, cardiopulmonary exam was unremarkable (no pericardial friction rub). Jugular venous pressure (JVP) was initially low. A mild right upper quadrant and epigastric tenderness were noted on deep palpation. The electrocardiogram (ECG) was unremarkable except for the sinus tachycardia (Figure 1).

Serologic panel for hepatitis, mononucleosis and toxicologic screening came back negative after a few days, except for the hepatitis B positive immunity due to prior vaccination.

In order to further investigate the abnormal liver tests and epigastric discomfort, an
abdominal computed tomography (CT) (with contrast administration) was performed and raised concern about hepatitis or liver congestion related to cardiac disease. In addition, a mild enhancement of the nondilated common biliary duct (CBD) was described, which was worrisome for possible early-stage cholangitis. Interestingly, the late contrast images acquisition revealed a small pericardial effusion with thickened pericardium and pericardial enhancement suggestive of pericarditis (Figure 2-A).

In addition, a magnetic resonance cholangiopancreatography (MRCP) was performed for better definition of the liver and biliary tree anatomy. This exam showed hepatic edema with abnormal enhancement and prominent inferior vena cava (IVC), suggesting congestive hepatopathy, in addition to bilateral pleural effusions and generalized anasarca. Of note, there was a small volume rim-enhancing pericardial effusion again suggestive of acute pericarditis.

To investigate the concern for congestive hepatopathy, a transthoracic echocardiogram was performed and demonstrated minimal pericardial effusion (Figure 2-B). The interventricular septum was dyssynergic without any sign of ventricular interdependence. The IVC was plethoric with very little respiration variation (Figure 2-C).

The patient was initially started on broad-spectrum antibiotics, for the suspicion of cholangitis and sepsis, which were quickly changed to colchicine and NSAIDs in light of these investigations. Diuretics were also started to treat the anasarca. Upon discharge, the patient had a CRP of 1,9 mg/L (normal <5 mg/L) with minimal residual symptoms and a cardiac magnetic resonance imaging (MRI) was ordered as an outpatient.

The cardiac MRI subsequently showed a pericardial thickening up to 3 millimeters with enhancement compatible with sequelae of pericarditis (Figure 3D-E). Equivocal findings of constriction (septal dyssynergy and mildly dilated IVC) were noted, but not diagnostic for constrictive pericarditis, and there was no evidence of pericardial tethering of the myocardium. 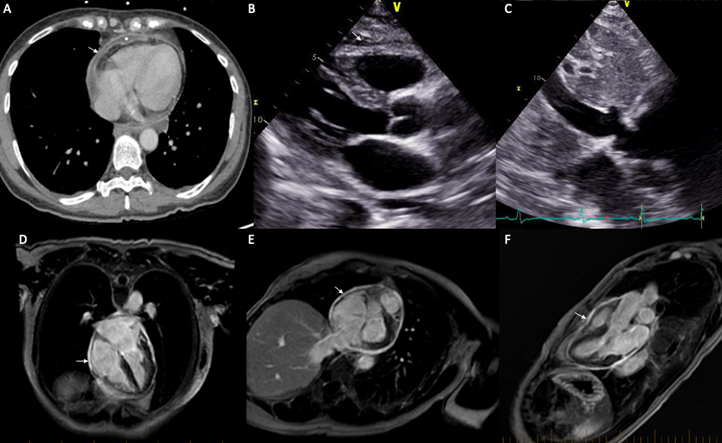 Given the initial presentation, what would be the mechanism for the patient's liver enzymes perturbation?

The correct answer is: B. Transient constrictive pericarditis

The patient presented initially with non-specific symptoms (nausea, bilious vomiting) likely related to her liver congestion. Her non-pleuritic and non-positional chest discomfort was very atypical for pericarditis. In fact, the small pericardial effusion seen on CT was the only positive criteria for the diagnosis of pericarditis given the atypical chest pain, the absence of pericardial rub and the normal ECG.

The patient's initial low JVP can be explained by the dehydration state from the nausea and vomiting, but once the patient's volume status was corrected, jugular venous distention was noted on physical examination.

Nowadays, due to its easy access, CT scan plays a central role in the initial evaluation of a patient with chest tightness presenting to the emergency room.6 Despite being a second-line imaging modality in the investigation of acute pericarditis,3 it is often the first imaging performed in an acute setting and can provide valuable information about an underlying pericardial condition. Beyond the identification of a pericardial effusion, the presence of attenuation may help differentiating a transudative effusion from an exudative or hemorrhagic process. Specifically, a pericardial effusion with an attenuation similar to water (less than 10 Hounsfield units [HU]) signs a transudative effusion, whereas an attenuation of 20 to 60 HU suggests an exudative process.2 In addition, a mediastinal mass or pericardial nodularity in a patient known for malignancy should raise the concern for a malignant pericardial effusion.7 Finally, pericardial enhancement after contrast administration can also highlight an underlying inflammatory process of the pericardium.

Unique to this case, the initial CT was performed to assess the liver and the gastrointestinal tract to find a cause for the liver enzymes perturbation. After the contrast injection, the delayed images acquisition provided enough time for the contrast to reach the pericardium which allowed us to appreciate the pericardial enhancement that would not have been seen otherwise.

Cardiac MRI has a central role in the evaluation for constriction since it offers a better anatomic description, assesses the degree of pericardial inflammation, and provides information about the hemodynamic impact of a pericardial effusion. It also informs the clinician about the disease course and represents a powerful tool to guide therapy. Specifically, the presence of increased pericardial signal in both late gadolinium enhancement (LGE) and edema weighted sequences (T2-weighted short-tau inversion recovery sequence) suggests an acute phase of inflammation while the presence of pericardial LGE without edema suggests a more subacute disease course. Finally, the absence of both suggests either burned out pericarditis or resolved pericarditis.

Ultimately, the clinician should always remember that a CT scan performed for other clinical indications can incidentally reveal important details about the pericardial anatomy and even some degree of characterization as seen in this case.

YOU ARE HERE: Home > Education and Meetings > Incidentalitis: When an Abdominal CT Reveals More than its Indication