Case of a Weeping Pericardium

A 26-year-old male, with no significant past medical history, consulted to a community-based hospital for a 4-week history of shortness of breath and anasarca. The progressive dyspnea (New York Heart Association classification III/IV) prompted him to go to his local emergency room. He denied any chest discomfort, infectious symptoms, or recent travel. Except for a selective serotonin reuptake inhibitor (SSRI), he was not taking any regular medication. He denied alcohol or illicit drugs use and his vaccination status was up to date.

A computed tomography (CT) with contrast administration was initially performed to investigate the dyspnea and revealed bilateral segmental pulmonary emboli with a mildly dilated main pulmonary artery (measured at 31 mm) and some indirect signs of right heart failure (reflux of contrast in the inferior vena cava (IVC) and presence of moderate ascites). In addition, a moderate circumferential pericardial effusion (measured at most 15-18 mm) and bilateral pleural effusions were noted.

A transthoracic echocardiogram (TTE) showed a reduced left ventricular ejection fraction (LVEF) at 40%, with some regional wall motion abnormalities, and a severely hypokinetic right ventricle (RV). A paradoxical septal motion was reported and the IVC was plethoric with very little respiratory variation. Surprisingly, the RV was not dilated, and the estimated PA pressure was normal (24 mmHg, with a right atrial pressure 15 mmHg). A small circumferential pericardial effusion (at most 10 mm) was noted, with no hemodynamic impact.

Considering these findings, the patient was started on anticoagulation for the pulmonary embolism, diuretics, and was transferred to our quaternary care center for the rest of the of the investigation.

On arrival to our institution, the patient was found to be in sinus tachycardia (heart rate of 110 beats per minute), hemodynamically stable and afebrile. His saturation was 96%, not requiring any oxygen therapy. Electrocardiogram showed low voltages and nonspecific ST changes (Figure 1). On physical examination, the cardiopulmonary exam revealed distant heart sounds (no pericardial friction rub), an elevated jugular venous pressure (JVP) and decreased air entry bilateral with dullness on percussion. The abdomen was distended from the ascites seen on previous CT. 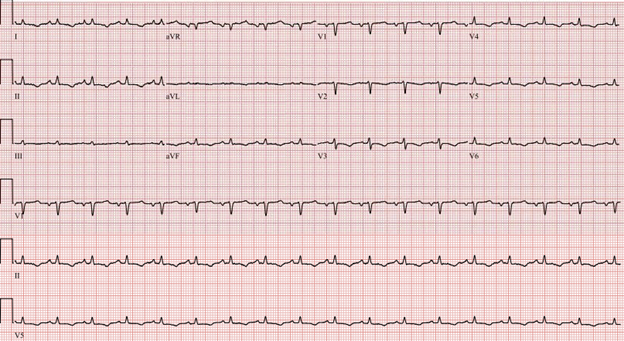 A cardiac magnetic resonance imaging (CMR) was subsequently performed and revealed an extensive pericardial effusion with constrictive physiology (inspiratory septal shift toward the LV). Both LV and RV systolic function were decreased (respectively 38% and 32%). Pericardial edema (on T2-weighted short-tau inversion recovery sequence) and circumferential pericardial enhancement on late gadolinium enhancement (LGE) images were both appreciated on this examination (Figure 2). 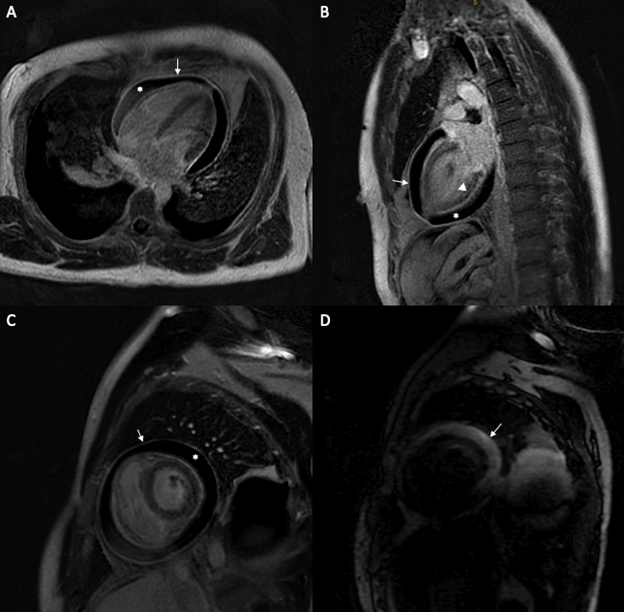 A repeat TTE, to assess specifically for constriction, showed a large circumferential effusion (measured at most 31.2 mm), a plethoric IVC, a tricuspid and mitral inflow respirophasic variation and a septal shift, all compatible with constrictive physiology (Figure 3). 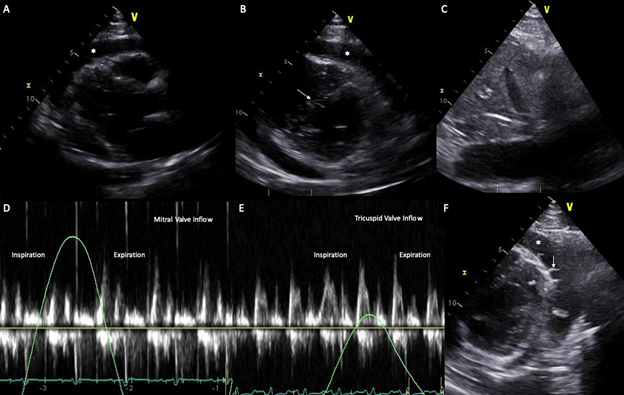 Considering these findings, the patient was started on prednisone (0.25 mg/kg/day) and colchicine and a pericardiocentesis under ultrasound guidance was performed. About 200 ml of serosanguinous pericardial fluid was retrieved and sent for analysis. Cytology showed mixed neutrophils, lymphocytes, and occasional macrophages (consistent with acute and chronic inflammation). Bacterial, fungal, tuberculosis cultures and viral PCR were all negative.

Post pericardial drainage, a right and left heart catheterization confirmed the diagnosis of constrictive pericarditis by demonstrating an equalization of the end-diastolic pressure between the right-sided and left-sided chambers. The typical prominent Y descent (W-sign) was also appreciated on the right atrial pressure curve.

The patient was discharged with a slow tapering of the corticosteroids as an outpatient and a 3-month course of colchicine. Despite the normalization of the inflammatory markers, the patient experienced persistent symptoms limiting his activities. After 1 month of treatment, a repeat CMR was performed and demonstrated persistent pericardial enhancement on LGE sequences and extensive pericardial adhesions on real-time cine images, with no recurrence of pericardial effusion (Figure 4). A repeat TTE was also performed and showed persistent signs of constriction such as septal shift and expiratory diastolic flow reversal in the hepatic vein (Figure 4). 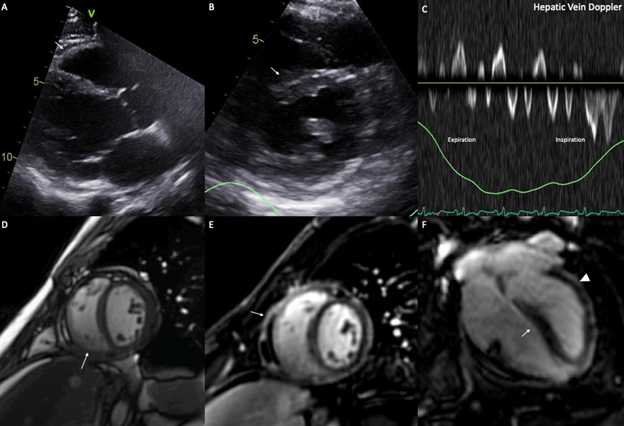 What would be the most likely diagnosis?

The correct answer is: B. Effusive-constrictive pericarditis

The patient presented initially with anasarca and increasing shortness of breath related to right-sided heart failure in the context of effusive-constrictive pericarditis (ECP). The findings of bilateral segmental pulmonary embolism on the initial CT could have misguided the clinician the initial treatment of the patient since these two conditions have similar clinical presentation.

Clinically, anasarca is not a classic sign of acute pulmonary embolism (PE). It signs more a chronic pulmonary embolism due to long-standing pulmonary hypertension, resulting in RV failure. In an acute setting, massive PE with acute RV failure results in hemodynamic instability which does not correspond to the patient presentation.1 The patient's initial echocardiography showed a biventricular failure with a normal pulmonary artery pressure which raised the suspicion for another underlying process. It remains unclear if an underlying pericardial inflammation could be a risk factor for PE. Some case reports suggest that constrictive pericarditis might be complicated with venous system or right atrial thrombus formation, but only a few cases were reported in the literature.2

ECP is characterized by the presence of a hemodynamically significant pericardial effusion in addition to a decreased pericardial compliance. The hallmark feature of ECP is the persistently elevated right atrial (RA) pressure (over 10 mm Hg, or failure to drop by 50% or more) post pericardiocentesis.3,4 Although frequently mistaken for the transition phase from an inflammatory effusion with associated tamponade to constrictive physiology post pericardiocentesis, these entities should be considered on a clinical spectrum.5,6 Initially the increased intra-pericardial pressure seen in tamponade cause impairment of the early diastolic filling. Once the pericardial pressures are relieved (by fluid drainage) the constrictive physiology prevails. Specifically, the early diastolic filling due to the increased filling pressure by the non-compliant pericardium emerges. As the pericardial reserve is exhausted in mid-to-late diastole, the ventricular filling is impaired, leading to a decreased cardiac output. These hemodynamic patterns are demonstrated by a prominent rapid ventricular filling wave and rapid rise in the mid-diastolic ventricular pressures seen with an intracardiac hemodynamic assessment (square root sign or dip-and-plateau).

Initially described by Sagrista-Sauleda7 as the coexistence of effusive and constrictive features, our understanding of the pathophysiology of ECP is still incomplete. Based on a case series, the prevalence of ECP among patients with pericardial effusion ranges from 1-2% to up than 50%. This range could be explained by the lack of criteria and the variation in modalities used to diagnose ECP (echocardiography vs. catheterization). Although, ECP seems to be much more prevalent in tuberculous pericarditis (up to 53% in a series of patients with tuberculous pericardial effusion),8 the vast majority of patients with ECP seen in North America are idiopathic, followed by radiation-induced heart disease.9 The optimal treatment of idiopathic ECP is still unclear. Therapeutic options include nonsteroidal agents and/or steroids. As recommended in pericarditis, non-steroidal agents are the first line in cases where mild constriction is present. High doses of steroid should be avoided. Data for adjuvant therapy with colchicine are lacking, but experts usually recommend its use unless contraindicated.

Back to our case, due to the lack of improvement despite the medical treatment and the CMR showing extensive pericardial adhesion and LGE, the patient was referred to the cardiac surgeon for a pericardiectomy.

YOU ARE HERE: Home > Education and Meetings > Case of a Weeping Pericardium