A 43-year-old male ultra-marathon runner presented to the emergency department (ED) with complaints of chest pain. Symptoms occurred one hour into a training run on the day of presentation. Past medical history was significant for hyperlipidemia treated with rosuvastatin 40 mg daily. The patient had a computed tomography coronary calcium score 1-year prior with an Agatston score of 167 Hounsfield units. Family history was significant for sudden cardiac death in an uncle around 40 years of age. On arrival to the ED, he was given sublingual nitroglycerin which provided symptom relief. Vital signs were stable. Cardiac auscultation was unremarkable other than a faint, 1/6 continuous murmur heard in the right and left upper sternal border. Laboratory results revealed an initial troponin T of 147 ng/L (normal ≤15 ng/L) which decreased 2 hours later to 132 ng/L. Complete blood counts and renal function were unremarkable. Electrocardiogram (ECG) revealed a first-degree AV block and an early repolarization pattern (Figure 1). Chest X-ray was unremarkable. 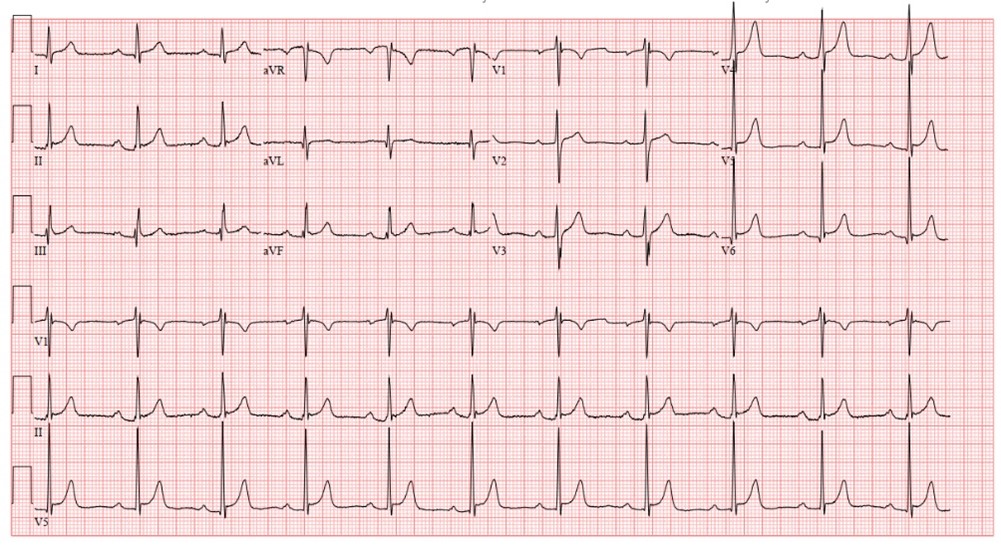 He was diagnosed with non-ST segment elevation myocardial infarction (NSTEMI) and the decision was made to proceed with coronary angiography.

Coronary angiography revealed balanced dominance with moderate, diffuse coronary artery atherosclerosis with the most significant stenosis involving the proximal left anterior descending (LAD) artery. The artery appeared 50% obstructed and the instantaneous wave-free ratio assessment of the lesion revealed a ratio of 0.96 (normal >0.9). There were likely two coronary artery fistulas (CAF) arising from the proximal LAD (Figure 2A) and conus branch of the right coronary artery (RCA) (Figure 2B) which emptied into the main pulmonary artery (PA). 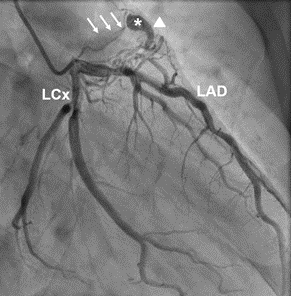 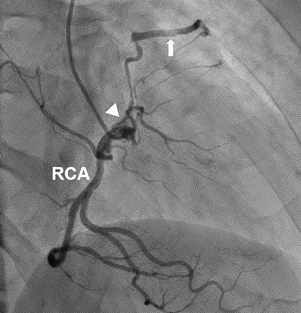 To further characterize CAF anatomy, a cardiac computed tomography angiogram (CTA) was obtained the following day. This revealed a ring like connection between the LAD and conus branch of the RCA which met to form a focal saccular aneurysm measuring 9 mm that fistulized to the main PA (Figure 3A-B). The PA caliber was in normal limits. Cardiac chamber size was normal. Agatston score was 186 Hounsfield units and left ventricular ejection fraction (LVEF) 70%. 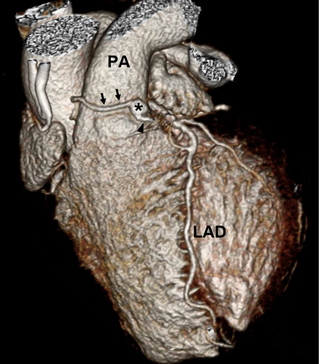 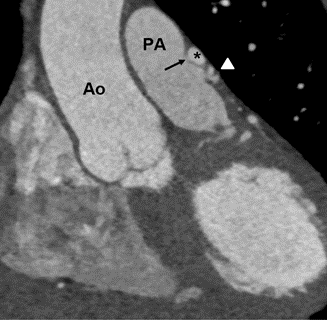 What is the next best step in this patient's management?

The correct answer is: C. Restrict sports participation and refer patient for repair of CAF.

This is a case of a symptomatic ultra-marathon runner found to have CAF from the LAD artery and the conus branch of the RCA which fed into the PA, better known as a Vieussens' arterial ring (VAR). VARs are thought to be a remnant of the embryonic conotruncal ring and were first described in 1706 by Raymond de Vieussens.1,2 The incidence of VARs in the population was initially reported around 48%.1 However, a recent study using CT angiography reports the incidence around 3.2%.3 VARs have the potential to develop pathological processes.4 In our patient's case, the VAR exhibited aneurysmal dilation at the joining of the coronary arteries where the fistula connected to the PA.

CAFs are classified as coronary anomalies and can arise from the right, left, or both coronary arteries and have an incidence of 0.87%.4-6 Most fistulas communicate with the right ventricle, right atrium or coronary sinus.5-7 Coronary fistulas to the pulmonary artery are less common and are usually found incidentally with cardiac imaging.6 Complications can arise from CAF with dilation of vessel caliber which can alter coronary flow distal to the fistula resulting in myocardial ischemia. This was the likely case of chest pain symptoms in our patient.6,8 Other complications from CAFs include pulmonary hypertension and congestive heart failure from left to right shunting, bacterial endocarditis and/or rupture, or thrombosis of the fistula or associated aneurysm.6

There are no specific guidelines regarding management of CAFs in the Eligibility and Disqualification Criteria for Athletes With Cardiovascular Abnormalities. However, the 4th Task Force addresses recommendations regarding coronary artery anomalies in athletes. Considering CAFs are a type of coronary anomaly, the authors feel these recommendations can be applied to management of CAFs. In the setting of chest pain and evidence of myocardial ischemia seen in our patient, we feel the most appropriate management strategy would mirror recommendations for coronary anomalies with ischemic potential. This would include anomalies involving the left main or LAD artery from the right sinus of Valsalva, which despite a relatively low incidence (0.15%), are most frequently implicated with sudden cardiac death (SCD) in athletes.9-12 Therefore, our recommendation would be to restrict participation before repair whether the anomaly was found incidentally or as a consequence of symptoms.11 This makes choice C the best answer and choice D incorrect.11

In the setting of increased myocardial oxygen demands while running, this patient's CAF had the potential to cause hemodynamic alterations to coronary flow resulting in a 'myocardial steal' phenomenon which is the likely explanation for this patient's symptoms. Similarly, anomalous left coronary arteries which pass between the aorta and PA are subject to compromised flow and put patients at a higher risk for ischemic events and SCD.9,10 Corrective interventions for CAFs remain controversial but include surgical repair or percutaneous coiling.13 Because no consensus exists, a heart team approach is recommended when deciding on the most appropriate intervention option.

Providing clearance to participate in only low-intensity class IA sports, answer choice A, would be reasonable if our patient had an anomalous left coronary artery arising from the PA since this type of coronary anomaly is less frequently observed in athletes who experience SCD (Class IIa recommendation, Level of Evidence C).11 Interestingly, these anomalies are usually identified early in childhood and present with ischemic signs and symptoms.11 Regardless of symptoms or evidence of ischemia, these patients should be referred for surgical repair (Class I, Level of Evidence B).13 Decisions regarding exercise restrictions after surgical repair can be made based on symptoms and ventricular function (Class IIa recommendation, Level of Evidence C).11

Answer choice B would be correct if this patient had an anomalous RCA from the left sinus of Valsalva.11 Although this is the most common coronary anomaly, it is far less prevalent in cases of SCD. Therefore, in the absence of symptoms or ischemic changes with exercise stress testing, it is reasonable to consider sports participation after adequate counseling while emphasizing the clinical uncertainty of a negative stress test (Class IIa recommendation, Level of Evidence C).11 Additional considerations may include the use of more sensitive and specific stress testing modalities with either invasive measurements (fractional flow reserve) or noninvasive imaging with myocardial perfusion imaging or stress echocardiography over stress ECG in this patient population to limit uncertainty.13

YOU ARE HERE: Home > Education and Meetings > A 43-Year-Old Ultramarathon Runner with Chest Pain