A Case of Autoimmune Pericarditis and its Management

This is a 30-year-old female who has a history of systemic lupus erythematosus (SLE) for 6 years. Two years ago, she was admitted to an outside hospital for shortness of breath where she was found to have bilateral pleural effusion (more on the left side) and underwent left sided thoracentesis. She was also experiencing central, non-radiating, pleuritic chest pain that worsened in supine position. There were no electrocardiogram changes, but physical examination revealed a pericardial friction rub. Westergren sedimentation rate (WSR) was 10 mm/hour (reference range: 0-20 mm/hour) and C-reactive protein (CRP) was 0.2 mg/dL (reference range: <0.9 mg/dL). An echocardiogram was performed which revealed trace pericardial effusion. Cardiac magnetic resonance (CMR) revealed mild focal increased pericardial signal intensity anterior/inferior to the right ventricle suggesting edema on T2 short tau inversion recovery (STIR) imaging (Figure A). Phase sensitive inversion recovery (PSIR) sequence after contrast administration showed mild circumferential late gadolinium enhancement (LGE) reflecting inflammation/fibrosis (Figure B). With the diagnosis of lupus induced acute pericarditis, she was started on ibuprofen 800 mg twice a day, colchicine 0.6 mg once a day (which she took only for 3 months) and tapering regimen of prednisone over 6 months which she was eventually switched to steroid sparing agents, mycophenolate mofetil (MMF) 1000 mg twice daily and hydroxychloroquine 200 mg once daily. Five months prior to presentation, she was treated with prednisone, which was tapered over 10 days, for lupus flare which manifested as severe diffuse arthralgias. Now, she presented to our clinic with worsening pleuritic chest pain which got relieved by leaning forward. She was hemodynamically stable. Physical examination reflected a pericardial friction rub. WSR was 15 mm/hour (reference range: 0-20 mm/hour) and (CRP) was 1 mg/dL (reference range: <0.9 mg/dL). Current medication included ibuprofen 800 mg once daily, MMF 1000 mg twice daily and hydroxychloroquine 200 mg once daily. CMR was obtained which revealed moderate circumferential pericardial increased signal on T2 STIR imaging (Figure C). PSIR sequence after contrast administration showed moderate circumferential LGE suggestive of active pericardial inflammation (Figure D). There was slight interval worsening noted as compared to the previous study (Figure A and B).

What is the next best step of management?

The correct answer is: C. Step up to quadruple therapy with ibuprofen, colchicine, prednisone and anakinra.

Systemic lupus erythematous (SLE) is an autoimmune disorder which results in inflammation of multi-organ systems medicated by immune complexes. Cardiac involvement is seen in 50% of SLE patients and acute pericarditis is the most common manifestation.1 Pericardial involvement is witnessed more during SLE onset or relapses.2 Pericardial effusion is seen in some patients and although rare, complications like cardiac tamponade and constrictive pericarditis can also be witnessed.2 The signs and symptoms of SLE induced pericarditis are diagnosed as any other pericarditis in general. It should meet two out of the following four criteria as per the 2015 European Society of Cardiology (ESC) guidelines – pleuritic chest pain which gets better on leaning forward, diffuse ST segment elevation or PR depression in acute phase on electrocardiogram (ECG), pericardial friction rub, and new or worsening pericardial effusion.3 Multi-modality imaging plays an integral part in diagnosing pericardial diseases. Echocardiography (ECHO) is the first line imaging as it correctly identifies pericardial effusion with or without tamponade and increased pericardial brightness.4 CMR is another important modality to look for early and LGE which denotes an ongoing inflammation. It also provides detailed information on constrictive physiology.4

2015 ESC guidelines recommend treating the underlying auto immune condition in patients presenting with pericarditis.3 MMF is one such steroid sparing immunosuppressive agent which inhibits B and T lymphocyte proliferation, thereby reducing antibody production in the body. As per an observational study conducted by Tselios et al., MMF showed a good activity for lupus disease control with a significant reduction in corticosteroid doses.5 Our patient was treated with MMF along with hydroxychloroquine for SLE with successful elimination of prednisone from the treatment regimen. Management of pericarditis usually involves non-steroidal anti-inflammatory (NSAID) drugs and colchicine. Corticosteroid can be added as second line therapy if clinical response is not seen with NSAID and colchicine or there is any contraindication to them. In addition to increased risk of recurrence, corticosteroids carry a risk of drug dependence resulting in established side effects and supporting the chronic evolution of disease process.3 Alternative steroid sparing agents like anakinra, intravenous immunoglobulin (IVIG) or azathioprine are used if there is failure of triple therapy. They can also be considered in case of corticosteroid-dependent and colchicine-resistant recurrent pericarditis as reflected in the study conducted by Finetti et al., where patients on anakinra showed complete response in few days with rapid withdrawal of accompanying treatment including corticosteroids.6 Side effects of anakinra include local injection site reactions and transient transaminitis.7 IVIG is expensive, demands hospitalization for infusion, and has a risk of recurrence of pericarditis on discontinuation.8 Azathioprine has a risk of serious infections, bone marrow suppression, liver injury and risk of development of lymphoma.9 Rilonacept is a new drug which has shown rapid reduction in recurrent pericarditis episodes and significantly reduced recurrence. It may be used as a steroid sparing monotherapy in recurrent pericarditis in those who were on corticosteroids as well as eliminates the need of initiation of steroids for patients who develop recurrence on colchicine.10 Pericardiectomy is considered as a last resort when there is failure to medical management.

Our patient was sub-optimally treated with high dose ibuprofen intermittently, tapering prednisone regimen and 3 months of colchicine with no improvement in pericardial symptoms. This resulted in recurrence of the pericarditis with worsening findings on CMR. Hence, after discussion with the patient, anakinra was considered. She was started on quadruple therapy of ibuprofen, colchicine, prednisone and anakinra for acute symptom control, long term reduction of recurrences and withdrawal of concomitant treatment while on anakinra. The timeline for the management is described below. 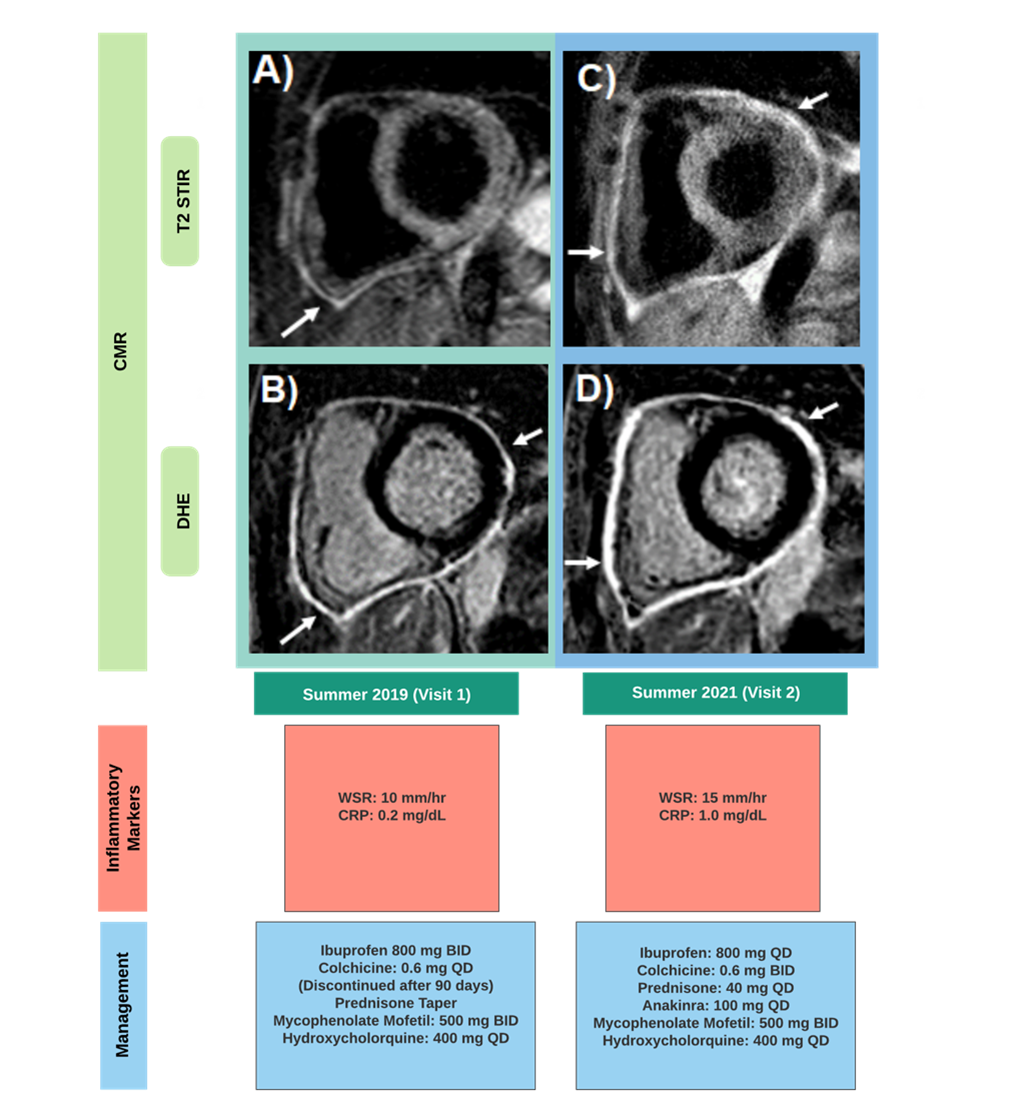 YOU ARE HERE: Home > Education and Meetings > A Case of Autoimmune Pericarditis and its Management