Cardiac Arrest in an 8-Year-Old

An 8-year-old previously healthy male was brought to the Emergency Department (ED) by Emergency Medical Services (EMS) after he collapsed at home. Parents reported that he was in the pool and looked unwell. As he got out of the pool and started running toward the house, he suddenly fell to the ground. His mother, a nursing student, noted that he was pulseless and started cardiopulmonary resuscitation (CPR). When EMS arrived, he was obtunded, but had palpable pulses. In the ambulance, he was initially bradycardic, then developed a wide-complex tachycardia. A blood pressure was difficult to obtain.

On arrival to the ED, the patient was initially moving spontaneously. He had 2+ radial pulses bilaterally. His mental status quickly declined as he again became obtunded. Pulse oximetry was difficult to obtain. He received 4 rounds of CPR for pulseless electrical activity with momentary return of pulses each time. A limited bedside echocardiogram revealed severely decreased left ventricular systolic function. His electrocardiogram (ECG) is seen in Image 1. 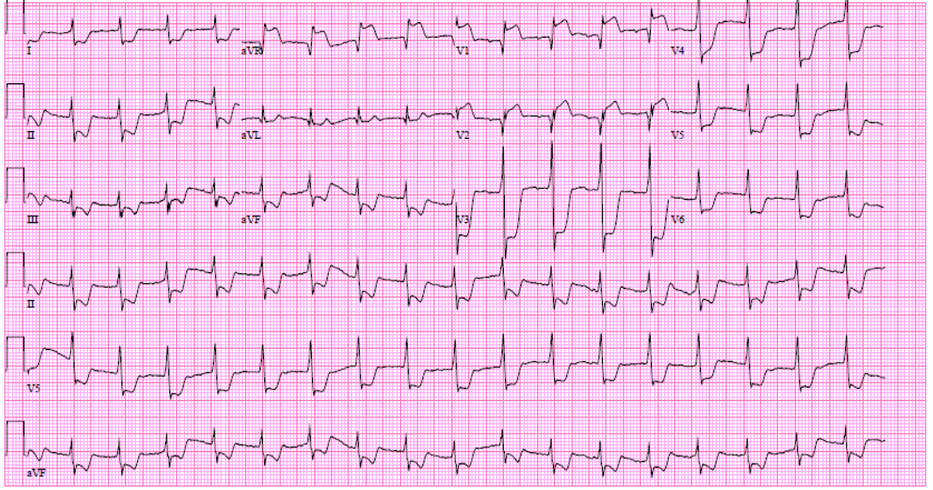 This patient was cannulated onto venoarterial extracorporeal membrane oxygenation (VA-ECMO) in the ED and transferred to the pediatric intensive care unit (PICU). Upon arrival to the PICU, he was found to be in ventricular fibrillation consistent with torsades de pointes (Image 2) and was successfully cardioverted to sinus rhythm.

Repeat ECG in the PICU while on VA-ECMO demonstrated resolution of ST changes and prolonged QTc of approximately 520msec (Image 3). 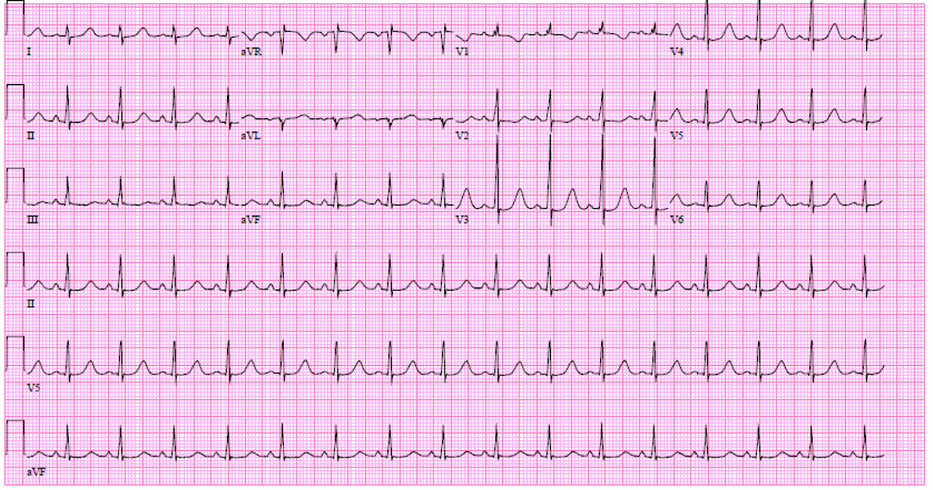 His parents denied any preceding fever, congestion, myalgias, shortness of breath, vomiting or diarrhea. He had no known ingestions.

The most likely etiology of this patient's clinical course and cardiac arrest is:

The correct answer is: B. Obstruction of the left main coronary artery

Diffuse ST segment depression in leads V4-V6 with inverted T waves and ST segment elevation in aVR is an ECG pattern consistent with acute ischemia secondary to occlusion of the left main coronary artery.1 Lead aVR ST segment elevation greater than or equal to lead V1 ST segment elevation is a predictor of acute left main coronary artery obstruction as compared to left anterior descending coronary artery obstruction.2 In this patient, ECG findings resolved once he was deployed on ECMO and clinically stabilized. Quick resolution of his ST segment changes makes an inflammatory process such as myocarditis less likely. While this patient's post ECMO ECG does show a prolonged QTc, this is a common and transient finding post cardiac arrest.3 Although worthwhile to have long QT syndrome in the differential, transient ischemic ECG findings would not be expected in this situation. A variety of ECG abnormalities can be seen in hypertrophic cardiomyopathy, but such abnormalities would similarly not be expected to be of a transient nature.

The aortic origins of the coronary arteries could not be definitively demonstrated by echocardiography. After a failed trial off ECMO, the patient underwent a diagnostic cardiac catherization. Angiography was notable for an anomalous left main coronary artery from right sinus of Valsalva, arising higher and more anterior at the most leftward aspect of the right sinus with long segment stenosis and an intramural course. No collateral vessels were present. There was an estimated 71% minimum luminal diameter narrowing and 91% minimum luminal area narrowing. The coronary artery system was left dominant. 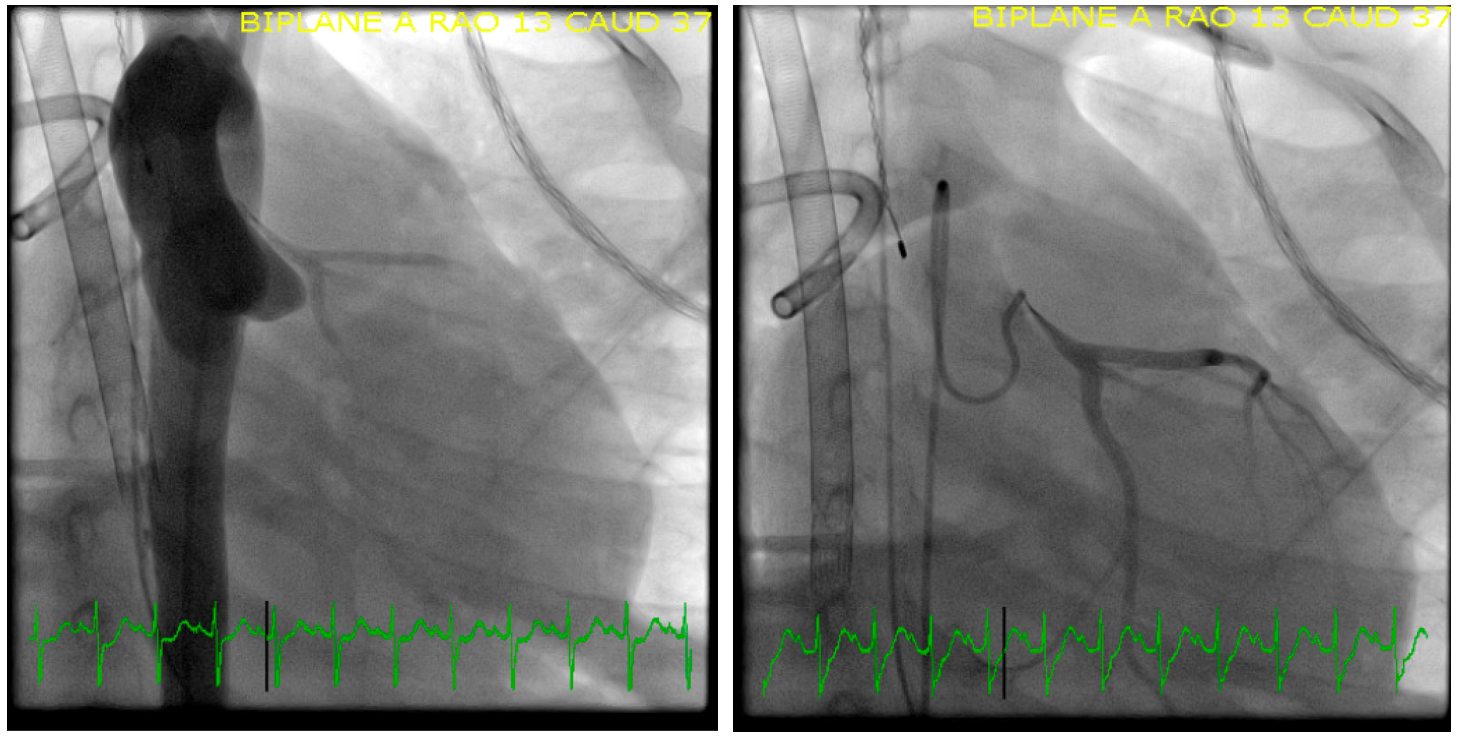 Intraoperative inspection confirmed the anomalous left coronary artery (ALCA) arising from the right sinus with an approximate 8mm intramural course. An unroofing procedure of the left main coronary artery was performed. In this procedure, the proximal ascending aorta is transected to visualize both coronary ostia. A coronary probe is then inserted into the anomalous coronary to mark its intramural course. The roof of the anomalous left coronary is then excised, opening the intramural segment to the lumen of the left sinus of Valsalva and aortic blood flow.4 The patient was decannulated from ECMO on the first post-operative day. He was weaned from inotropic support 10 days later and had only mildly decreased left ventricular systolic function. He was discharged 16 days after initial presentation and has made a full recovery without any ongoing sequelae from his event. He is currently on metoprolol and lisinopril.

Coronary artery anomalies are a rare but known cause of sudden cardiac death (SCD) in otherwise healthy individuals. A large retrospective review of sudden death among military recruits found that an anomalous coronary artery was discovered by autopsy in one-third of those whose sudden death was attributed to a cardiac abnormality.5 The origin and course of the coronary artery is important in the risk for SCD. Evidence suggests that an anomalous right coronary artery (ARCA) is approximately 6 times more common than an ALCA but that an ALCA is responsible for the majority of SCD related to an anomalous aortic origin of the coronary artery (AAOCA). The anomalous coronary likely results in compression or occlusion during exercise, leading to myocardial ischemia and ventricular arrhythmia. The exact mechanism is unclear, however it is felt that an interarterial course (anomalous coronary artery travels between the pulmonary artery and aorta), an intramural course (a variable length of the anomalous coronary artery travels within the wall of the aorta) and coronary ostial abnormalities (slit like instead of the typical round or ovoid appearance) represent a heightened risk for sudden cardiac death.6-8 The majority of patients do not have preceding cardiovascular manifestations prior to their presentation with SCD.6 In our patient's case, the clinical presentation and ECG findings were highly suggestive of cardiac arrest due to left ventricular ischemia resulting from LMCA occlusion. A non-diagnostic echocardiogram prompted diagnostic cardiac catheterization and surgical intervention upon confirmation of the diagnosis.

YOU ARE HERE: Home > Education and Meetings > Cardiac Arrest in an 8-Year-Old