Constrictive Pericarditis: A Spectrum of Disease Manifestations and Management

Patient is a 47-year-old male with a past medical history significant for hypertension and obesity who presents to clinic with shortness of breath, swelling of both lower extremities and abdomen as well as intermittent low-grade fevers. Prior to clinic presentation (8 months prior), he was seen at an outside health care facility where he underwent an extensive work-up including computed tomography (CT) of his chest/abdomen/pelvis as well as echocardiogram. He was found to have a small pericardial effusion at that time. He was also found to have an elevated erythrocyte sedimentation rate (ESR) and C-reactive protein (CRP). He was ultimately diagnosed with viral pericarditis and treated with colchicine, ibuprofen, and oral Lasix. He was monitored locally and was found to have improving inflammatory markers but unfortunately had worsening volume overload and was admitted to his local hospital with decompensated heart and renal failure. He underwent a right heart catheterization during this admission revealing elevated right and left sided intra-cardiac filling pressures with a preserved cardiac index. His pericardial effusion was found to be enlarging for which he underwent a pericardial window with 400 cc of fluid drained. Tissue biopsy from the pericardium revealed chronic fibrous constrictive pericarditis and chronic lymphocytic pericarditis. At that time he was diuresed to euvolemia and discharged home with a 6-month prednisone taper. Colchicine and ibuprofen were discontinued due to renal failure. His symptoms significantly improved while taking prednisone. Unfortunately, his symptoms recurred after finishing the prednisone for which he presented to Cleveland Clinic for a second opinion.

Laboratory work-up while in clinic revealed normal white blood cell, hemoglobin and platelet counts. His creatinine was found to be back to his baseline at 0.96 mg/dL. He had an NT-ProBNP that was obtained and was elevated at 653 pg/mL (<125 pg/mL). ESR and ultra-sensitive CRP were both elevated with values of 29 mm/hr (0-15 mm/hr) and 87.3 mg/L (<3.1 mg/L), respectively. Echocardiogram was obtained revealing preserved biventricular size and function with a dilated inferior vena cava (IVC), mild septal bounce and mild respiratory variation of mitral and tricuspid inflows, 8.0% and 17.0%, respectively (Figure 1: A and B). Lastly, he underwent cardiac magnetic resonance imaging (MRI) which revealed a moderate circumferential pericardial delayed enhancement and increased pericardial signal on T2 STIR imaging indicative of pericardial edema. There were findings also of a mild septal bounce, mild pericardial thickening and a dilated IVC (Figure 1: C and D). 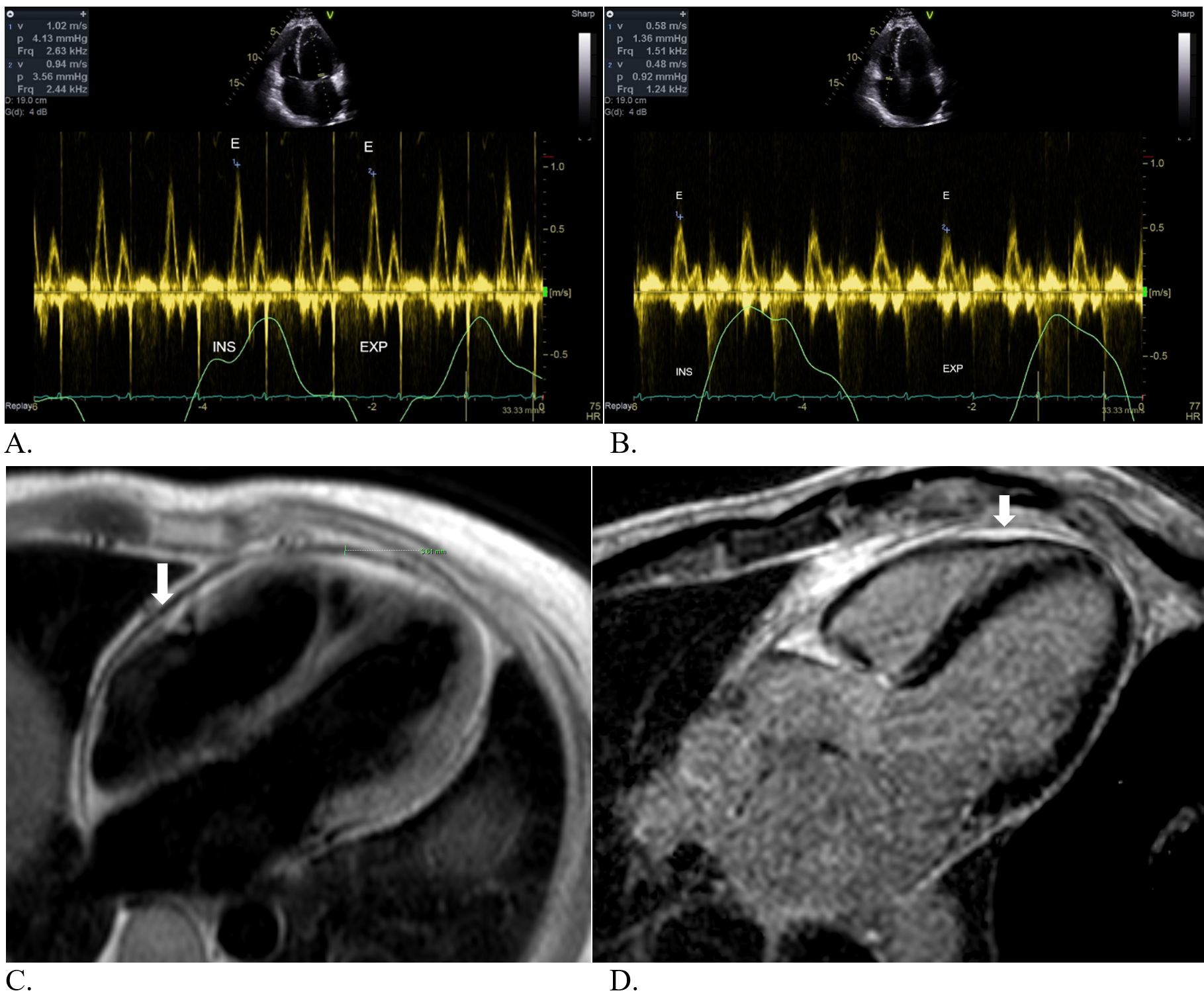 Given this patient's clinical course, what is the next best step?

The correct answer is: B. Resume prednisone taper for 4 weeks with the addition of twice daily colchicine.

YOU ARE HERE: Home > Education and Meetings > Constrictive Pericarditis: A Spectrum of Disease Manifestations and Management