A 72-year-old female with a past medical history of giant cell arteritis (GCA) was referred to our pericardial clinic with chronic recurrent pericarditis. Patient had three episodes of recurrent pericardial and pleural effusions, the first occurring with large vessel abnormalities, later biopsy proven features of giant cell arteritis. She has been hospitalized three times in 10/2019, 5/2020, 10/2020 with features of an inflammatory disease process with significant pleural and pericardial effusions. The rest of her history is significant for anxiety, hyperlipidemia hypertension and paroxysmal atrial fibrillation on chronic anticoagulation (apixaban).

Approximately 18 months prior to presentation, the patient visited the emergency department (ED) with the primary complaint of severe temporal headache. At that time, erythrocyte sedimentation rate (ESR) and C-reactive protein (CRP) were markedly elevated, 91 mm/hr and 64.3 mg/dL respectively. Bilateral temporal artery biopsy confirmed the diagnosis of GCA. Magnetic resonance angiography was also consistent with vasculitis revealing large vessel abnormalities. During that hospital admission, the patient was found to have bilateral pleural effusions and pericardial effusion. Thoracocentesis revealed transudative pleural fluid with negative cytology, cultures, and no malignant cells. In addition, the patient underwent pericardiocentesis due to concern for early cardiac tamponade formation. Pericardial fluid analysis was also negative for cytology, cultures, and had no malignant cells. During this hospital stay, patient also underwent a renal biopsy, which was significant for IgA nephropathy and thin glomerular basement membrane nephropathy. The patient was seen by rheumatology and started on prednisone 60 mg OD with a subsequent taper which led to symptomatic improvement of her headache, normalization of the ESR and CRP (10 days post-hospital discharge), and resolution of the pleural and pericardial effusions (2 weeks post-hospital discharge). At this point given the results of the kidney biopsy, patient was not started on any nonsteroidal anti-inflammatory drugs (NSAID) therapy.

Approximately 7 months after the first admission, when the patient was near completion of the prednisone taper (~5 mg/day), the patient presented again to the ED for shortness of breath and abdominal discomfort. She was again found to have pleural and pericardial effusions. Chest x-ray (CXR) revealed mild-to-moderate pleural effusion with an elevated ESR (99 mm/hr) and CRP (107.8 mg/dL). During this hospitalization, the patient did not have any symptoms of active GCA such as headache, visual disturbance, jaw/tongue claudication, or scalp tenderness. A thoracocentesis was repeated for the pleural effusion and pleural fluid; analysis was same as the prior admission. The patient was restarted on oral 60 mg prednisone daily and tocilizumab 162 mg subcutaneously per week was added. At this point, it was felt that the GCA was associated with recurrent pleural and pericardial effusions.

The patient was re-admitted after 6 months of the second re-admission, for dyspnea, dry cough, and fatigue. She was found to have similar recurrent pleural and pericardial effusions. At this time, she was on 7.5 mg/day of prednisone and continued to deny headache or any other symptoms of active GCA. CXR at this time revealed moderately large left pleural effusion which was increased from the previous CXR. Echocardiogram was performed and showed a moderate sized pericardial effusion with respiratory variation of mitral flow and left ventricular outflow tract (LVOT) velocities indicative of tamponade physiology. Pericardiocentesis was performed and pericardial fluid analysis this time was consistent with an inflammatory process revealing exudative fluid (serum protein 6.5 and pleural fluid protein 3.3), but remained negative for cytology, cultures, and malignant cells. The patient's prednisone dose was increased to 60 mg OD and tocilizumab was continued on hospital discharge. She was also started on oral colchicine 0.6 mg BID and azathioprine 100 mg/day. A cardiac magnetic resonance imaging (CMR) was performed which showed delayed gadolinium enhancement of the pericardium consistent with pericarditis (Figure 1). There was no pericardial effusion, or pericardial thickening. Findings were not consistent with the presence of constrictive physiology. There was no increased pericardial signal intensity on T2 STIR imaging to suggest pericardial edema. Also, a pericardial biopsy was performed to ascertain the cause of recurrent symptomatic dyspnea and moderate pericardial effusions, which revealed acute and organizing pericarditis. On follow up in the pericardial specialty clinic (6 months after last hospital admission), repeat echocardiography and CMR were performed. Echo showed a left ventricle that was severely dilated. Left ventricular systolic function was normal (EF = 72 ± 5%). The right ventricle was normal in size with a normal systolic function. CMR showed mild lateral wall pericardial late enhancement but did not reveal any pericardial effusion, pleural effusion, or any signs of myocardial scar or inflammation. The patient continued to have worsened pleural and pericardial effusion during tapering dose of prednisone therapy. She was switched from tocilizumab to rilonacept therapy. 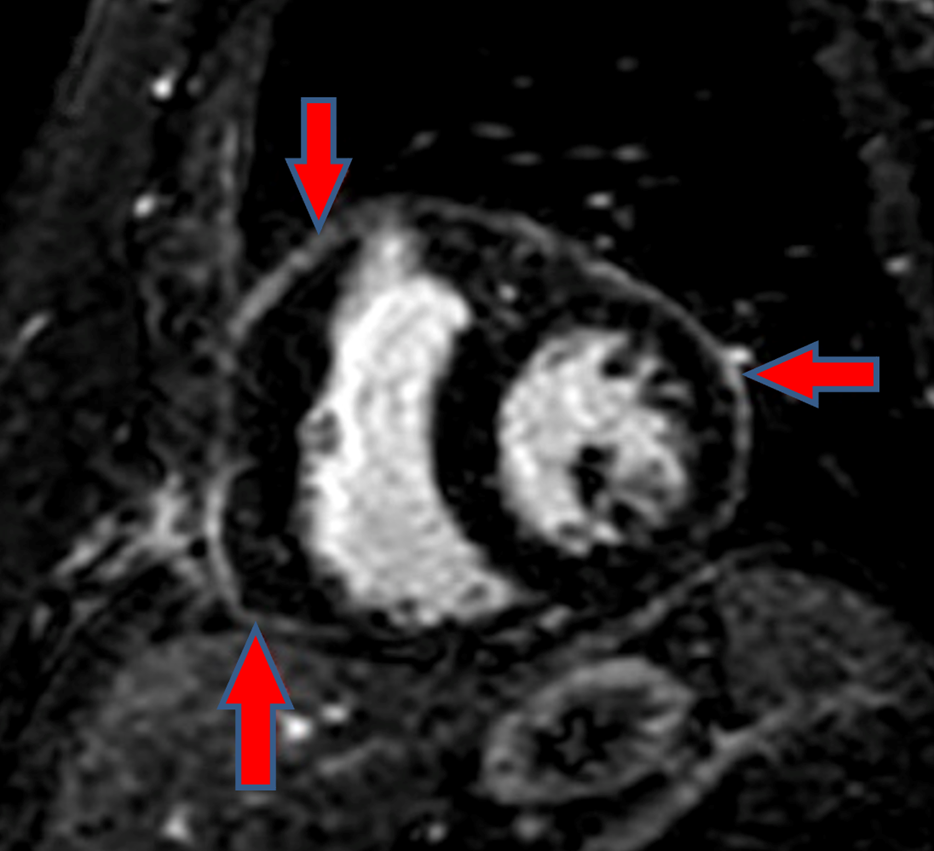 What is the incidence of pericarditis in GCA patients?

GCA is an auto-immune vasculitis diagnosed in >50-year-olds, that causes inflammation of large and medium sized arteries. Symptoms usually include headaches, jaw claudication, scalp tenderness, and abrupt visual disturbances. Typically, the inflammatory markers (ESR and CRP) are elevated and are used as sensitive marker of the disease and progression. Though rare, up to 5% of GCA patients can have cardiac sequelae such as pericarditis, myocarditis, coronary vasculitis, and aortic regurgitation secondary to aortic aneurysm.1 Tiosano et al. performed a cross-sectional study which included 4,329 GCA patients and demonstrated the rate of pericarditis among GCA patients to be 1.22%. In their study, GCA was found to be independently associated with pericarditis [odds ratio (OR): 1.69, 95% CI: 1.16–2.144)].2 This association was especially prominent in those of age <70 years. Another retrospective study found the prevalence of pericardial effusion in GCA patients to be 3.5% (95% CI: 1–8.7).3 Pericarditis in these patients presents as pleuritic chest pain and dyspnea along with other symptoms of active GCA, such as, headache, jaw claudication, scalp tenderness, or polymyalgia rheumatica (akin to the first presentation of the described patient). Pericarditis may precede or coincide with classic GCA symptoms.4 Interestingly, in approximately 30% of reported cases, pericarditis has presented in the absence of the typical GCA symptoms.1 Therefore, it is crucial to exclude causes such as infection and malignancy before assuming GCA to be the cause of pericarditis.

Per the 2015 European Society of Cardiology (ESC) guidelines for the diagnosis and management of pericardial diseases, 5-15% of patients with acute/recurrent pericarditis may have an underlying systemic auto-immune disease.5 Hence, in patients presenting with recurrent pleural effusion and pericardial effusion, systemic autoimmune and autoinflammatory diseases should be considered, including antineutrophil cytoplasmic antibody (ANCA) associated vasculitis, IgG4 related disease, sarcoidosis, systemic lupus erythematosus, rheumatoid arthritis, and mixed connective tissue disorder. Considering consistent clinical findings, a targeted etiological search should be performed. If an underlying systemic disorder is identified, the treatment should be targeted towards controlling the underlying disease.5 Typically for patients who present with suspected pericarditis, an electrocardiogram and echocardiogram are considered essential for initial testing. An echocardiogram is often normal unless there is an associated pericardial effusion and should be performed urgently if cardiac tamponade is suspected. A chest computed tomography may be supportive in confirming the diagnosis. CMR provides tissue characterization in patients with suspected pericarditis. It may show active pericardial inflammation with edema or late gadolinium enhancement. For the described patient, the echocardiogram did not show any pericardial effusion and CMR showed delayed gadolinium enhancement of the pericardium. These findings confirmed the diagnosis of pericarditis and helped in grading the severity of the inflammation.

For patients with auto-immune disease, presenting with pericarditis in the absence of other symptoms of the underlying auto-immune disease (such as jaw claudication, arthritis, etc.), one should continue treating the underlying auto-immune disease. Symptomatic patients should be treated with the intensifying patient's immunosuppressive regimen, started with adding colchicine. After colchicine, adding glucocorticoids is preferred over NSAIDs in the case of auto-immune pericarditis.6 In patients with GCA, tocilizumab combined with prednisone is shown to be superior to prednisone alone to sustain glucocorticoid-free remission.7 Also, azathioprine is shown to be an alternative treatment for GCA patients requiring high-dose glucocorticoid therapy.8

Future research should aim to focus on early identification of patients who are at risk of recalcitrant and protracted pericarditis. This includes randomized controlled trials to compare available therapeutic options for recurrent pericarditis, especially in the setting of auto-immune etiologies.

YOU ARE HERE: Home > Education and Meetings > Giant Cells Arteritis and Recurrent Pericarditis