Assessing the Symptomatic Patient With Hypertrophic Cardiomyopathy and Valve Disease

A 73-year-old woman with known hypertrophic cardiomyopathy (HCM) presents with progressive dyspnea on mild exertion over the prior few months.

She was originally diagnosed with HCM 9 years earlier and underwent alcohol septal ablation (ASA) due to medically refractory symptoms. A postoperative echocardiogram demonstrated left ventricular outflow tract (LVOT) gradient 9 mm Hg at rest, which did not change after a Valsalva maneuver. Over an interval of 3-4 years, she reported a marked improvement in her symptoms. She then, however, started to again report progressive worsening exercise intolerance manifest as dyspnea on exertion. At the time of this presentation, she is unable to walk more than a few feet without becoming markedly short of breath. She was previously able to walk around a large box store without symptoms but now needs to use a motorized cart. She has also started developing worsening lower extremity swelling and orthopnea.

Family history: Father with sudden cardiac death in his early fifties (unclear etiology), one sister with HCM who has undergone ASA, one brother died in infancy, second brother died due to respiratory issues related to chronic obstructive pulmonary disease. Two daughters: one screened for HCM with no evidence and the other chooses not to be screened.

She was unable to tolerate higher doses of metoprolol due to presyncope. As a result of her progressive symptoms, she undergoes repeat transthoracic echocardiography (Figure 1). 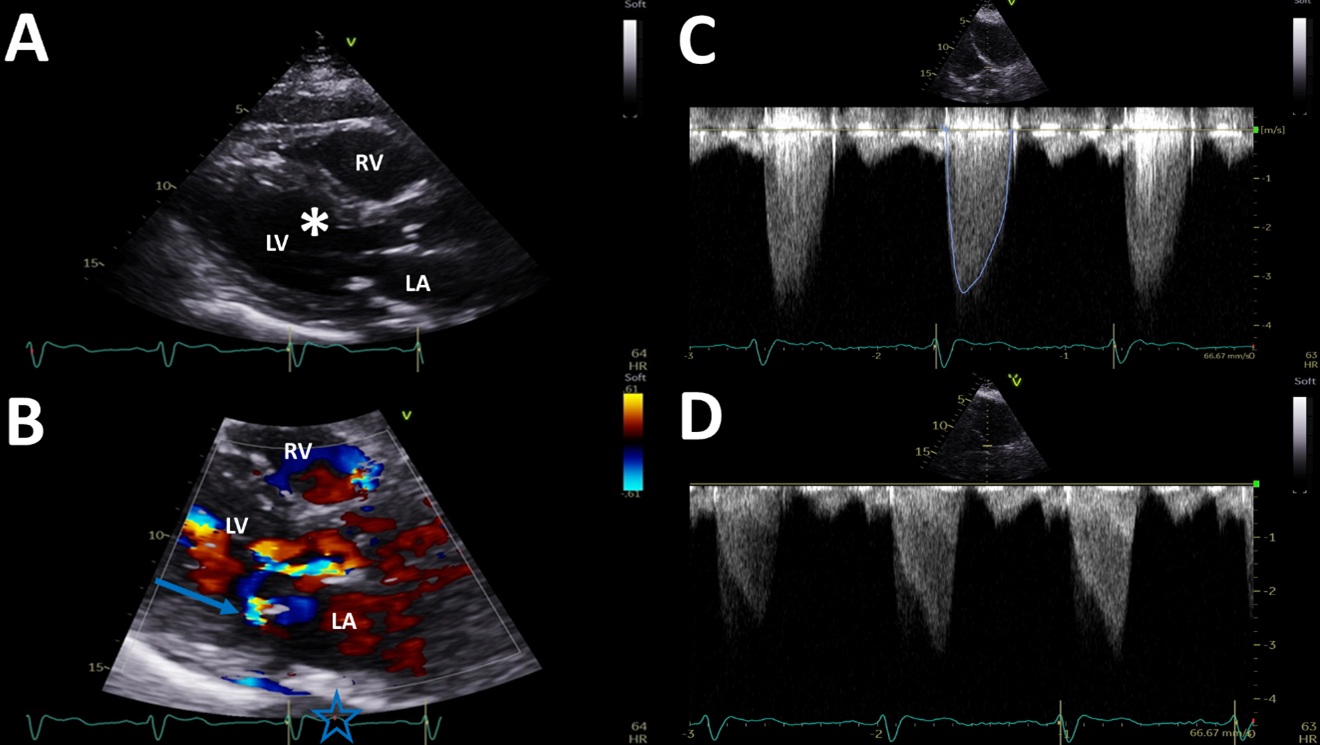 There is a crescent-shaped left ventricle (LV) with asymmetric LV hypertrophy (septum 17 mm) and hyperdynamic LV function (Figure 1, panel A). The anteroseptum exhibits a shaved-off appearance consistent with prior septal ablation (denoted by "*"). There is systolic anterior motion (SAM) of the mitral valve (MV) and at least moderate mitral regurgitation (MR) (Figure 1, panel B; arrow). The aortic valve (AoV) is moderately calcified with restricted opening; there is an early peaking gradient through the AoV with mean gradient 27 mm Hg (Figure 1, panel C). There is also a late-peaking gradient consistent with LVOT obstruction (peak gradient 34 mm Hg) at rest (Figure 1, panel D) that increases to 55 mm Hg after Valsalva maneuver and 46 mm Hg after a premature ventricular contraction (PVC).

With these echocardiographic findings of dynamic LVOT obstruction, SAM with at least moderate MR, and a restricted AoV with moderate aortic stenosis (AS), she is presented and discussed at your institution's HCM Center of Excellence multidisciplinary meeting. This monthly conference includes general cardiologists, imaging specialists, interventional cardiology, and cardiac surgery. As there is recurrent LVOT obstruction on maximally tolerated medical therapy, septal reduction therapy is discussed. There are two key questions addressed:

With evidence of LVOT obstruction, AS, and MR on her transthoracic echocardiogram as well as numerous risk factors for atherosclerotic cardiovascular disease, she undergoes left heart catheterization and transesophageal echocardiography to better evaluate these potential contributions to her presenting symptoms (Figure 2). 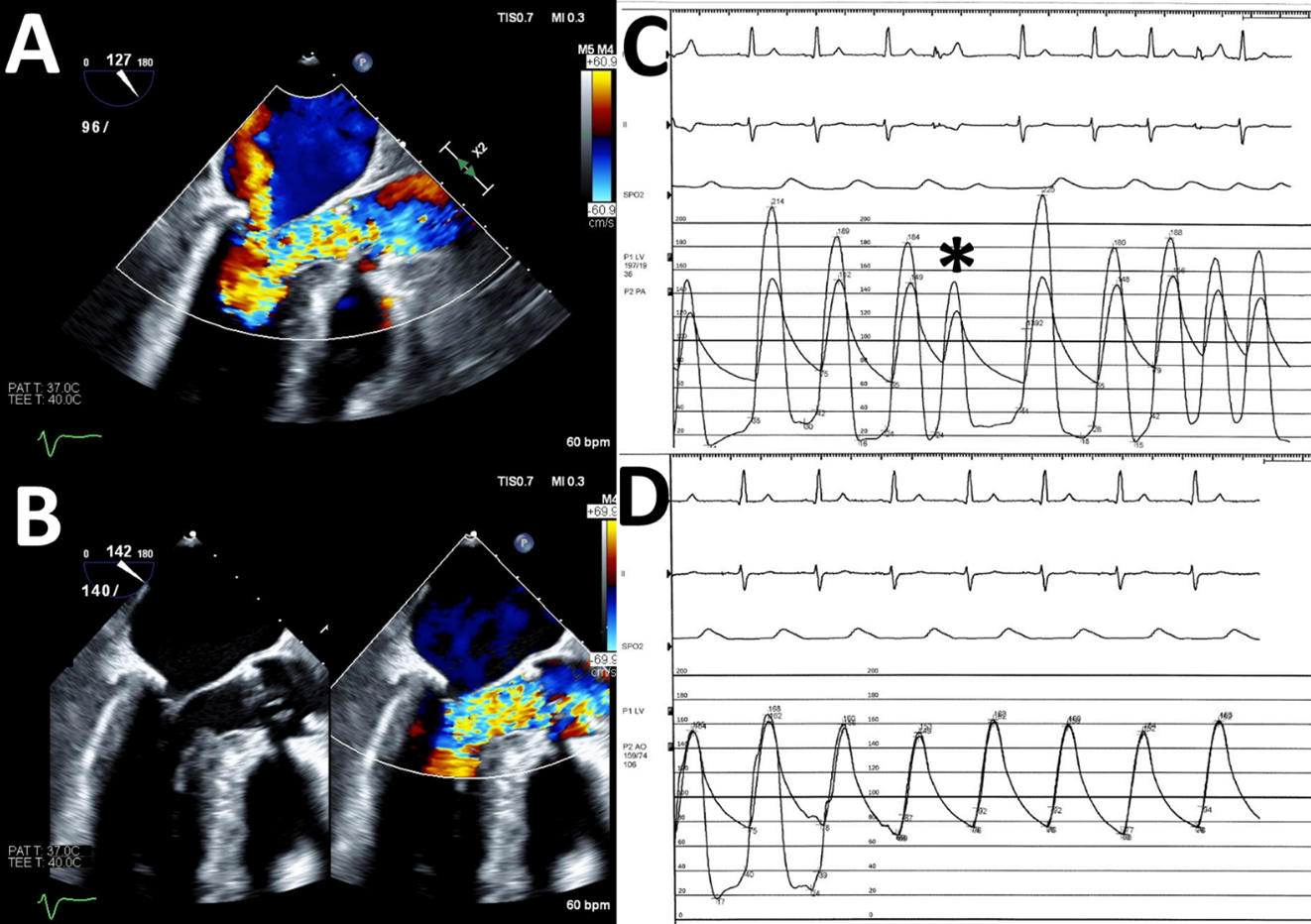 Which one of the following is your recommendation regarding this patient's management plan?

This patient has refractory symptoms with an inability to further increase her medical therapy because she is on her maximally tolerated dose of beta-blockers. The first question to answer is what important factors need to be considered prior to repeat septal reduction therapy. Her age would favor ASA but the presence of significant coronary artery disease (CAD; i.e., high-risk lesion involving the bifurcation of the LAD and diagonal branch) and history of paroxysmal AF suggest that a surgical approach will have a significant advantage by simultaneously addressing the significant CAD by coronary artery bypass grafting and by lowering her risk of recurrent AF by concurrent MAZE, as recently described. Another consideration is the residual basal septal thickness, as repeat septal reduction therapy can increase the risk of an iatrogenic ventricular septal defect. On her transesophageal echocardiogram, her end-diastolic basal septal thickness was 17 mm. Next, careful review of her coronary angiogram showed small septal branches off the proximal LAD. The remaining septal arteries and their anticipated geographic perfusion territories were considered potentially suboptimal for adequate repeat ASA. In sum, surgical myectomy was determined to be the best approach to reduce her dynamic LVOT obstruction, address her AF with a concomitant MAZE procedure, and surgically treat her obstructive CAD.

After the best approach for septal reduction therapy has been determined, the second question is whether there are other coexisting conditions that may be contributing to her symptoms, especially her MR and AS.

Next, her echocardiogram also demonstrated a calcified AoV with mean gradient 26 mm Hg, consistent with moderate AS. In patients with LVOT obstruction and moderate AS, consideration should be made for valve replacement, as this "extra" afterload on the LV can precipitate worsening symptoms in patients with HCM. During her cardiac catheterization, however, her mean gradient was only 5-10 mm Hg, which is consistent with mild AS. Thus, it was thought that her AoV disease was not likely contributing to her symptoms and therefore would not require intervention.

Answer choice A is an incorrect choice because the MR resolved after the PPP, implying that there is no native MV pathology that requires intervention.

Answer choice C is an incorrect choice because her AoV disease is mild and, thus, unlikely to be a large contributor to her symptoms. As discussed in answer choice A, MV replacement is not indicated.

Answer choice D is an incorrect choice because septal myectomy would be preferred in this patient with coexisting AF and significant CAD. As with answer choices A and C, her AoV and MV do not require intervention.

YOU ARE HERE: Home > Education and Meetings > Assessing the Symptomatic Patient With Hypertrophic Cardiomyopathy and Valve Disease