Post-Acute Sequelae of SARS-CoV2 Infection in a Collegiate Athlete: Evaluating the "Long-Hauler"

A 21-year-old female collegiate track and field athlete with a history of exercise-induced asthma and acute COVID-19 infection 4 months prior is referred to a sports cardiologist for evaluation of ongoing exercise intolerance, chest pain, shortness of breath, and lightheadedness with activity.

Her acute COVID-19 symptoms included fever for 2 days, congestion, myalgias, back pain, palpitations, chest pain, and anosmia and ageusia that lasted for 1 week. At the time, she had no shortness of breath or cough. She was not hospitalized and received no treatments. A trial of her albuterol inhaler, used previously for exercise-induced asthma, did not alleviate her symptoms.

Prior to developing COVID-19, she was exercising at least three times per week (running, rowing, and strength training) without limitation. After acute infection, she was unable to resume exercise due to ongoing symptoms and estimated that she could only exert herself to about 25-50% of her prior intensity. Her chest pain – initially constant – was exacerbated by activity and deep breathing. Her lightheadedness and sensation of heart racing worsened with activity/walking and positional change. She experienced lingering fatigue, difficulty sleeping, and impaired concentration. These symptoms persisted for 4 months, up to the time of evaluation by a sports cardiologist.

She has no significant family history, denying any history of sudden cardiac death, channelopathies, aortopathies, and cardiomyopathies. She denied use of illicit substances and performance enhancing drugs. 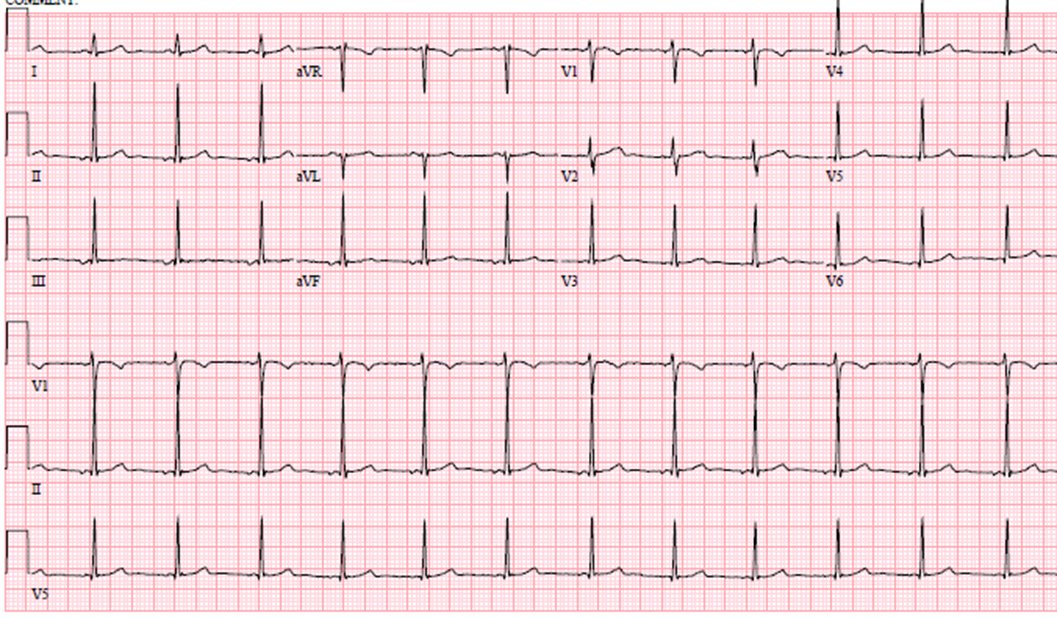 Additional testing performed prior to her evaluation by a sports cardiologist included an ECG stress test (treadmill Bruce protocol) where she exercised for 12 minutes, achieving 95% of maximum predicted heart rate (MPHR), and 13.4 METS. She endorsed 6 out of 10 chest pain while exercising. However, her ECG showed normal sinus rhythm, sinus tachycardia, no ischemic ST-segment changes, and no exercise-induced arrhythmias.

She proceeded with ambulatory rhythm monitoring (Zio Patch), which she wore for 8 days. Her average heart rate was 84 bpm (range 56-178 bpm), and there were no significant atrial or ventricular arrhythmias nor atrioventricular blocks or pauses. Symptoms of heart racing and dizziness at a low level of activity correlated to sinus tachycardia at 140-150 bpm.

She completed a maximal effort (respiratory exchange ratio >1.09) cardiopulmonary exercise test, exercising for 13:06 minutes (Bruce protocol), and achieving 10.9 METS with a maximum heart rate of 196 bpm (98% MPHR). Her ECG revealed sinus rhythm with no exercise-induced atrial or ventricular tachyarrhythmias, no increase in ventricular ectopy, and no atrioventricular conduction abnormalities. Exercise was terminated after the patient endorsed shortness of breath and fatigue, with a rating of perceived exertion of 9/10. Additionally, she reported 7/10 non-pleuritic chest pain with exercise. Pulmonary auscultation post-exercise was normal. Peak oxygen consumption (VO2) was 38.3 ml/kg/min (115% predicted based upon age- and gender-matched controls). Oxygen pulse achieved was 108% predicted. Blood pressure response was normal. Anaerobic threshold was reached at 45% of the peak VO2. Respiratory rate at anerobic threshold was 26, and 54 at peak. Parameters of gas exchange were normal and oxygen saturations remained within normal limits: 99% at rest and 97% at peak stress. 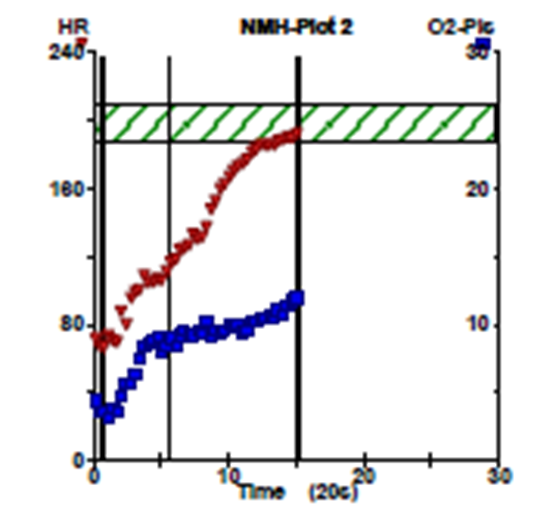 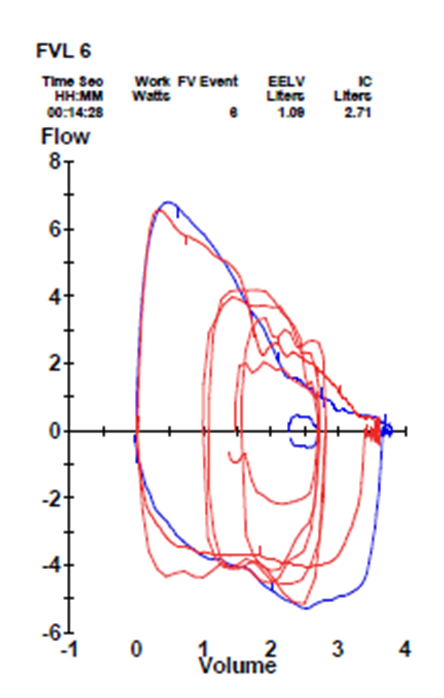 What is your diagnosis and proposed management?

The correct answer is: B. Multifactorial exercise intolerance, does not meet criteria for POTS, recommend graduated exercise program, increased fluid and sodium intake

COVID-19 has innumerous potential effects on the cardiovascular system. Due to heightened concern for possible COVID-19 myocarditis early on in the pandemic, initial guidelines for cardiovascular evaluation prior to return to sports were conservative.1 However, subsequent large registry data taken from young athletic populations have shown an extremely low prevalence of cardiac injury in athletes (0.6-0.7% using primarily the current screening algorithm).2,3

Symptoms of chest pain, ongoing exercise intolerance, and disproportionate shortness of breath warrant a thorough evaluation for and exclusion of myocarditis, pericarditis, and pulmonary embolism. Since this athlete had moderate infection with cardiopulmonary symptoms, testing was appropriately conducted per current recommendations,4 but her evaluation did not show any evidence of myocarditis or pericarditis.

Causes of chest pain unrelated to COVID-19 infection should be excluded. Anomalous coronary artery origins were excluded via visualization of normal coronary ostial origins on echocardiography. Atherosclerotic disease was felt to be very low probability given her age and lack of cardiovascular risk factors. D-dimer was within normal range making pulmonary embolism unlikely. Pulmonary function testing was not suggestive of gas exchange abnormalities, and her cardiopulmonary testing did not reveal pulmonary limitation.

After exclusion of malignant causes, a growing population of patients with prior COVID-19 infection – irrespective of symptom severity – still suffer from exercise intolerance well after acute infection and often endorse concomitant chest pain, palpitations, lightheadedness, and fatigue. Post-viral autonomic dysfunction has been well-described and has multiple potential mechanisms: hypovolemia/low stroke volume, deconditioning, direct viral effects on the central and/or peripheral sympathetic nervous system, and a possible autoimmune component.5 It does tend to improve over time with increased fluid and sodium intake and a gradual dedicated exercise program for patients with orthostatic intolerance incorporating supine exercise and resistance training.6,7

This patient did not meet the diagnostic criteria for POTS as she had a drop in blood pressure with tilt table testing; additionally, heart rate with standing increased less than 30 bpm (standing heart rate is often >120 bpm).8 In order to meet diagnostic criteria, the patient must have (1) frequent symptoms that occur with standing such as lightheadedness, palpitations, tremulousness, generalized weakness, blurred vision, exercise intolerance, and fatigue; (2) an increase in heart rate of ≥30 bpm when moving from a recumbent to a standing position held for more than 30 seconds (or ≥40 bpm in individuals 12 to 19 years of age); and (3) the absence of orthostatic hypotension (>20 mm Hg drop in systolic blood pressure).8 Furthermore, initial treatment for POTS would be like the recommendations above. Given her history of asthma, beta blockers would not be first line.

It should be noted that nitroglycerin should not be given during tilt table testing if an orthostatic response has already been elicited and is rarely helpful for diagnostic purposes due to low specificity.9 Additionally, tilt table testing in athletes may be challenging as many have an orthostatic response due to increased ventricular compliance and large vasodilatory capacity,9 though it is unclear whether autonomic dysregulation related to viral infection would also precipitate a similar response. As such, further investigation is warranted to define a standard of care for athletes with virally-mediated autonomic dysfunction. Concomitant neurologic testing (e.g., skin biopsy, quantitative sudomotor axon reflex testing) may also be helpful in confirming a diagnosis.

Athletes with Post-Acute Sequelae of SARS-CoV2 infection (PASC) may have symptoms that overlap with chronic fatigue syndrome. Time away from training, including modifications in training and interruptions in seasons, will also affect conditioning status and should be considered when comparing exercise tolerance and cardiorespiratory fitness to pre-infection capabilities. Psychosocial factors such as depression and anxiety from profound disruptions in education, training, and social life must also be considered.

Care of these patients can often be challenging, and to date, recommendations for sports participation and treatment strategies in athletes with PASC and have not been defined. Establishing care for athletes with multidisciplinary COVID-19 centers can help streamline referrals to non-cardiac specialists while providing a means for prospective evaluation to identify clinical trends, define reliable diagnostic tools, and develop reliable therapeutics as the pandemic evolves.

YOU ARE HERE: Home > Education and Meetings > Post-Acute Sequelae of SARS-CoV2 Infection in a Collegiate Athlete: Evaluating the "Long-Hauler"