A Troponin of 26.2: Ventricular Tachycardia Storm at the Marathon Finish Line

A 47-year-old highly active female with past medical history of rheumatoid arthritis (RA) presented with lightheadedness and diaphoresis after crossing the finish line at the local marathon. She was found to be in polymorphic ventricular tachycardia (VT) and was shocked three times in the field, intermittently losing consciousness but maintaining pulses. On arrival at the hospital, she was unresponsive and remained in VT for 12 minutes despite multiple defibrillations and intravenous administration of amiodarone, lidocaine, metoprolol, and magnesium. Ultimately, her rhythm degenerated into ventricular fibrillation, terminating after sedation and intubation, with brief requirement of cardiopulmonary resuscitation (CPR).

She had three prior episodes of exercise-associated syncope/presyncope (notably two were also post-marathon), with reportedly normal stress testing. Her only medication is methotrexate for RA. There was no history of smoking, excessive alcohol use, drug use, or supplement use, and she disclosed no family history of cardiovascular disease or sudden cardiac death (SCD).

Her post-arrest 12-lead electrocardiogram (ECG) is shown in Figure 1. Echocardiogram showed a non-dilated left ventricle (LV) with an ejection fraction (LVEF) of 25%; global hypokinesis with the most significant wall motion abnormalities in the anterior, anterolateral, and apical walls; normal right ventricular size with mildly reduced function; and no significant valvular disease. Labs were notable for an initial troponin-I of 2.0 ng/ml with a peak of 26.2 ng/ml, normal electrolytes, transaminitis and transient acute kidney injury post-arrest, total cholesterol of 136 mg/dl, and low-density lipoprotein cholesterol (LDL-C) of 45 mg/dl.

Coronary angiography was performed (Video 1 and Figure 2). There was no evidence of ruptured plaque and only mild non-obstructive atherosclerotic disease. There was dampening in the aortic pressure upon engagement of the left main artery. Cardiac magnetic resonance imaging (MRI) was subsequently performed 2 days following arrest (Figure 3). Transthoracic echocardiography performed 3 days after cardiac arrest demonstrated an LVEF of 50% with near resolution of wall motion abnormalities. ECG prior to discharge is shown in Figure 4. 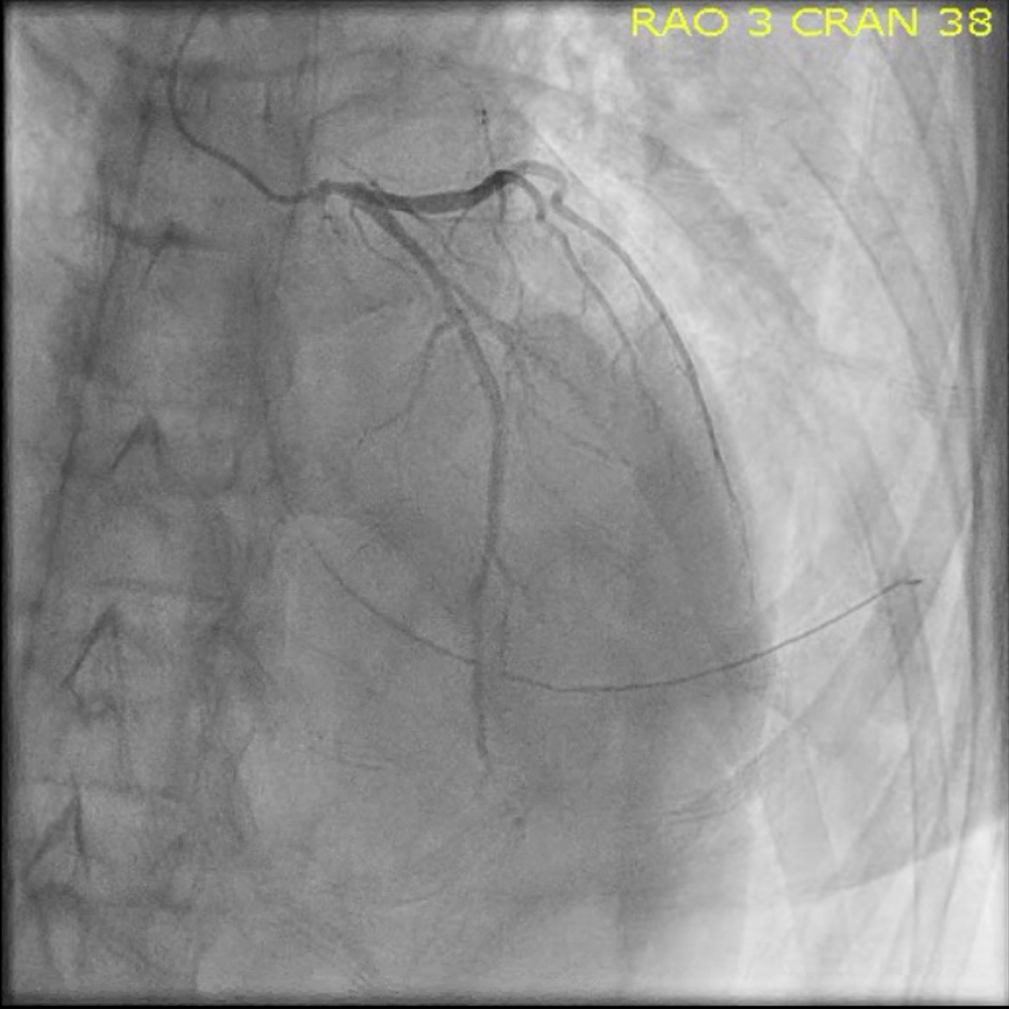 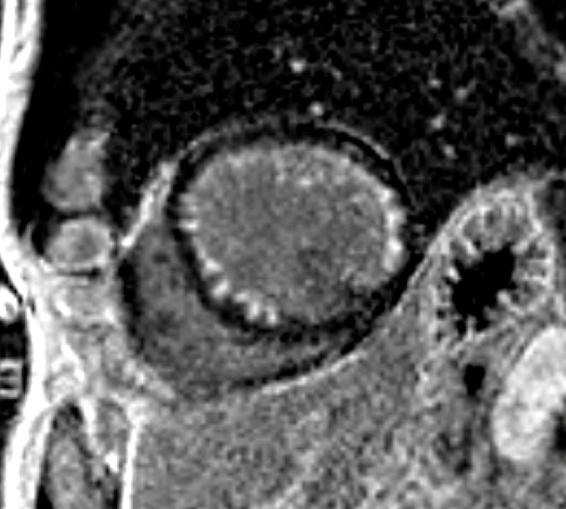 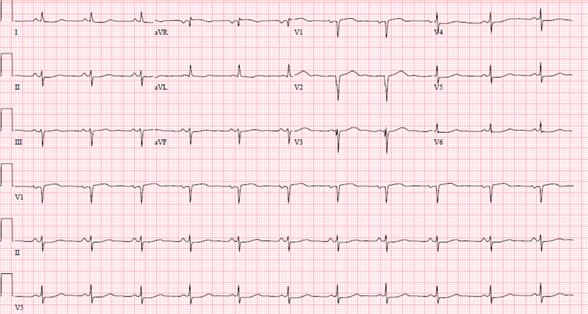 What is the correct diagnosis?

Coronary angiography (Figure 2) revealed spasm of the left main coronary artery with mild atherosclerotic disease. The cardiac MRI (Figure 3) demonstrated circumferential subendocardial late gadolinium enhancement (LGE) of less than 50% of the wall thickness that spared the basal inferior and basal mid inferior wall. The direct observation of coronary spasm and ischemic pattern of LGE on MRI in the corresponding territory with subsequent rapid recovery of LVEF led to the diagnosis and made an underlying cardiomyopathy or stress cardiomyopathy unlikely. Given that the MRI was obtained only 2 days after arrest, the subendocardial LGE may have represented scarring from repeat global ischemia induced while training.

This patient had an extensive history of high-volume, high-intensity exercise. While she had experienced prior syncopal events after prolonged endurance exercise, given the frequency with which she exercised, these events were overall rare. Coronary vasospasm is not a common diagnosis in athletes and is a rare cause of VT and SCD.1,2 Vasospastic episodes occur largely at rest, but may be triggered by exercise in some patients.2 Given the dynamic nature of coronary spasm, definitive diagnosis in autopsy studies is not possible. Hyperventilation, shifts in sympathetic/parasympathetic balance, and oxidative stress are possible reasons for our patient's recurrent episodes following prolonged intense exertion.3,4 Inflammatory disorders  ̶  including RA  ̶  have been implicated as risk factors for coronary vasospasm as well.5 This occurs through multiple mechanisms including endothelial damage through various inflammatory pathways, CRP-mediated activation of adhesion molecules such as ICAM-1 and VCAM-1, and reduction of nitric oxide production.5

Catheter-induced vasospasm is also a known phenomenon and was considered given the location of vasospasm in the left main artery; however, given the recurrent nature of her syncopal events and other imaging findings, exercise-related coronary vasospasm was felt to be the mechanism of her arrest.

While this patient had a very good short-term outcome, she remains at significant risk for recurrent events. In a study of 2,032 patients with vasospastic angina, patients who had survived cardiac arrest had a higher risk of cardiac death and recurrent ventricular tachyarrhythmia compared to those patients without prior cardiac arrest, which highlights the need for close follow-up and continued treatment.10 A large Japanese registry demonstrated that patients who had coronary vasospasm with an out-of-hospital cardiac arrest had a significantly lower major adverse cardiac event–free survival at 5 years (72% vs. 92% in those without cardiac arrest).2 Per the most recent American College of Cardiology (ACC)/American Heart Association (AHA)/Heart Rhythm Society (HRS) guidelines, the recommendation for ICD implantation was deemed appropriate, and due to her young age and lack of need for pacing, a subcutaneous ICD was chosen.11 She was counseled to refrain from vigorous exercise and was instructed to follow up with her cardiologist for assessment of response to treatment prior to increasing activity. She was discharged on low-dose aspirin, amiodarone, and amlodipine.

YOU ARE HERE: Home > Education and Meetings > A Troponin of 26.2: Ventricular Tachycardia Storm at the Marathon Finish Line