A 65-year-old man presented with shakiness and transient loss of consciousness. On arrival to the emergency department, his blood pressure and heart rate in supine position were 154/84 mmHg and 101 bpm, respectively; 3 minutes after standing up, his blood pressure and heart rate were 162/91 mmHg and 102 bpm, respectively. The patient's wife, who witnessed the episode, reported that the patient's eyes suddenly rolled back before he started shaking and then lost consciousness for 30 seconds. The patient was instantly oriented after regaining consciousness. She reported similar episodes during the month, prior to admission, that were associated with cough spells. A neurological exam did not reveal any deficits, and the cardiopulmonary exam was unremarkable. The patient was newly diagnosed with lung adenocarcinoma 3 weeks prior to presentation following intractable episodes of dry cough and low-grade fevers. The patient was recently started on radiation and chemotherapy regimen, including carboplatin, pemetrexed, erlotinib, and prochlorperazine. Magnetic resonance imaging of the brain was negative for metastasis. The patient's electrocardiogram (ECG) is shown in Figure 1. 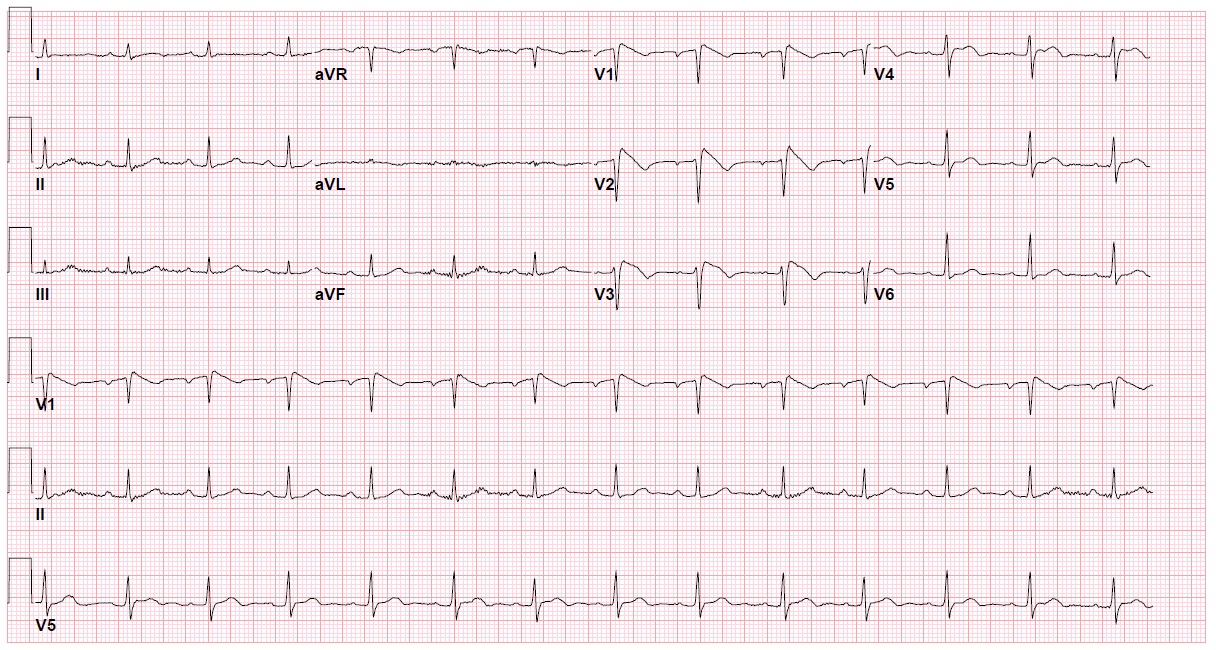 What's the most appropriate next step in management?

The initial ECG showed sinus rhythm with coved ST-segment followed by a negative T wave in right pericordial leads (V1-V3), consistent with type 1 Brugada pattern. Brugada syndrome is a genetic disease characterized by ST-segment elevation ≥2 mm in ≥1 right pericordial lead, with a high prevalence in Asian populations.1 The distinct morphology of ST-segment elevation in Brugada is crucial in differentiating the disease from myocardial infarction. ST-segment tend to be coved or saddle back in Brugada pattern ECG, whereas ST-segment elevation in the setting of myocardial infarction tends to be convex, dome shaped, and associated with reciprocal changes (answer A). Brugada syndrome has been associated with sudden cardiac death; therefore, ICD implantation is reasonable in patients with Brugada pattern ECG presenting with syncope of arrhythmic etiology (answer B).1,2 Although syncope can masquerade as a seizure, the latter can be distinguished by the presence of postictal confusion (answer C). The ECG is a valuable tool in the initial evaluation of patients with syncope.1 The ECG provides many clues on the culprit disease, including Brugada syndrome, long QT syndrome, and Wolff-Parkinson-White syndrome, among others.1 Is ICD always the right answer in Brugada patients with syncope? It is imperative to differentiate arrhythmogenic syncope, where ICD is indicated from benign reflex syncope.2 A tilt table test can be performed in the absence of a solid evidence of arrhythmogenic syncope and when reflex syncope is suspected even in presence of Brugada pattern ECG (answer D).1 Although the tilt table test has its limitations, it's a valuable diagnostic tool when the suspected reflex syncope lacks a confident diagnosis. In this patient's case, syncope is more likely a reflex syncope triggered by repeated cough episodes. A cardioinhibitory response and consequent autonomic dysregulation are among implicated mechanisms in most cases. It's crucial to note that fever can trigger the Brugada pattern ECG and furthermore lead to cardiac arrest.3 Therefore, fever should always be suppressed in patients with Brugada pattern ECG or Brugada syndrome patients. In conclusion, syncope in the setting of Brugada pattern ECG should be correlated with clinical context. Only arrhythmia-related syncope is thought to benefit from ICD implantation in this patient subset.

YOU ARE HERE: Home > Education and Meetings > 65-Year-Old Patient Presenting With Seizure