An 80-year-old man with hypertension and dyslipidemia was consulted to our service with palpitations of 2 weeks of evolution. He denied shortness of breath or dyspnea on exertion. The patient had a prostate biopsy 2 months prior to our evaluation that revealed the presence of amyloid in the blood vessel walls and seminal vesicle/ejaculatory duct epithelium. These findings suggested amyloidosis. A fat pad biopsy was negative. On evaluation, his vital signs revealed a temperature of 98.5 F°, blood pressure of 130/60 mm Hg, heart rate of 120 bpm, respiratory rate of 24 respirations per minute, and SpO2 of 98%. Cardiovascular examination was within normal limits, except for an irregularly irregular rate and rhythm. Electrocardiography (ECG) was performed in our clinic that revealed coarse atrial fibrillation with rapid ventricular response (Figure 1). On the day of evaluation, his N-terminal pro-B-type natriuretic peptide was 237, and he had a glomerular filtration rate of 65 mL/min/1.73 m2. We decided to start rate control with metoprolol tartrate 50 mg orally twice a day and anticoagulation with rivaroxaban 20 mg orally daily. Days later he converted to sinus rhythm spontaneously. We ordered an echocardiogram that revealed moderate left ventricular (LV) hypertrophy, normal LV systolic function (LV ejection fraction = 60-65%) and E/E' (avg.): 13.5. Because of these findings, and to clarify the etiology of his LV hypertrophy and high filling pressures by echocardiography, we decided to perform cardiac magnetic resonance imaging (CMRI) to assess for cardiac amyloidosis (Figure 2). A bone marrow biopsy performed later revealed 11% plasma cells and markers suggestive of multiple myeloma. 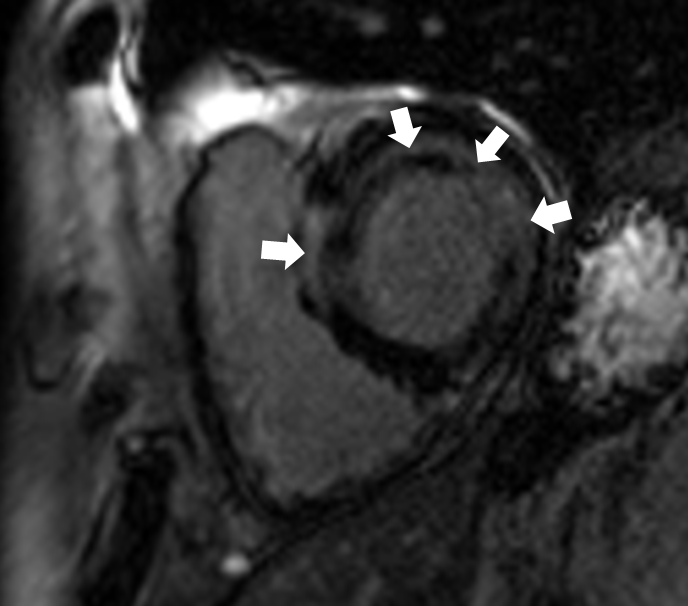 What is the sensitivity and specificity of the LGE pattern in the diagnosis of cardiac amyloidosis by CMRI?

CMRI is useful in differentiating amyloidosis from other causes of LV hypertrophy such as hypertension and hypertrophic cardiomyopathy.1 Diagnosis by echocardiography and ECG, although helpful, is limited by presentations other than the "classic pattern" (low voltage ECG in the presence of LV hypertrophy by echocardiography).2 The characteristic pattern of LGE in cardiac amyloidosis is a global and patchy subendocardial enhancement that doesn't follow a coronary artery distribution.2 Using endomyocardial biopsy as the gold standard, the sensitivity, specificity, and positive and negative predictive value of delayed enhancement CMRI for detection of cardiac amyloidosis is 80-88%, 90-94%, and 92 and 85%, respectively.3,4 This makes CMRI the gold-standard noninvasive method to assess for amyloid infiltration in the myocardium.2 There are also other techniques in CMRI that use noncontrast T1 mapping and extra-cellular volume fraction that have shown good accuracy in the detection of cardiac amyloidosis.5,6 It is appropriate per appropriate criteria from the American College of Cardiology Foundation, the American College of Radiology, the Society of Cardiovascular Computed Tomography, and the Society for Cardiovascular Magnetic Resonance to perform a CMRI with contrast to assess for amyloidosis in myocardium and is supported by an American College of Cardiology Foundation consensus statement on CMRI as well.7,8 In view of the robust accuracy that CMRI offers for the diagnosis of cardiac amyloidosis and placing into context the diagnostic limitations of echocardiography, ECG, and the modest diagnostic sensitivities of abdominal fat pad and bone marrow aspirates (70-80% and 60%, respectively),9,10 we must conclude that upon clinical suspicion of cardiac amyloidosis, CMRI is an excellent noninvasive alternative. In some patients with renal involvement presenting with a glomerular filtration rate of less than 30 ml/min/1.73m2, administration of gadolinium-based contrast agents is contraindicated due to the risk of nephrogenic systemic fibrosis.11

YOU ARE HERE: Home > Education and Meetings > An 80-Year-Old Man With Hypertension and Dyslipidemia With Palpitations of 2 Weeks of Evolution