The patient is a 17-year-old African American male who was in his usual state of good health. While playing in a basketball game, he complained of fatigue and asked to be called out. Two minutes later, sitting next to his coach, he suddenly lost consciousness and became apneic. The coach began CPR and notified EMS who arrived within 10 minutes. They applied an automated external defibrillator (AED), which identified a shockable rhythm. Defibrillation resulted in restoration of sinus rhythm and patient responsiveness. In the ER, his Glasgow Coma Scale score was 8, and he was intubated for airway protection. He was cooled and sent to the intensive care unit for monitoring. Of note, he had no history of chest pain, palpitations, or shortness of breath prior to his arrest. There was also no history of syncope or pre-syncope, and no family history of sudden death. Although he had no known history of drug use per parents, a urine drug screen was positive for marijuana. There were no prior symptoms of constitutional illness: no fever, upper respiratory infection signs and symptoms, appetite change, vomiting, or diarrhea.

Vital signs, and physical exam were within normal limits. His initial, and most elevated troponin, was 0.53. He was eventually extubated and had no neurologic sequelae.

Figure 1 shows his initial electrocardiogram (ECG) obtained from EMS. It is notable for sinus rhythm, increased voltage (although likely within normal for age), diffuse T-wave inversions, and ST depression in V2-V4. No pathologic Q waves are seen.

A transthoracic echocardiogram was ordered was within normal limits. Reported values are show in Figure 3 and M-mode measurements are shown in Figure 4. 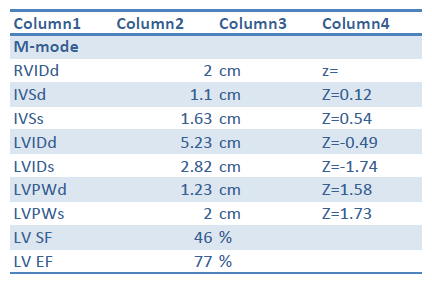 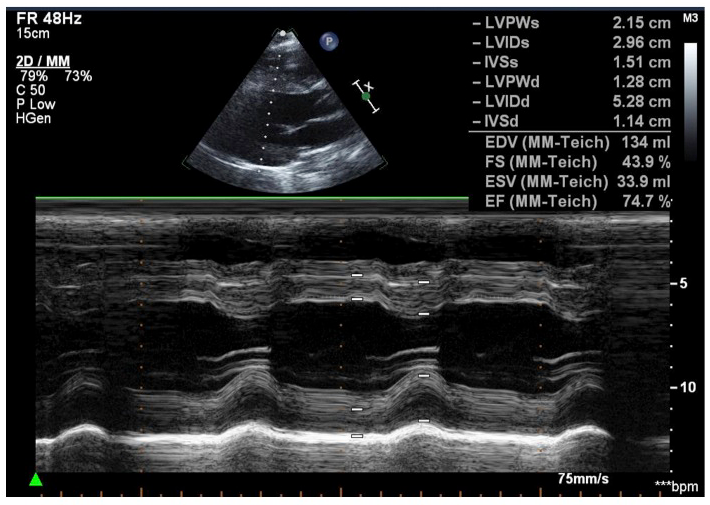 At this point, which of the following is the most appropriate next step in diagnosis/treatment?

The correct answer is: H. Options D and G are both correct.

Given his arrest, he underwent right and left heart catheterization and electrophysiology study, both of which were unremarkable. In particular, he had normal coronary artery origins and angiography, and he had no inducible arrhythmias. A right heart biopsy was taken and later returned as normal.

A cardiac MRI revealed septal wall thickness of 14 mm and late gadolinium enhancement was identified in the inferior and apical walls. These features are consistent with hypertrophic cardiomyopathy with myocardial fibrosis.

This case highlights the importance of having a plan for management of sudden cardiac arrest. This player's ECG and echocardiogram are abnormal and consistent with hypertrophic cardiomyopathy, although prior to the arrest, his echocardiogram may have been seen as being consistent with "athlete's heart." Additionally, myocarditis and illicit drug use may have been clinically undetected as possible inciting events for sudden cardiac death.

This case illustrates the critical importance of being prepared for the undiagnosed patient at risk for sudden death. We know many patients have conditions that can predispose to sudden cardiac arrest. Some of these conditions, such as commotio cordis, are not detectable prior to the catastrophic event regardless of pre-participation efforts. Therefore, a plan for how to handle sudden cardiac arrest events, education on immediate CPR, and rapid access to AEDs is critical for all those who manage and care for athletes. This patient survived in large part to the first response by his coach until the AED was available. Ready availability of coaches and athletic trainers that can perform CPR and use AEDs on site are essential to limit the rare, but potentially tragic, impact of cases like this.

This patient was restricted from returning to play. His primary cardiologist placed an implantable cardioverter defibrillator (ICD) for secondary prevention of sudden cardiac death.

YOU ARE HERE: Home > Education and Meetings > A 17-Year-Old Male Athlete Loses Consciousness and Becomes Apneic While Playing Basketball