A 54-year-old man presented by ambulance to the emergency department with several hours of severe substernal chest pain at rest. Prior to presentation, he was physically active, had no history of cardiovascular disease, and took no medications. However, he had recently been diagnosed with stage 3 prostate cancer and had been scheduled for radical prostatectomy in 3 months. At the time of arrival, the patient had received aspirin 325 mg and several doses of sublingual nitroglycerin without pain relief. His initial vital signs showed a heart rate of 64 bpm, blood pressure of 91/67 mmHg, respiratory rate of 18 breaths per minute, and oxygen saturation of 100% on room air. Physical examination was unremarkable. The patient's electrocardiogram showed sinus rhythm with small Q waves in leads III and aVF with T-wave inversions in leads II, III, and aVF and ST depressions in V5 and V6 (Figure 1).

The basic metabolic panel and complete blood count were within normal limits. A point-of-care troponin I level was elevated at 1.8 ng/mL (normal ≤ 0.06 ng/mL). The patient was treated with clopidogrel 600 mg and a heparin infusion. He was then transferred to the cardiac catheterization laboratory where coronary angiography was performed that revealed a right dominant system with an 80% stenosis of the proximal right coronary artery and a 90% hazy lesion in the mid-right coronary artery (Figure 2). The left coronary system had mild luminal irregularities only. 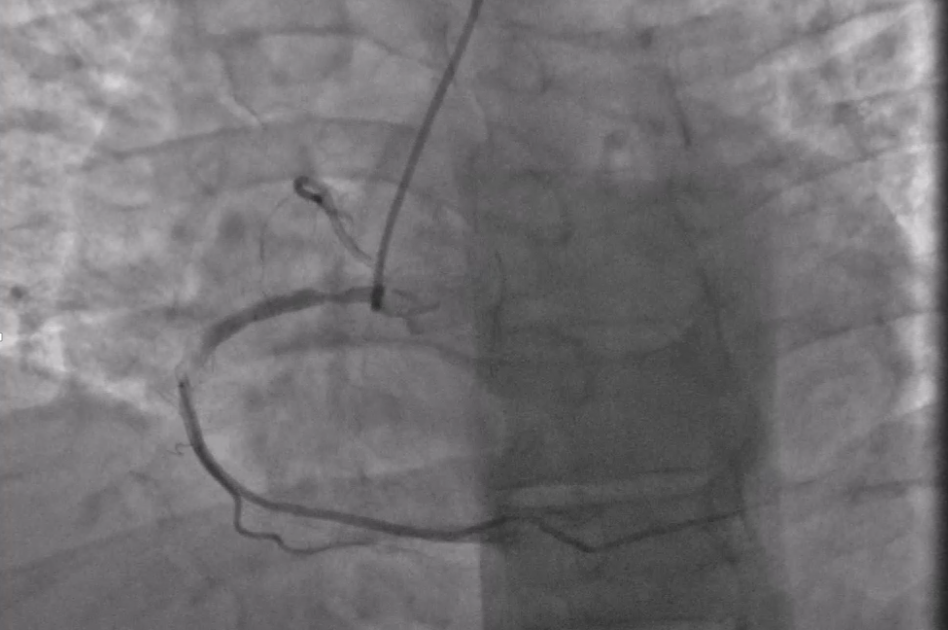 What is the best management of this patient, bearing in mind the need for non-cardiac surgery in the near future?

The question of the appropriate management of an acute coronary syndrome in the context of an urgent, but not emergent, non-cardiac surgery is a complex one and requires an individualized approach. To make an informed decision, however, it is crucial to understand all of the options available and their future impact on perioperative management.

Pursuing medical management alone has the benefit of obviating the risk of a stent thrombosis during perioperative discontinuation of antiplatelet therapy. However, with high-risk GRACE and TIMI risk scores and ongoing chest pain, the patient in the vignette would be at substantial risk for early morbidity and mortality in the acute setting. Additionally, unlike patients with stable ischemic heart disease, early revascularization in patients with an acute coronary syndrome has been shown to reduce the risk of death or reinfarction.1 Although non-cardiac surgery is not frequently performed on the unrevascularized patient with a recent myocardial infarction (MI), one large analysis showed a significant time-dependent risk in these patients, both for recurrent MI and 30-day mortality (estimated at 32.8 and 14.2%, respectively, when surgery is performed 0-30 days after MI, compared with 5.9 and 9.9% when surgery is performed greater than 90 days after MI).2 This risk is potentially mitigated with revascularization.3 Therefore, the risk of medically managing an MI and then proceeding to non-cardiac surgery without revascularization appears to be substantial in this patient.

Coronary artery bypass grafting may have the benefit of providing full revascularization without the need for long-term dual antiplatelet therapy (DAPT) but involves the early hazard of a major surgery. In our patient's case in particular, performing bypass surgery for single-vessel non-left anterior descending artery or left main disease has not been shown to have a long-term benefit on mortality and indeed may be associated with upfront harm.4

As such, the choice of revascularization falls between BMS and DES. As a general rule, DES placement maintains the benefits of BMS over balloon angioplasty in terms of preventing acute vessel recoil and dissection while addressing the shortfalls of BMS, specifically the risk of target-lesion revascularization due to restenosis from neointimal tissue growth.5 Prior observational studies with first-generation DES have shown a significant increase in MI, stent thrombosis, and death after non-cardiac surgery. However, current stent designs have undergone significant changes. The second-generation DES have thinner struts and thinner and more biocompatible polymer, both of which reduce the risk of restenosis and stent thrombosis. Moreover, the fluoropolymer on the everolimus-eluting stent has been shown to be thromboresistant. As such, in a meta-analysis including over 258,000 patient-years of follow-up, cobalt-chromium everolimus-eluting DES had significantly lower rates of not only target-vessel revascularization but also MI, stent thrombosis, and even death than BMS.6

However, these data may not be directly applicable to the patient discontinuing DAPT (but continuing aspirin monotherapy) earlier than the recommended duration. In a propensity-matched analysis of patients undergoing non-cardiac surgery less than 1 year after coronary stent placement (6,500 of whom underwent first-generation DES placement and 1,800 of whom underwent BMS placement), there were significantly fewer instances of death or MI in the DES group at 30 days post-surgery compared with the BMS group (odds ratio 0.74; 95% confidence interval, 0.58-0.94; p = 0.01).7 When stratified by the timing of surgery in relation to stent placement, the benefit for DES occurred exclusively in patients undergoing surgery more than 90 days after stent placement; there was no significant difference between DES and BMS before 90 days. There is now a randomized trial that has compared the outcomes of DES versus BMS in high-risk patients, including those undergoing non-cardiac surgery. ZEUS (Zotarolimus-eluting Endeavor Sprint Stent in Uncertain DES Candidates [ZEUS] Study) compared zotarolimus-eluting DES to BMS in patients in whom BMS might be particularly considered, such as patients at low risk for restenosis, high risk for in-stent thrombosis, or high risk for bleeding.8 This trial included patients undergoing non-cardiac surgery and hence is highly relevant to the management of our patient. The median duration of DAPT use in the trial for both the DES and BMS arms was 1 month, followed by aspirin alone. The investigators found that the primary endpoint (a composite of death, MI, or target-vessel revascularization) was significantly lower in the DES group than the BMS group (hazard ratio 0.76; 95% confidence interval, 0.61-0.95; p = 0.011), with no evidence of heterogeneity by subgroup. In addition, there was a significantly lower risk of stent thrombosis with DES compared with BMS.

Thus, the available evidence suggests that DES (particularly second generation DES) are superior to BMS in terms of safety and efficacy, even in patients who must discontinue DAPT early for non-cardiac surgery. This stands in contraposition to the current 2011 American College of Cardiology/American Heart Association guidelines, which recommend balloon angioplasty or BMS followed by 4-6 weeks of DAPT in patients who require percutaneous coronary intervention but are scheduled for elective non-cardiac surgery in the subsequent 12 months.9 The more recent 2016 American College of Cardiology/American Heart Association guidelines on duration of DAPT make no comment on the preferred mode of revascularization prior to elective non-cardiac surgery.10 However, in patients with a recently implanted DES who require non-cardiac surgery, a class I recommendation is given to continue DAPT for 6 months prior to surgery, and a class IIb recommendation is given to consider shortening the duration to 3 months if the delay in surgery is considered more hazardous than the increased risk for stent thrombosis. Recommendations from the European Society of Cardiology also make note that DAPT duration can be shortened to <6 months in patients at high bleeding risk.11 In light of these discrepancies, and to better guide the practitioner, harmonization of these guidelines, including the experience with second-generation DES as cited above, should be considered.

The patient in the vignette underwent uncomplicated placement of three cobalt-chromium everolimus-eluting DES in the proximal-to-mid-right coronary artery and was discharged in stable condition on DAPT. Three months later, he underwent uncomplicated curative radical prostatectomy with temporary discontinuation of his clopidogrel while continuing aspirin through the perioperative period. He continues to follow up in the outpatient setting.

YOU ARE HERE: Home > Education and Meetings > A 54-Year-Old Man With an NSTEMI and Upcoming Non-Cardiac Surgery