A 59-year-old woman with a history of metastatic KRAS-positive rectal cancer with metastatic lung disease and progression of two prominent lung nodules presented for consultation for an abnormal restaging computed tomography scan of the thorax incidentally showing left ventricular (LV) and aortic thrombi (Figures 1 and 2). Her current medications were extended-release morphine, zolpidem, and mirtazapine. Her chemotherapeutic regime included capecitabine (1000 mg bid with 2 weeks on and 1 week off), which she started 9 months prior to presentation, and bevacizumab (7.5 mg weekly), which she started 5 months prior. She was initially diagnosed with rectal cancer in 2008 and had received prior surgery, chemotherapy, and radiation (right and left lung). 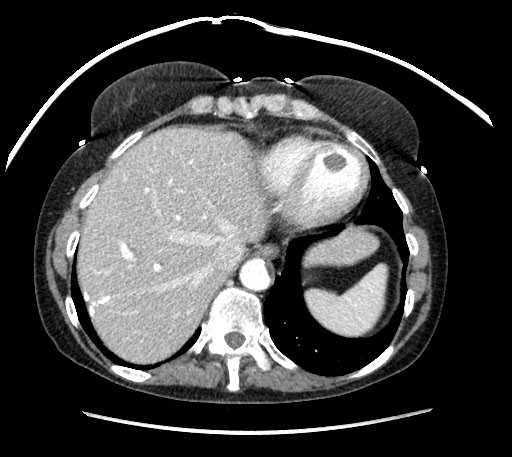 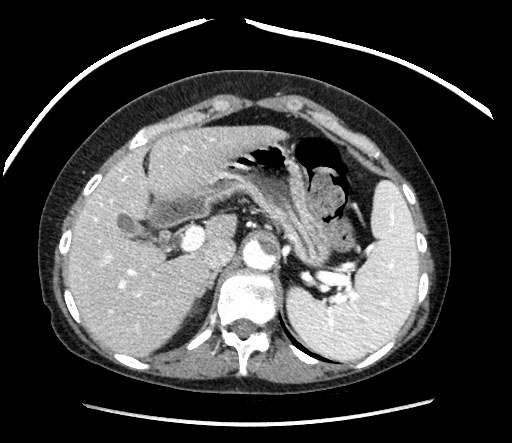 She was asymptomatic with no symptoms of chest pain, shortness of breath, or systemic emboli. On physical exam, blood pressure was 130/90 mmHg and pulse rate was 76 bpm. Her exam was unremarkable with a well-nourished appearing woman in no acute distress. She had no jugular venous distention and normal S1 and S2 with no murmurs, rubs, clicks, or gallops. Her lungs were clear, there was no abdominal pain, and her extremities showed no edema or cyanosis. Her distal pulses were normal, and the complete metabolic profile and complete blood count were normal. A prior electrocardiogram showed normal sinus rhythm and was within normal limits (Figure 3). 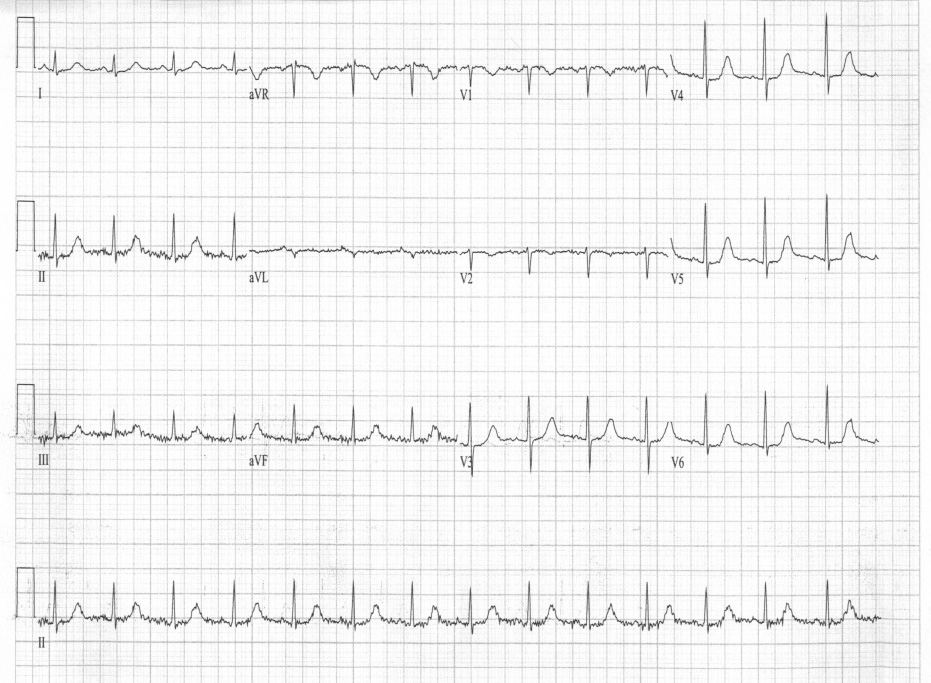 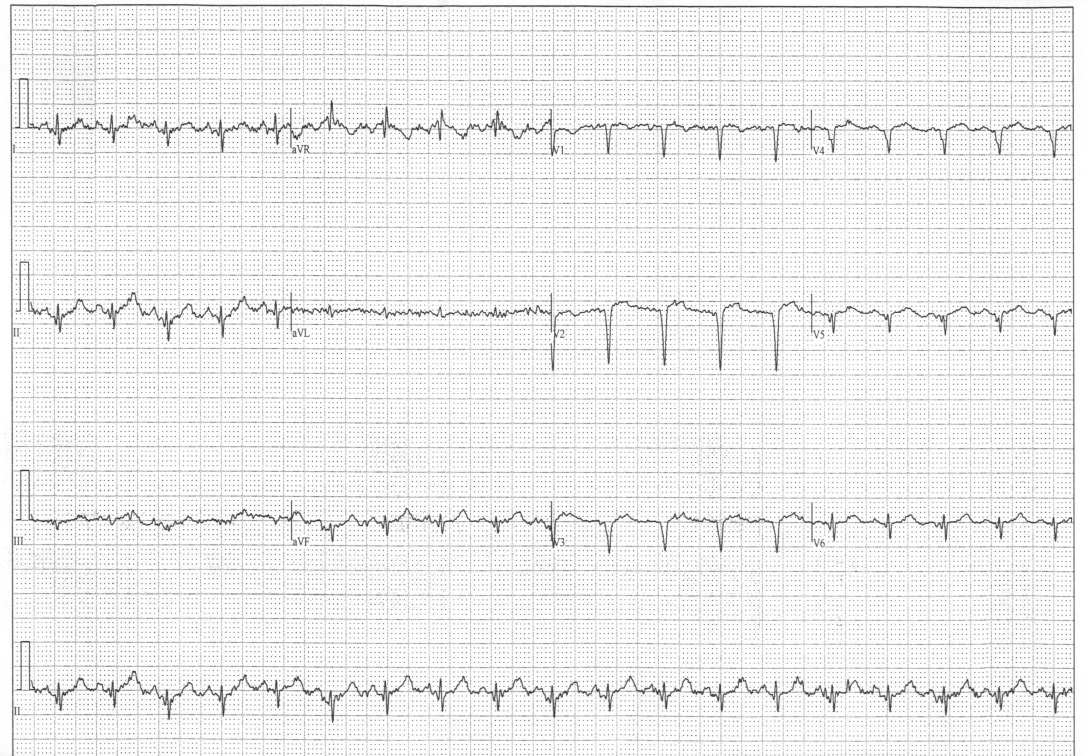 What is the most validated option for additional therapy for this patient?

The correct answer is: D. Answers B & C

Our conclusion was that the patient suffered an arterial thrombotic event in her left anterior descending coronary artery, resulting in a transmural infarction. The patient was left with an apical wall motion abnormality and a large apical thrombus. The thrombi noted in the aorta may have been embolic or formed in situ.

Bevacizumab, a humanized monoclonal antibody against vascular endothelial growth factor (VGEF), in addition to chemotherapy improves survival of patients with various metastatic carcinomas.1 Unfortunately, bevacizumab treatment is associated with a significant increase in the risk of arterial thrombotic events.2,3 The absolute rate of developing an arterial thrombotic event is reported as 5.5 events per 100 person-years for those receiving combination therapies of bevacizumab and chemotherapy.2 MI due to bevacizumab has also been reported.2,3,4

The mechanism of arterial thrombotic events and MI associated with bevacizumab is likely multifactorial. These effects could be downstream consequences of suppression of cellular signaling pathways important in the regulation and maintenance of the microvasculature. Decreased regulation of these pathways in normal organs can lead to vascular disturbances and even regression of blood vessels.5,6 The role of VEGF in endothelial cell maintenance and function is under research, and the use of anti-VEGF therapies is implicated as a contributing factor to arterial thrombotic events.7,8 VEGF is known to contribute to endothelial cell function and maintenance of vascular integrity. Inhibition of VGEF may diminish the regenerative ability of the vascular endothelium and expose procoagulant phospholipids, leading to platelet activation and activation of the coagulation cascade.9 In addition, VEGF increases production of vasodilatory prostaglandins and nitric oxide. Reduced production of these cytokines is likely to increase the risk of thrombosis.

This procoagulant effect, coupled with stasis in the anteroapical portion of the ventricle from the prior infarct in that area, likely contributed to the development of the anteroapical thrombus.

The recommendation of any grade of arterial thromboembolic event with bevacizumab is discontinuation.10,11 Because she had LV apical thrombosis, we felt the risk of further embolization and possible stroke was high. We subsequently placed her on enoxaparin 1 mg/kg subcutaneous every 12 hours. Warfarin was avoided because of her concomitant use of capecitabine, which is known to significantly interact with all coumarin derivative anticoagulant agents and potentially lead to fatal bleeding in patients with or without liver metastases.10

The decision to stop bevacizumab was supported by our cardio-oncology multidisciplinary team. Addition of bevacizumab to chemotherapy increases overall survival compared with chemotherapy alone, both in first line as well as in continuation beyond first progression.12 However, we felt that with the size and number of arterial thrombi, the risk-benefit ratio fell in favor of discontinuing the bevacizumab. The patient was subsequently initiated on irinotecan therapy in combination with capecitabine as continued palliative treatment of her metastatic rectal cancer.

YOU ARE HERE: Home > Education and Meetings > A 59-Year-Old Woman With Rectal Carcinoma: Cardiovascular Considerations of Oncologic Therapy