A 78-year-old Caucasian man presents with a history of atrial fibrillation on anticoagulation with an oral direct antithrombin inhibitor, heart failure with preserved ejection fraction (HFpEF) of 50% hypertension, dyslipidemia, and obesity (BMI = 32 kg/m2).

He was hospitalized two weeks ago due to heart failure exacerbation. He was treated with intravenous diuresis that improved his hypoxemia, dyspnea, and peripheral edema; however, respiratory assessment during hospitalization showed an asymptomatic on-and-off tachypnea (Figure 1). He was discharged on optimal medical therapy as per guidelines including metoprolol, dabigatran, lisinopril, atorvastatin, furosemide, spironolactone, digoxin, and insulin subcutaneous with plan for follow-up as an outpatient.

Last week, he was evaluated by his primary physician at the outpatient clinic. He reported no signs of heart failure decompensation. He complained of daytime fatigue and nonrestorative sleep. His primary physician recommended an overnight oximetry, which was completed two nights ago (Figure 2). Unfortunately, today he developed acute shortness of breath that leads him to the emergency department.

This hospitalization represents the third one in the last six months. He reports dyspnea at rest and worsening bilateral lower extremity edema. His vital signs are heart rate of 115 beats per minute, irregularly irregular pulse, respiratory rate of 24 breaths per minutes, blood pressure of 105/76 mm Hg, and oxyhemoglobin saturation of 85% at room air.

Which of the following statements is TRUE regarding sleep apnea in heart failure?

The correct answer is: C. Untreated sleep-disordered breathing has been associated with a higher number of readmissions.

CSR-CSA is characterized by a cyclic breathing pattern that alternates episode of apnea followed by a crescendo-decrescendo tachypnea/hypernea.2 It is believed that ventilatory control dysregulation due to an exaggerated response to CO2 plus prolonged brain-lung circulation time is the underlying cause of CSR. Sleep-disordered breathing is highly prevalent in heart failure patients.3,4 and central sleep apnea can represent close to half of those cases.5 Central sleep apnea in HF patients has been associated with poor outcomes6,7 in some, but not all, studies.

The first treatment of CSR-CSA in the setting of HF is optimization of pharmacotherapy. Persistent disordered breathing with symptoms might warrant positive airway pressure therapy. As opposed to its efficacy in obstructive sleep apnea (OSA), continuous positive airway pressure (CPAP)8 is typically effective in a minority of patients with CSR-CSA. Adaptive servo ventilation (ASV), on the other hand, has been associated with better control of CSR-CSA and improved treatment compliance,9 though the results of multicenter trials are awaited. Treatment of Predominant Central Sleep Apnoea by Adaptive Servo Ventilation in Patients With Heart Failure (Serve-HF) and Effect of Adaptive Servo Ventilation (ASV) on Survival and Hospital Admissions in Heart Failure (ADVENT-HF) are large prospective randomized controlled trails that are evaluating the magnitude of the effect of treatment with ASV in heart failure patients.

Recently, Khay at et al. evaluated the impact of central sleep apnea as a predictor of cardiac readmission in hospitalized patients. This prospective study followed, for up to six months, 165 patients with CSA from a cohort of 784 heart failure patients. After adjustment of cofounding variables, it was concluded than CSA represented an increased risk for hospital readmission with an odds ratio of 1.53 (95% confidence interval [CI] 1.1-2.2; p = 0.03) when compared with heart failure without sleep-disordered breathing.10 Furthermore, there was a suggestion of increased mortality associated with sleep-disordered breathing with follow-up for up to three years.11

In this patient, a split-night polysomnography study confirmed the diagnosis of CSR-CSA (Figure 3). CPAP was ineffective to control his sleep-disordered breathing and ASV showed complete control of central sleep apnea (Figure 4). Therefore, the patient was prescribed ASV. 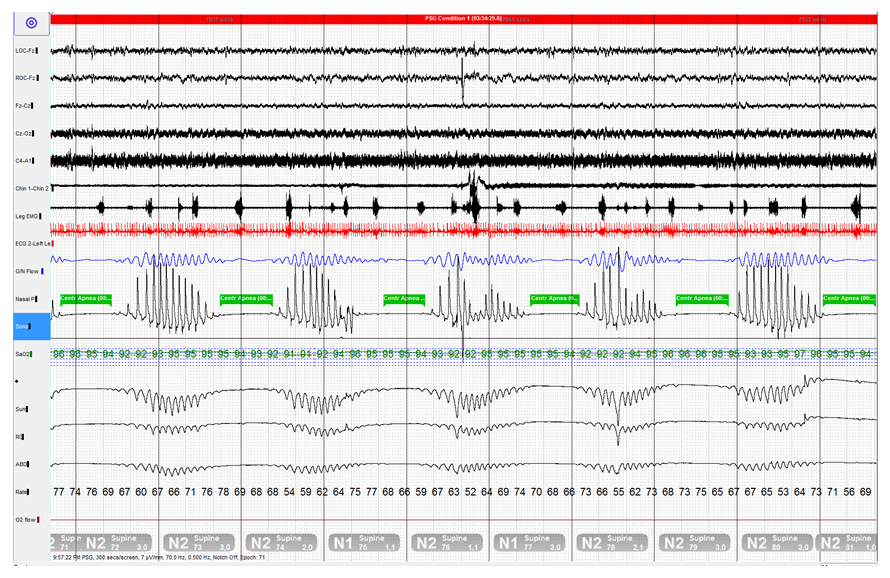 Nocturnal oxygen therapy along with optimal medical therapy for heart failure showed improvement in patients' quality of life (QOL), and left ventricular function. However, there were no changes in clinical outcome when compared with a control group receiving heart failure standard therapy alone.12,13 When compared to positive airway pressure, nocturnal oxygen was inferior as a means to improve the apnea hypopnea index.14 Current practice guidelines recommend nocturnal oxygen therapy for those patients with central sleep apnea related to chronic heart failure who are unable to comply with CPAP therapy15 and not as an initial therapeutic option, rendering answer option A the wrong answer.

Finally, head elevation has been used as a temporary measure in the postsurgical care of OSA patients.16 The rationale of this approach is based on the attenuation of gravity effect on soft tissues that obstruct the airway. It's unlikely that such an intervention would impact this patient's condition.

YOU ARE HERE: Home > Education and Meetings > A Heart Failure Patient With Recurrent Admissions to the Hospital for Unrecognized Hypoxic Episodes of Central Sleep Apnea | Patient Case Quiz