An Unusual Case of Cardiac Arrest

A 67-year-old man is transferred to our institution from an outside facility after suffering a witnessed cardiac arrest at home. He has a medical history of hypertension, dyslipidemia, coronary atherosclerosis, prior inferior non-ST-segment elevation myocardial infarction, and sick sinus syndrome post dual-chamber pacemaker implantation.

The patient initially reported sudden onset of chest pain described as "a brick on my chest" and collapsed a few minutes later. He was resuscitated promptly by his son. Upon arrival of emergency medical services, he was found to be in ventricular fibrillation. A 200 J asynchronous shock was delivered, after which he developed pulseless electrical activity. Return of spontaneous circulation was achieved after a total of 28 minutes of appropriate cardiopulmonary resuscitation. The patient arrived comatose at an outside facility approximately 35-40 minutes after losing consciousness. An electrocardiogram was obtained and is shown in Figure 1. His laboratory results were consistent with mild lactic acidosis (lactic acid = 3.6 mmol/L), normal renal function, and a cardiac troponin I level of 0.035 ng/mL. A limited transthoracic echocardiogram showed no significant wall motion abnormalities, no significant valvular lesion, and a new small pericardial effusion. The patient was emergently transferred to the cardiac catheterization laboratory at our hospital. Coronary angiograms of his left and right coronary artery are shown in Videos 1 and 2, respectively.

Electrocardiogram obtained after the return of spontaneous circulation.

Coronary angiogram of the left coronary artery from a right anterior oblique view with cranial angulation. There is mild non-obstructive coronary disease of the left anterior descending artery.

Coronary angiogram of the right coronary artery from an anteroposterior view with cranial angulation. Note the significant ostial posterior descending artery lesion without the presence of thrombus and Thrombolysis in Myocardial Infarction 3 flow throughout the vessel.

Based on the clinical history and diagnostic tests described, what would be the next best step in the management of this patient?

The patient presented with an out-of-hospital cardiac arrest. Although the first detectable rhythm was ventricular fibrillation, his clinical course and the diagnostic testing were not consistent with an acute coronary syndrome. Specifically, the electrocardiogram did not reveal major ischemic changes, the bedside echocardiogram showed no wall motion abnormalities, and the cardiac troponin I level was not elevated. Cardiac catheterization demonstrated non-obstructive disease of the left coronary artery system and a significant ostial posterior descending artery lesion. However, it is unlikely that this lesion could account for the patient's clinical presentation. Proceeding with PCI of this lesion would not be beneficial and could be potentially harmful if other serious conditions, such as aortic dissection, were not ruled out. The initial echocardiogram showed a new small pericardial effusion, which should raise the suspicion for acute type A aortic dissection. Therefore, starting therapy with antiplatelet agents and anticoagulants is contraindicated. In addition, although hypothermia should be considered in every post cardiac arrest patient, transferring the patient to the intensive care unit without establishing a diagnosis is not recommended. Despite the presence of a pericardial effusion, the diagnosis of cardiac tamponade has not been established. Furthermore, in hemodynamically stable patients with suspected type A aortic dissection, pericardiocentesis is not safe and should be avoided. The correct answer in this case is that additional diagnostic imaging is required.

Indeed, an aortogram was performed that demonstrated a type A aortic dissection with a short dissection flap just above the ostium of the left main coronary artery (Video 3). An emergent transesophageal echocardiogram was concerning for type A dissection, with a short dissection flap and thickened posterior aortic wall; no significant aortic regurgitation or compromise of the right coronary ostium were observed (Video 4). The transgastric views showed a small hemopericardium anteriorly (Video 5). Emergency surgical consultation was requested, and computed tomography with dissection protocol was obtained for surgical planning. The study confirmed the diagnosis of type A aortic dissection involving only a short segment of the proximal ascending aorta (Figures 2 and 3 and Video 6). Unfortunately, the patient suffered a second cardiac arrest and expired prior to being transferred to the operating room.

Transesophageal echocardiogram showing a long axis view of the aortic valve and the aortic root. A faint dissection flap with independent motion is visualized. The aortic valve and the ostium of the right coronary artery appear intact. Note the thickened posterior wall of the ascending aorta just above the sinotubular junction, concerning for intramural hematoma.

Transgastric view of the short axis of the tricuspid valve. Note the small hemopericardium anteriorly and the patent ostial and proximal right coronary artery. 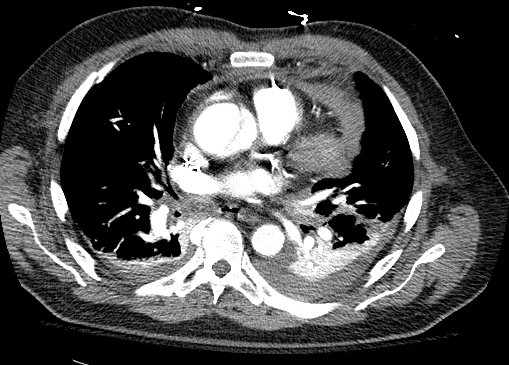 Axial view of the computed tomography with intravenous contrast showing the dissection flap at the level of the sinotubular junction.

Coronal view of the computed tomography with intravenous contrast demonstrating a short dissection flap just above the sinotubular junction.

Serial axial images of the computed tomography with intravenous contrast showing the dissection flap limited to the proximal ascending aorta and the aortic root. Note that the flap extends from the intramural hematoma of the posterior wall of the proximal ascending aorta just above the sinotubular junction leftwards and lower towards the left coronary cusp. There is contrast extravasation into the left and right pleural spaces (more pronounced to the left) and pericardial effusion, probably hemopericardium.

Although there is a Class I American College of Cardiology and American Heart Association recommendation for comatose patients who have experienced cardiac arrest due to underlying ST-segment elevation myocardial infarction to undergo emergent cardiac catheterization with the intent of primary PCI, there are no specific recommendations for comatose patients without ST-segment elevation myocardial infarction who survived a cardiac arrest. An unwitnessed arrest, the presence of severe lactic acidosis, advanced age, end stage renal disease, traumatic etiology, and cardiopulmonary resuscitation greater than 30 minutes before return of spontaneous circulation are poor prognostic factors. However, the presence of a culprit coronary lesion is identified in about one third of hospital cardiac arrest patients without ST-segment elevation myocardial infarction.1 Therefore, it is not unreasonable to proceed with urgent diagnostic cardiac catheterization, particularly in the absence of poor prognostic factors. A recent algorithm for the management of the resuscitated comatose patient was developed and published last year.2

Both type A and type B aortic dissections can present infrequently as cardiac arrest. The initial rhythm is usually pulseless electrical activity due to blood exsanguination or cardiac tamponade. Ventricular fibrillation is less commonly seen and is probably secondary to ischemia from coronary obstruction or intermittent obstruction of the left main coronary ostium with a dissection flap, as probably is the case in this patient. The majority of these patients do not experience return of spontaneous circulation despite resuscitative efforts.3

In summary, aortic dissection is a rare cause of out-of-hospital cardiac arrest. Its presence should be considered if the diagnostic workup is not conclusive or when there are supportive clinical or laboratory data such as history of acute onset of severe chest or back pain just before the cardiorespiratory collapse, a new diastolic murmur on cardiac auscultation, wide mediastinum on chest X-ray, significantly elevated D-dimer levels, or the presence of a new pericardial or pleural effusion. Unfortunately, the prognosis of this condition remains poor.

YOU ARE HERE: Home > Education and Meetings > An Unusual Case of Cardiac Arrest