A 46-year-old male with a history of hypertension and hyperlipidemia presented to the emergency department with "stabbing chest pain." He was found to be in atrial fibrillation with rapid ventricular response. No imaging was performed, but he was started on sotalol and rivaroxaban. He was discharged but presented again three days later with fatigue and continued chest pain. He was found to be significantly bradycardic; thus, sotalol was discontinued, and a combination of flecainide and diltiazem were started. Two weeks after this, he again presented with continued, worsening chest pain. Coronary angiography was reportedly normal. Computed tomography of the chest, abdomen, and pelvis was performed after this, which showed a pericardial effusion; inflammatory markers were checked and were found to be significantly elevated. A diagnosis of pericarditis was made. He was transferred to our center for evaluation of the same. On arrival, he was tachycardic, with a heart rate of 114, with jugular venous distension to the angle of the mandible, trace peripheral edema, and an audible pericardial "knock." Renal function was normal, hemoglobin was normal, c-reactive protein was elevated at 79mg/L, erythrocyte sedimentation rate was elevated at 42mm/hr, brain natriuretic peptide was 435pg/mL, and troponins were negative. Rheumatologic evaluation was unrevealing. His presenting electrocardiogram showed atrial flutter (Figure 1). Magnetic resonance imaging (Figures 2 and 3) showed a moderate, circumferential pericardial effusion, thickening of the visceral and parietal pericardial layers, and circumferential increased pericardial signal intensity. 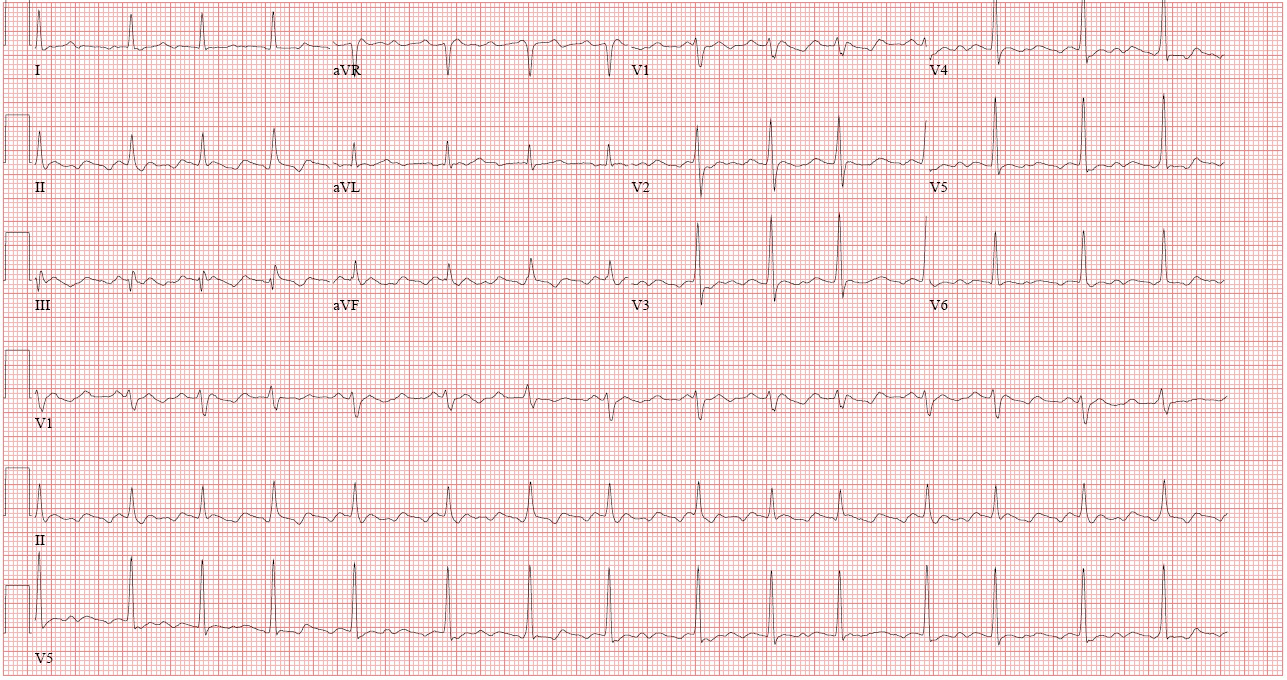 The patient was started on prednisone 60mg daily, ibuprofen 600mg thrice daily, and colchicine 0.6mg thrice daily with some relief of his pain; however, his atrial fibrillation persisted with rates maintained in the low 100s despite maximal doses of metoprolol. He had tolerated anticoagulation with intravenous heparin with no bleeding or change in hemoglobin.

How should his anticoagulation be managed at discharge?

The correct answer is: B. Aspirin alone

Early case series of patients with acute pericarditis showed that these patients sometimes developed atrial arrhythmias, including atrial fibrillation1,2, an observation supported by a more recent study3. In these, incidence ranged from 4-7 percent.

Interestingly, no American guidelines address the question of anticoagulation in pericarditis-induced atrial fibrillation. Recently released European guidelines indicate that use of oral anticoagulants is a minor predictor of a poor prognosis. Their recommendations include avoiding anticoagulation in patients with uremic or iatrogenic pericarditis but indicate that anticoagulation may be considered in other patients with acute pericarditis and atrial fibrillation.6 Based upon the available data, we tend to treat these patients with either aspirin or warfarin (depending on the patient's CHA2DS2-VASc score). As such, we placed this particular patient on high dose aspirin, using it as both an anticoagulant and an anti-inflammatory. In the year that we have been following him since his initial presentation, he has tolerated this well, without bleeding, and his effusion has resolved.