A 66-year-old man with five prior atrial fibrillation (AF) ablations was referred for electrophysiological evaluation following recurrent supraventricular tachycardia resulting in tachycardia-induced cardiomyopathy with an ejection fraction of 38%. After dofetilide failure, amiodarone suppressed the tachycardia, and his ejection fraction recovered to 60%. He discontinued amiodarone, fearing long-term side effects. An electrophysiological study was performed, and an atrial tachycardia with two distinct, alternating cycle lengths was easily induced with burst pacing (Figure 1). Attempted entrainment at one location in the left atrium is shown (Figure 2). Ablation at this location resulted in the tachycardia cycle length becoming fixed, and then the tachycardia terminated (Figure 3). 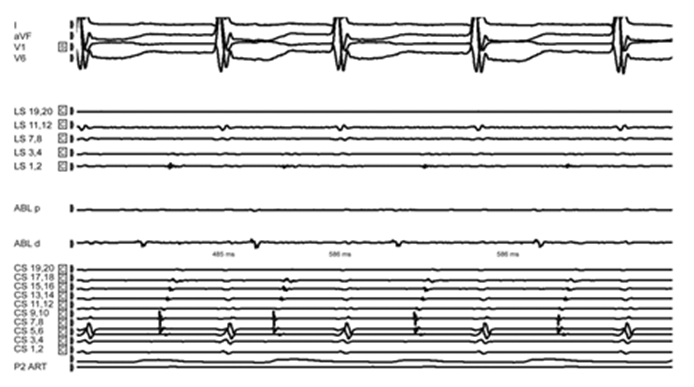 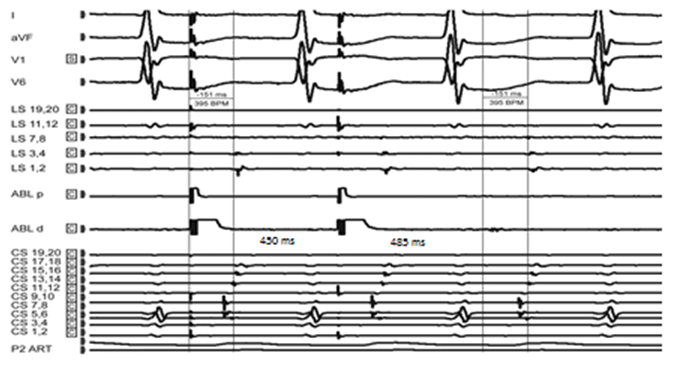 Attempted entrainment from the mapping catheter in the left atrium. As the surface P was diminutive, the time interval from stimulus (ablation distal pair electrodes) to LS 3,4 electrodes was measured. This is equal to the interval between the ablation distal electrogram to LS 3,4 electrogram during tachycardia. Post pacing interval while pacing at 450 ms was equal to the shorter of the two tachycardia cycle lengths (485 ms).

Which of the following statements describes the mechanism of tachycardia?

The correct answer is: C. Reentry with two different paths within critical isthmus.

Atrial fibrillation ablation has become a frequently performed procedure since ectopic sources, particularly those in the pulmonary veins, were found to produce AF.1 Although maintaining sinus rhythm is the goal of the procedure, atrial tachyarrhythmia occur after AF ablation and include recurrent atrial fibrillation, atypical atrial flutter and reentrant and nonreentrant focal atrial tachycardia.2,3

However, the attempted entrainment of the tachycardia in this patient suggested a likely mechanism.

In this patient, time measured from stimulus (pacing from the distal ablation electrodes) to a particular location of intracardiac electrogram was equal to time taken between the same electrodes during tachycardia. The post-pacing interval at this site was equal to the tachycardia cycle length and intracardiac electrograms during pacing suggested concealed fusion. The ratio of pacing site to surface P interval to tachycardia cycle length (shorter cycle length) could not be reliably assessed due to low amplitude P waves.