A 34-year-old previously healthy Hispanic woman presented to the emergency department with worsening left hip pain. Review of systems was significant for 15-pound weight loss, soaking night sweats, chills, and intermittent fevers over the past 3 months. On initial examination, she was hemodynamically stable and without focal clinical findings, with the exception of decreased breath sounds at the right base. Chest radiograph was significant for a large right lower lobe air space opacity (Figure 1). Computed tomography (CT) confirmed a cavitary lung mass; additional findings included a left ventricular (LV) filling defect consistent with an LV apical mass or thrombus (Figure 2), low density liver lesions, mediastinal lymphadenopathy, and a lytic left hip lesion highly concerning for metastatic neoplasm. Bronchoscopy and subcarinal lymph node biopsy demonstrated adenocarcinoma, which was presumed from a primary lung source. Transthoracic echocardiogram (TTE) (Figure 3) noted a spherical mass in the LV that appeared well-adherent to the apical aspect of the anterolateral wall in addition to an independently mobile echodensity adherent to this mass, which likely represented thrombus. 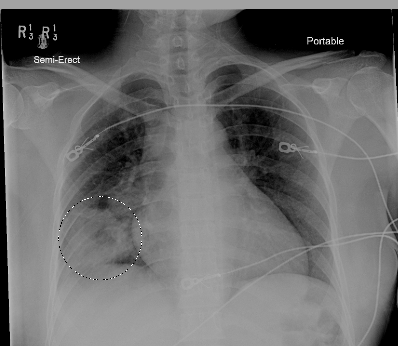 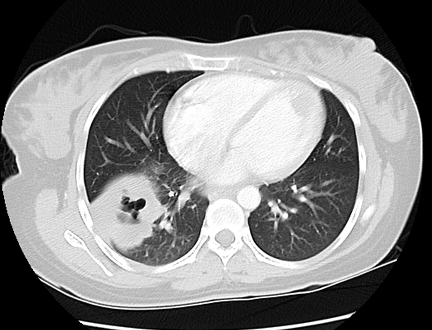 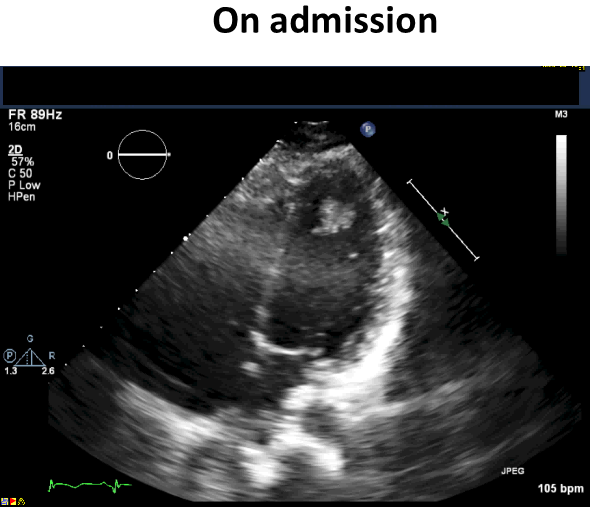 Mass appears to be at the apex but view is notably foreshortened. 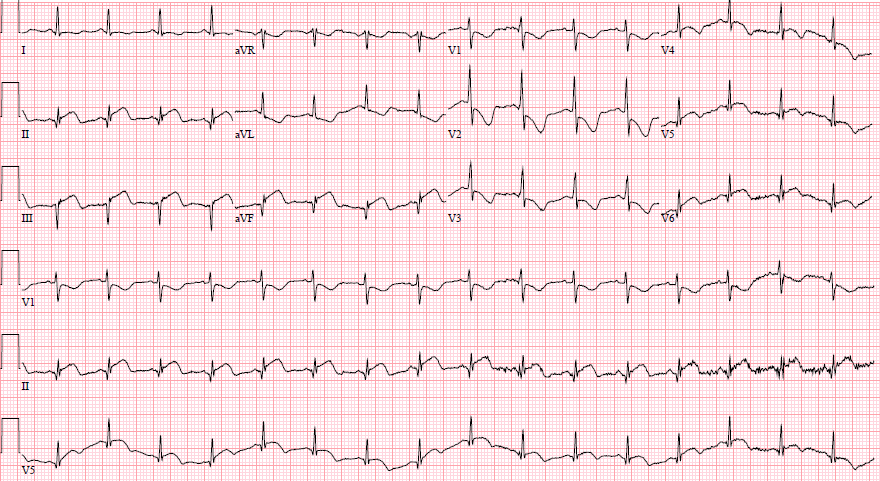 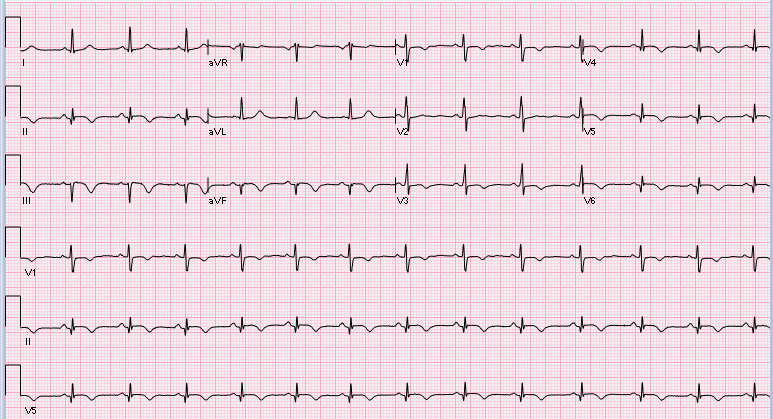 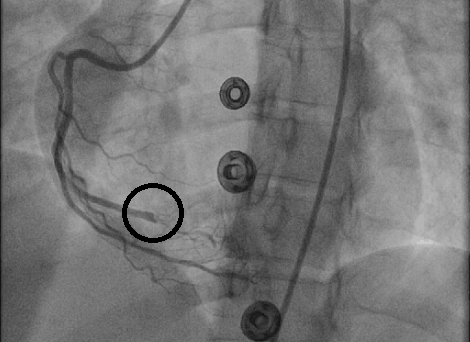 Based on the above coronary catheterization and clinical presentation, what is the likely etiology for the STEMI?

The correct answer is: C. Coronary embolism of thrombus or tumor

Given concern for coronary embolization, she received embolism aspiration, balloon angioplasty, and intracoronary eptifibatide with significant improvement in coronary flow (Figure 6). Pathology from the aspirated material showed organizing thrombus without evidence of tumor on cytology or staining (Figure 7). TTE showed stable LV systolic performance with inferior and posterior wall hypokinesis. Notably, the additional independently mobile echodensities adherent to the mass were no longer visualized on repeat echocardiogram (Figure 8). Subsequently, cardiac magnetic resonance imaging (CMRI) demonstrated a normal LV ejection fraction with inferoposterior hypokinesis and transmural delayed enhancement in the inferior-posterior wall consistent with prior infarction. Additionally, the CMRI demonstrated an LV mass adherent to the anterior LV wall, which took up contrast and appeared most consistent with tumor (Figure 9). 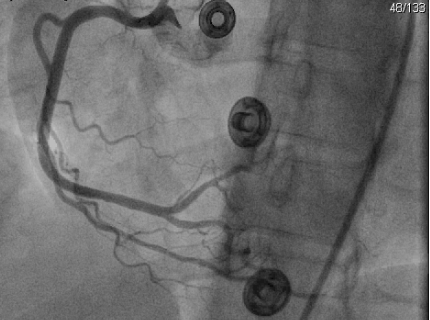 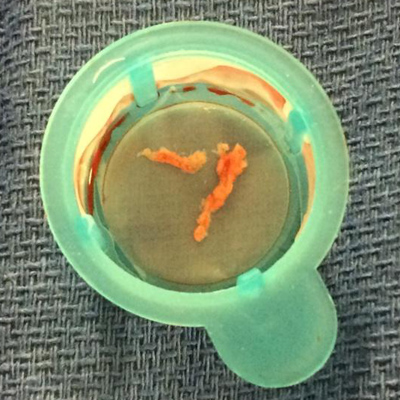 No thrombus on repeat TTE after myocardial infarction. 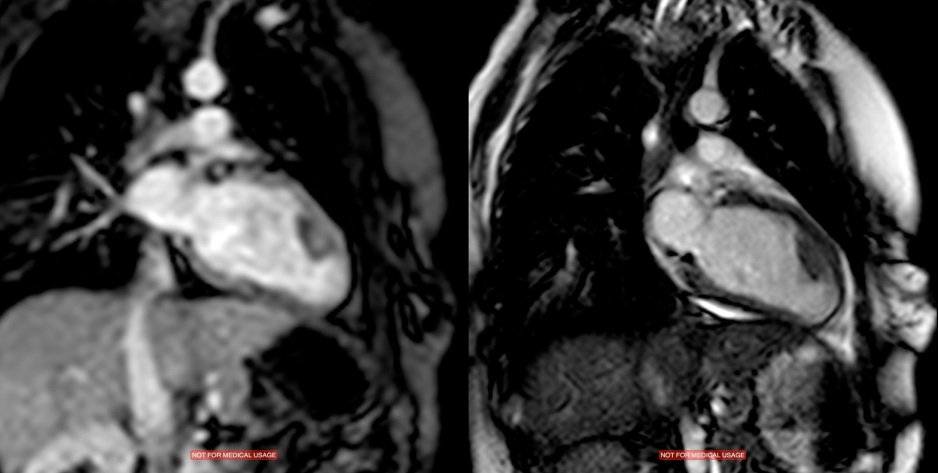 Similar to primary cardiac tumors, cardiac metastases can present in myriad and protean ways that can mimic valvular heart disease, systolic heart failure, ventricular or supraventricular heart rhythm disturbances, conduction defects, syncope, embolism or pericardial effusion.1 Given this diagnostic difficulty, it should not be surprising that the frequency of cardiac metastases is generally underestimated, and, in fact, cardiac metastases are found in up to 25% of post-mortem patients who died of malignancies.2,3 According to one study, two thirds of all cardiac metastases involved the pericardium (69.4%), about one third involved the epicardium (34.2%) or myocardium (31.8%), and only 5% involved the endocardium.4 Endocardial invasion is rare and typically involves invasion of the left atrium from lung cancer or invasion of the right atrium from vena caval tumor.5,6,7,8 In one case series, 97 cases of lung cancer were associated with cardiac metastases, of which 0% and 24.6% had endocardial and myocardial metastases, respectively.4 As such, there are few case reports of metastases to the LV endocardium.9 One case report noted ventricular thrombi leading to cerebral embolism and other complications including complete atrioventricular block and LV outflow tract obstruction.10

Here we present the case of an unfortunate young woman with widely metastatic lung adenocarcinoma including presumed metastasis to the anterior wall of the LV. The intracardiac metastasis was associated with intraventricular thrombus that seemingly caused STEMI by embolism down the right coronary distribution and was acutely treated with aspiration thrombectomy.

YOU ARE HERE: Home > Education and Meetings > Cancer: A Heart-Breaking Diagnosis