An 18-year-old white male recruited to play Division I collegiate football as a defensive tackle was flagged during pre-participation screening due to anterior T-wave inversions on electrocardiogram (ECG) and a family history of premature coronary artery disease. He has played competitive sports (hockey, football, and basketball) for most of his life. He has never experienced exertional chest pain or pressure, dyspnea, syncope, lightheadedness, or palpitations. He works out five times per week with a focus on power lifting and feels faster and stronger than others his size (6'5", 286 lbs.). There is no family history of sudden or unexplained death or hypertrophic cardiomyopathy. His maternal grandfather, a smoker and heavy drinker, suffered a myocardial infarction and died at the age of 49. Physical examination is normal.

The team physician recommended an exercise stress echocardiogram as the initial step to evaluate the abnormal ECG. Resting images revealed an ejection fraction (EF) of 65%, left ventricular (LV) hypertrophy with septal and posterior wall thickness of 13mm and 12mm, respectively, end diastolic LV internal diameter of 58mm, a normally tapering non-hypertrophied LV apex, normal diastolic function and minimal resting systolic anterior motion (SAM) of the subvalvular mitral valve (MV) apparatus (Video 1, 2). He exercised to 12.8 METS and 89% maximum predicted heart rate without symptoms and had a normal blood pressure response. He had appropriate LV augmentation but a peak left ventricular outflow track gradient (LVOT) of 57mmHg was noted. The study conclusion indicated the presence of hypertrophic cardiomyopathy (HCM) with dynamic obstruction and he was deemed ineligible for competitive football by the team's local cardiologist.

He was referred for a second opinion. A follow up ECG is shown in Figure 1. Cardiac MRI was performed revealing an EF of 60% with normal chamber size, maximal wall thickness of 12 at the mid-septum and no evidence of fibrosis or scarring (Figure 2). There were no premature ventricular contractions or alternative arrhythmias on a 24-hour Holter monitor. After review of the data, it was thought that findings were not suggestive of HCM but rather "athletic heart" and that he did not require sport disqualification. 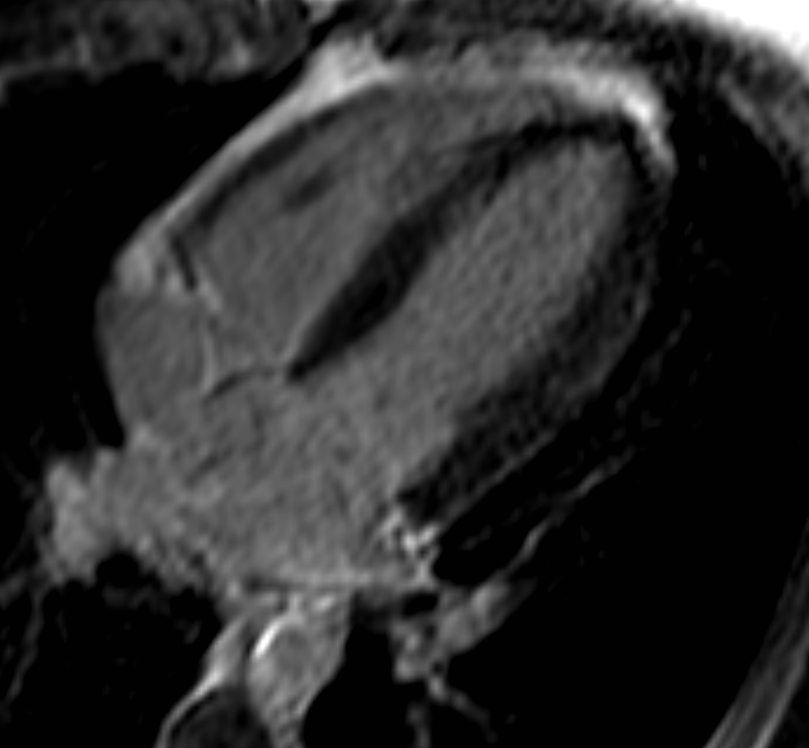 Due to conflicting opinions, he was next referred to a renowned academic HCM program where his evaluation started with a bicycle stress echocardiogram. He exercised for 12 minutes 43 seconds, 9 METS and 96% maximum predicated heart rate without symptoms or hemodynamic abnormalities. Exercise revealed severe SAM of the MV and chords, an LVOT gradient of 92mmHg at peak stress, but no increase in mitral regurgitation. Genetic testing was unrevealing. It was recommended that he de-train and be reassessed in six months.

The athlete and his parents were not satisfied with the explanations and conclusions that were drawn up to this point and wanted to be more engaged in the decision-making. They sought out a local cardiologist with an interest in sports cardiology and he recommended a cardiopulmonary exercise test (CPET) in hopes that it would provide more clarity to the diagnosis. The test was stopped early (11 minutes 13 seconds, RER 0.96) due to a failure of the O2 pulse to augment. The athlete did not report any symptoms and did not have any hemodynamic abnormalities. The CPET report documented a peak exercise capacity of 5.6 METS and peak VO2 of 45 % age and gender predicted with findings suggestive of an exercise induced fall in cardiac output. With multiple different opinions and test results, the patient and family are referred to an academic center with a sports cardiology program.

Which of the following is the best recommendation for this patient?

This young athlete's history and diagnostic testing led to incongruous findings. This patient was a young, asymptomatic athlete playing at a collegiate level without a family history of sudden death or cardiomyopathy who was flagged for an abnormal ECG during pre-participation screening. The repeat ECG, shown in Figure 1, would not be considered abnormal according to the most recent international recommendations.1 MRI demonstrated a maximal thickness of 12 mm at the mid-septum and did not have any findings consistent with HCM. Review of the stress echocardiogram revealed an intracavitary gradient without definitive findings of a LVOT gradient, which was also supported by the absence of an increase in mitral regurgitation suggesting that the SAM was subvalvular. Dynamic intracavitary gradients can be seen in young healthy athletes and are not diagnostic of HCM.2 However, during his initial CPET done elsewhere, he was noted to have a blunted O2 pulse response, a finding that suggested a limitation in stroke volume augmentation. Despite this, the patient noted that this CPET was terminated prior to his reaching maximal effort, and that he was asymptomatic throughout. Further, his low workload and measured exercise capacity during this initial CPET were inconsistent with prior exercise testing during which he was able to reach 12.8 METS.

While gradients and symptoms in HCM are dynamic, we felt that CPET findings were likely due to technical error and that this test should be repeated. Repeat CPET done in our lab showed normal heart rate and blood response to exercise, an excellent exercise capacity of 11.3 METS with peak VO2 of 39.5 mL/kg/min (142% predicted),3 and appropriate O2 pulse augmentation suggesting no limitation in stroke volume (Figure 3). While this athlete fell into the "gray zone," LV wall thickness of 10-13mm is commonly seen in strength athletes (e.g., football linemen), and assimilation of the data did not support a diagnosis of a pathologic cardiomyopathy. It was recommended that he return to play without restriction. He has been seen in follow up 8 months after initial evaluation and continues to be asymptomatic with normal EF and maximal wall thickness of 11mm on repeat echocardiogram. He will continue to undergo annual clinical surveillance and close follow up by his team's medical staff for the duration of his collegiate football career.

Panel A: Response patterns of heart rate (black) and oxygen pulse (VO2/HR, red) during exercise. Oxygen pulse is the product of cardiac stroke volume x peripheral oxygen extraction. Endurance training is associated with an increase in O2 pulse. The red hashed marks for this study depicted the 95-105% predicted values for oxygen pulse for someone of the same age, gender, height, and weight.
Panel B: Response patterns of oxygen uptake and carbon dioxide elimination are depicted in red and blue, respectively, (red hash marks depict 95-105% predicted peak VO2). When individuals surpass their anaerobic threshold carbon dioxide production begins to exceed oxygen uptake (the blue line crosses over the red line).

YOU ARE HERE: Home > Education and Meetings > A Collegiate Football Player With Left Ventricular Hypertrophy and an Intracavitary Gradient: Athletic Heart or Hypertrophic Cardiomyopathy?