A 65-year-old Caucasian female with past medical history significant for hypertension and a 47-pack-per-year smoking history presented to the hospital with an inferior ST-segment elevation myocardial infarction (STEMI). Coronary angiography revealed a thrombotic occlusion of the proximal right coronary artery (RCA) and 60% stenosis of the first obtuse marginal branch. Following balloon angioplasty, flow was successfully restored to the RCA, but the patient developed cardiogenic shock with bradycardia necessitating atropine and vasopressors with intra-aortic balloon pump support. After deployment of overlapping stents to the proximal and mid RCA, there was concern for dissection at the proximal as well as the distal stent edges. The patient underwent stenting of the RCA to the ostium, and a stent was deployed at the distal edge with restoration of Thrombolysis in Myocardial Infarction (TIMI) 3 flow. The patient was discharged home several days later with optimal medical therapy after an uneventful post-procedure course.

Six months later, she underwent a nuclear stress test due to progressive dyspnea on exertion, which revealed significant lateral ischemia and normal left ventricular function. She was subsequently referred for repeat coronary angiography, which revealed patent stents in the RCA and a focal 95% stenosis of the proximal portion of the obtuse marginal branch of the left circumflex artery (Figure 1 and Video 1). The first obtuse marginal lesion was then treated with balloon angioplasty using a 2.0 x 10 mm balloon with resultant TIMI 3 flow and good vessel expansion followed by subsequent placement of a 2.25 x 12 mm drug-eluting stent. After deployment of the stent, there was concern for coronary dissection distal to the stent, which persisted after a dose of 200 mcg of intra-coronary nitroglycerin (Figure 2 and Video 2). Despite some new chest pressure, the patient was hemodynamically stable with well-maintained blood pressures (130s/80s). 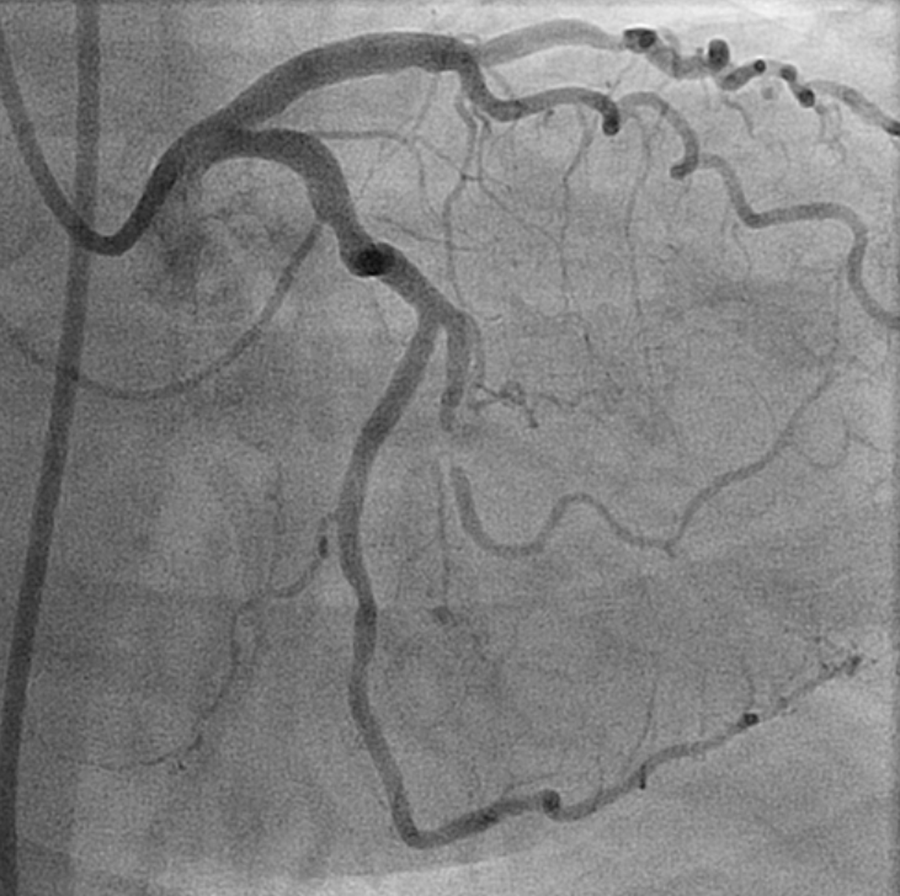 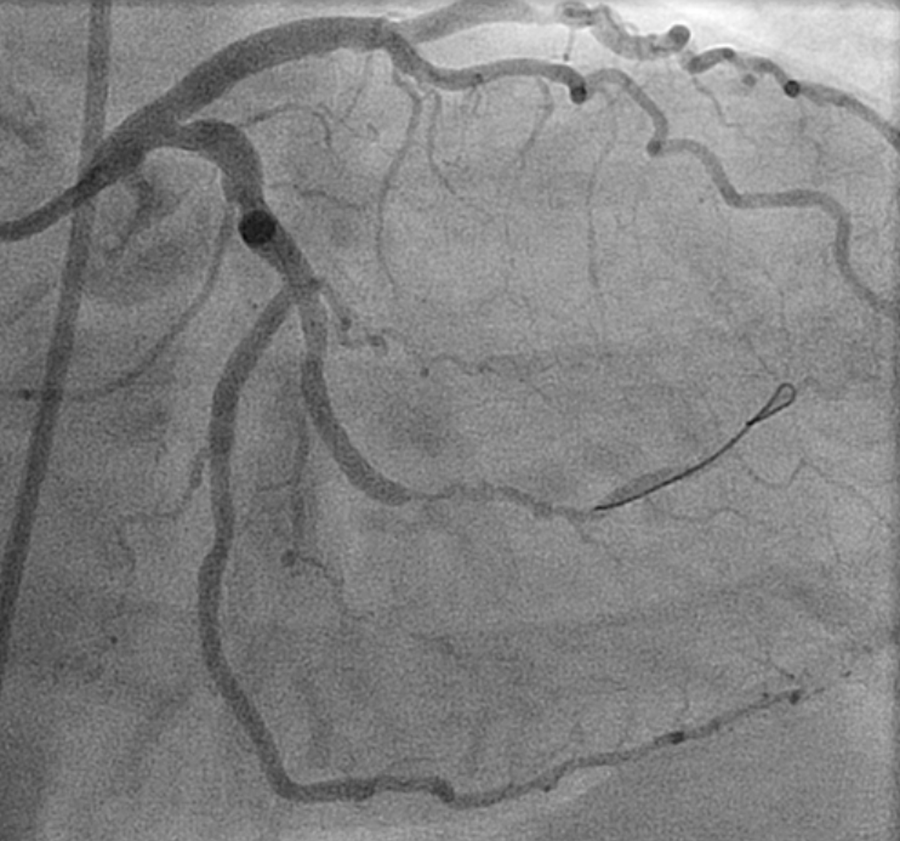 What should the next step be in the management to restore flow distal to the stent?

The correct answer is: C. Administer further dose(s) of intra-coronary nitroglycerin, nitroprusside, or a calcium channel blocker such as nicardipine

Guide-wire-mediated coronary spasm is an uncommon but well-documented cause of poor flow during catheterization. In this case, however, our patient developed significant coronary spasm at the edge of her coronary stent. This can be due to acute vessel recoil and can be induced by either the coronary stent or guide wire. In this case, 2 additional doses of intra-coronary nitroglycerin (200 mcg + 100 mcg) and taking time for the spasm to normalize (8-10 minutes) restored TIMI 3 flow in the vessel with excellent angiographic result and no need for further intervention (Figure 3 and Video 3). Guide-wire-mediated coronary spasm should always be considered in such cases because they can masquerade as other more serious pathologies such as coronary dissection. Coronary vasospasm was also probably responsible for the possible edge dissection seen in the initial PCI of the RCA, which led to placement of two additional coronary stents. However, intra-coronary nitrates could not be administered given that the patient developed cardiogenic shock in the setting of inferior STEMI. Hence, a hemodynamically stable patient always warrants a trial of nitroglycerin, nicardipine, or nitroprusside to rule out guide wire or stent-induced vasospasm before initiating treatment for more serious pathologies such as coronary dissection. Furthermore, taking the time to rule out coronary spasm if the patient is hemodynamically stable is always preferable because it gives time for the medications to work and prevents the operator from placing an unnecessary coronary stent. Coronary dissection should be considered as a possibility if further doses of intra-coronary nitrates and waiting an adequate amount of time do not restore flow distally. IVUS can be used to confirm guide-wire placement in the true lumen and evaluate the extent of the dissection. However, the use of IVUS in the small vessel in this case may also induce further vessel trauma. More recently, optical coherence tomography has been found to be superior to IVUS in detecting intimal ruptures and intraluminal thrombi.1

A stat consultation by cardiothoracic surgery for coronary artery bypass graft (CABG) may represent the correct choice in the case of dissection involving the left main coronary artery or if coronary perforation was demonstrated.2 Stable patients with coronary artery dissection limited to a single artery usually have a favourable outcome with interventional or conservative management, and CABG would not be the first option.3

Pulling back the coronary wire, though tempting to exclude wire bias or remove the possibility of wire-induced coronary vasospasm, should be avoided when dissection is a possibility given the disastrous consequence of losing wire placement in the true lumen.