A 30-year-old female presented to her local emergency department with 12 hours of right arm redness and swelling. Her symptoms started acutely while performing her usual daily swim for exercise. She had no other medical history and took no medications other than ibuprofen periodically for musculoskeletal pain. She did not smoke. On exam, the patient had normal vital signs including pulse oximetry. The right arm was noted to be diffusely swollen and ruborous. Motor and sensory function of the hand were intact, and radial and ulnar pulses were palpable. Laboratory studies were unremarkable with the exception of an elevated D-dimer. A musculoskeletal injury was initially suspected, which prompted a computed tomography scan. This study incidentally detected right subclavian deep vein thrombosis (DVT) (Figure 1). The patient was then transferred to a tertiary care center where duplex ultrasonography confirmed the presence of right axillary and subclavian DVT (Figure 2). 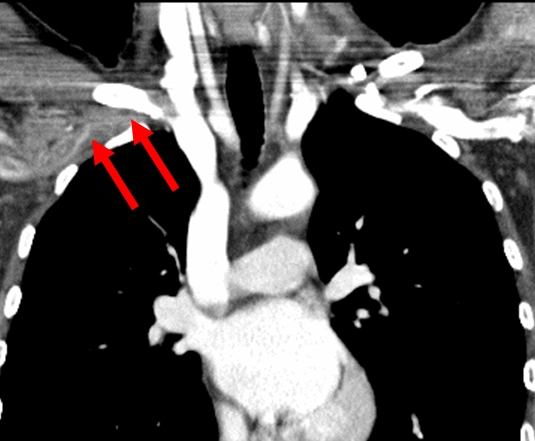 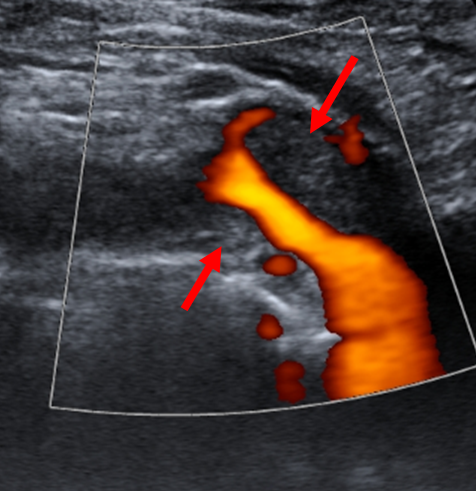 Which of the following is the best treatment option?

The patient presents with effort-induced thrombosis of the right axillo-subclavian vein, a syndrome commonly referred to as Paget-Schroetter syndrome. The clues to this diagnosis are the anatomic location of the thrombosis, the young age and relative health of the patient, and the history of exercise precipitating the thrombotic event.

Upper extremity DVT can be classified into primary or secondary forms, with secondary forms consisting of etiologies related to indwelling lines, malignancy, and/or hypercoagulable states. Paget-Schroetter syndrome is a primary form, and is postulated to be due to an abnormally "confined" outlet where the vein is subjected to forces of compression by adjacent muscular (e.g., anterior scalene and subclavius muscles) and bony structures (e.g., clavicle and first rib). The mean age at presentation is in the thirties, and there is a 2:1 male to female predilection. Activities associated with repetitive arm abduction such as baseball pitching and swimming are common associated precipitants.

Understanding that the patient presents with an anatomic problem that predisposes to DVT helps identify the correct answer. Answer A is incorrect. Anticoagulation should be initiated but this would not be definitive therapy as the outlet obstruction would persist and lead to a reasonably high likelihood of recurrent thrombosis. Additionally, these veins often have significant scarring and web formation from repetitive trauma which leads to severe stenoses. In this setting, anticoagulation may not be effective in restoring adequate flow to alleviate arm symptoms. Answer C is incorrect. Systemic thrombolysis is not indicated for most forms of venous thromboembolism with the exception of massive pulmonary embolism. Answer D is incorrect. In contrast to May-Thurner syndrome (iliofemoral DVT from iliac artery-on-vein compression), stenting is not recommended as empiric therapy for most cases of Paget-Schroetter syndrome. There is a theoretical risk that continued compression during arm movements can lead to stent fracture and/or restenosis from repetitive compression with resultant inflammation and mechanical trauma. Small series have reported high rates of early stent occlusion.

Answer B is correct. There are no randomized trials defining optimal therapy for this form of DVT. However, standard treatment involves initiation of anticoagulation, proceeding with catheter-directed thrombolysis to quickly lessen thrombus burden, and concluding by surgically decompressing the thoracic outlet. Observational studies suggest that this therapeutic algorithm results in the best chances of complete symptom relief and return to normal limb function.

The patient presented received catheter-directed thrombolysis followed by surgical outlet decompression. She was asymptomatic upon follow up, with venography demonstrating a widely patent vein (Figure 3A-B).

Figure 3A: Venogram demonstrating subclavian vein occlusion prior to initiation of catheter-directed thrombolysis. 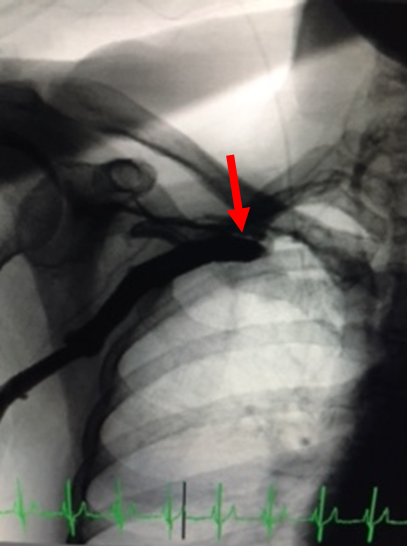 YOU ARE HERE: Home > Education and Meetings > Effort Thrombosis