Between a Rock and a Hard Place

An 85-year-old Caucasian female patient presented to the emergency department with complaints of shortness of breath and "almost passing out" with exertion that has been occurring over the last couple of weeks prior to admission. She had noticed progressive fatigue and shortness of breath for a few months but within the last couple of weeks had also had two episodes of pre-syncope with the most recent spell being an hour before arrival to the emergency department. The most recent episode was witnessed by her daughter who described her as appearing pale and sweaty in addition to appearing to be struggling to catch her breath.

The patient's past medical history was remarkable for coronary artery disease with a history of having a drug-eluting stent to her left circumflex 3 years prior for typical angina chest discomfort that could not be alleviated with medical therapy. She also had a 10-year history of type II diabetes mellitus, which was complicated by Stage IV chronic kidney disease. She also had a history of permanent dual chamber pacemaker placement for complete heart block that occurred 1 year ago. There was no history of rheumatic fever or other prolonged childhood illnesses.

She was a retired teacher who was a life-long non-smoker and non-drinker.

On initial examination, she was afebrile with a heart rate of 62 bpm, blood pressure of 136/68 (without orthostasis), a respiratory rate of 18 breaths/min with an oxygen saturation of 98% on 2 liters via nasal cannula. She was alert and oriented times 3. Her jugular venous pressure was 9 cm, and she had normal carotid upstrokes without bruits. Her lungs were clear to auscultation and percussion. Her cardiac point of maximal impulse was enlarged but non-displaced. There was a normal S1 and S2, a II/VI blowing holosystolic murmur at the left lower sternal border and apex, but there was no diastolic murmur appreciated. There were no gallops, clicks, or thrills noted. The remainder of her exam was unremarkable with the exception that her pedal pulses were reduced (1+ bilaterally).

The patient was admitted and ruled out for myocardial ischemia with serial troponins. The electrocardiogram revealed normal sinus rhythm with bi-atrial enlargement and left ventricular hypertrophy. A 2-view chest x-ray revealed mildly increased cardiac silhouette andpulmonary vascular cephalization but no alveolar infiltrates. Her creatinine was 1.6 gm/dL with a glomerular filtration rate of 17mL/min/1.73m2. Sodium level was 132 g/dL, but the electrolytes were otherwise normal. Complete blood count was normal. The following videos and image are from transthoracic echocardiography done the following day. 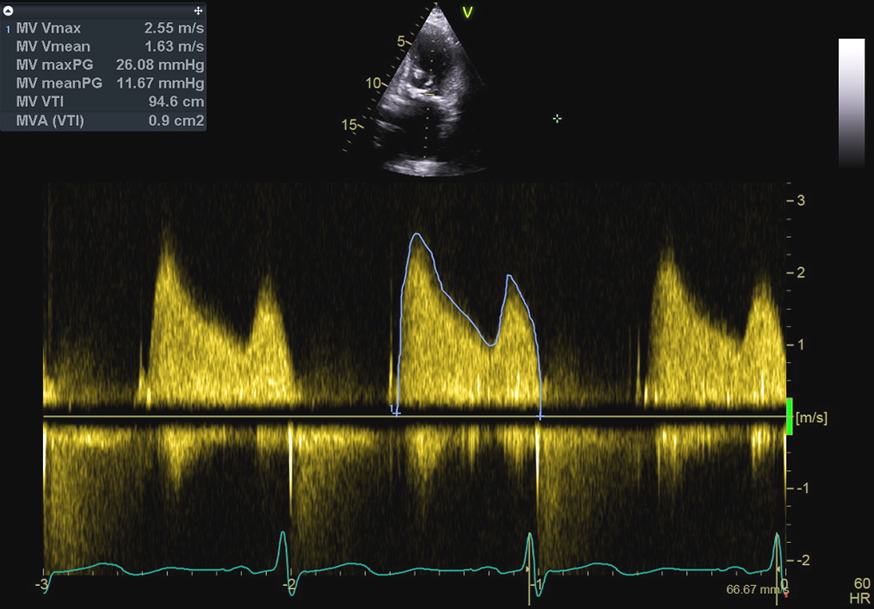 What is the most likely etiology of this patient's mitral valve stenosis?

The diagnosis of severe degenerative MS was further confirmed by three-dimensional transesophageal echocardiography with only mild mitral regurgitation.

A multispecialty heart valve team reviewed the case, and there were discussions regarding surgical and transcatheter mitral valve replacement with the patient and her family with appropriate discussion of risks and benefits of each approach. As part of the valve team discussion, the palliative care team also discussed expectations of the patient, management of the patient, and prognosis if no intervention was performed.

Due to the patient's strong desire to "never go on dialysis," the patient and the family opted for conservative medical management with a full understanding of her prognosis. She was eventually placed on hospice and died from heart failure 2 months later at her home.

The most common cause of MS worldwide is post-rheumatic valvular deformity. This is evident in the high prevalence of rheumatic heart disease in developing nations. With the increase in life expectancy and improved access to health care in developed countries, an increasing number of patients with degenerative MS are now being encountered.1 Many studies have reported the prevalence of degenerative MS, but the figure is variable. According to recent studies, degenerative MS may account for 12-26% of all MS cases. The Euro Heart Survey reported that degenerative causes of MS account for 12.5% of cases among 336 patients with MS as indicated by echocardiographic screening, and the majority of these patients (~74%) presented with severe, symptomatic disease.2 The prevalence of degenerative MS increases dramatically with age. The Euro Heart Survey shows the distribution of causes of MS according to age. Among the age groups of 60-70, 70-80, and >80 years, degenerative MS accounted for ~10%, 30%, and 60% of all MS cases, respectively. Age, white race, presence of coronary calcification, hypertension, diabetes, smoking, high serum C-reactive protein levels, and chronic kidney disease have all been associated with a higher risk of development of degenerative MS. Degenerative MS is also often associated with aortic valve stenosis.3

Classic echocardiographic techniques used for evaluation of mitral stenosis (pressure half time, proximal isovelocity surface area, continuity equation, and mitral valve area planimetry) lack validation for degenerative MS. Direct planimetry with 3-dimensional echocardiography and color flow Doppler is a reasonable technique for determining mitral valve area in degenerative MS.4 In degenerative MS, there is no commissural fusion as seen in rheumatic MS. The mobility of both the anterior and posterior leaflet tips is usually normal in degenerative MS, whereas rheumatic MS is characterized by restricted motion of the posterior leaflet.5

Although limited to small, case series reports, prognosis in patients with degenerative MS is poor; prognosis is worse in the aged and those with renal insufficiency, atrial fibrillation, and other concomitant valvular lesions. Renin-angiotensin system blockers and statins may confer a survival benefit, and digoxin use may be associated with higher mortality in these patients.6 Traditionally, surgical mitral valve replacement has been the method of choice for treating patients with symptomatic degenerative MS; however, these patients are usually elderly with multiple comorbidities that may adversely affect their candidacy for open heart surgery. Because of this, the mainstay of therapy in degenerative MS patients has been medical management with heart rate control and diuretic therapy. There is a need to develop an alternative percutaneous treatment approach for patients with degenerative MS who are otherwise inoperable or at high risk for surgery. Transcatheter approaches to mitral valve replacement have been reported,7 but there are no studies of long-term durability or outcomes with these methods to date.

YOU ARE HERE: Home > Education and Meetings > Between a Rock and a Hard Place