Evaluation of Chest Pain in a Young Woman

A 24-year-old female presents with intermittent chest pain described as pressure on both sides of her sternum, as though someone were pushing on her chest. This is accompanied by a sharp sensation that extends out toward the shoulder. It occurs intermittently every few days and is more noticeable with exertion, though it can also happen at rest. The pain is accompanied by shortness of breath, which resolves with rest. She also experienced two episodes of presyncope with chest pain and facial drooping during exertion a few months ago, which resolved without deficits.

Her past medical history includes iron deficiency anemia, depression, and unspecified vasculitis. She has been on steroids for the past 5 years, beginning at the time of right leg claudication, when she was found to have a distal femoral artery occlusion with extensive collateralization. A year later, she experienced right arm claudication and was found to have subclavian artery stenosis. Her symptoms have improved with treatment, though she reports ongoing leg cramping and fatigue, which limit activity.

Physical examination is notable only for borderline low blood pressure and a weak right radial pulse. An echocardiogram was normal with no resting wall motion abnormalities.

Which of the following is the next best step in evaluation?

The correct answer is: D. Magnetic resonance imaging of the aorta.

The patient's history of arterial stenosis and claudication improved with immunosuppression suggests possible Takayasu arteritis, and her aorta should be imaged with an MRI. The chest pain described is somewhat atypical. She is young and without traditional risk factors for coronary disease, but aortic inflammation could involve the coronary arteries. In addition, the presyncopal events are concerning for carotid disease.

Takayasu arteritis is a large-vessel autoimmune vasculitis that primarily affects the aorta and its major branches. 90% of patients are female, and most are in the third or fourth decades of life. It is a panarteritis, involving all layers of the vessel wall, and inflammation leads to scarring. Stenoses are most common, but aneurysmal disease can also be seen. This is a relapsing-remitting disease with high morbidity. Diagnosis is based on evidence of vascular or aortic valve disease, as well as associated findings such as elevated inflammatory markers and hypertension.1 There are no specific guidelines for management, but early use of steroids and other immunosuppressive therapy is encouraged. Surgical intervention should only take place in quiescent phases of the disease.2,3

In this patient's case, magnetic resonance angiography revealed wall enhancement, thickening, and stenosis of both subclavian arteries. Collaterals were present. The bilateral common carotid arteries, distal aortic arch, and distal aorta were thickened and enhanced, with tapering of the distal abdominal aorta. These findings were consistent with active aortitis. The patient was started on disease-modifying immunosuppressive therapy, with improvement in her symptoms.

If the MRI is negative for inflammation, and if there is ongoing concern for coronary artery disease, dobutamine stress echocardiography could be utilized. An exercise stress test is not an option given her leg pain and fatigue. Her symptoms are not suggestive of vasovagal syncope, so a tilt table test is unlikely to be helpful. Although some systemic inflammatory diseases are associated with myocardial inflammation that could be revealed by positron emission tomography imaging, her left ventricular systolic function is normal and she has no heart failure symptoms. 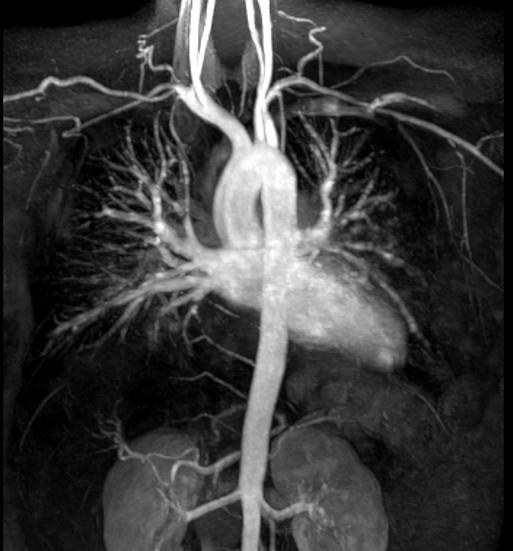 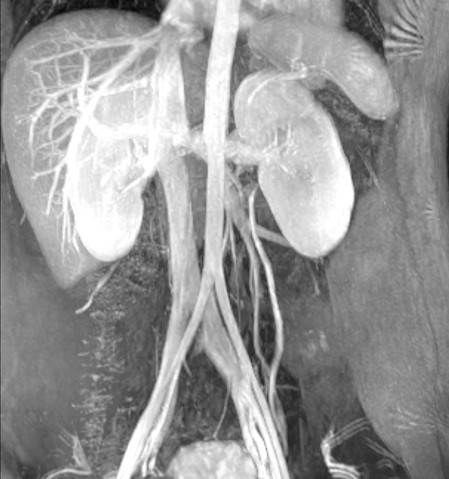 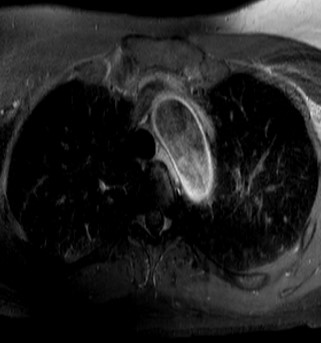 YOU ARE HERE: Home > Education and Meetings > Evaluation of Chest Pain in a Young Woman