Cardiac MRI delayed enhancement sequences in (A) 4-chamber and (B) 2-chamber showed patches of scar in the inferoseptal, anteroseptal, inferior, and basal anteroseptal walls.

Given the MRI results as well as the history of VT followed by 3rd degree AV block, a fluorodeoxyglucose (FDG) positron emission tomography (PET) (cardiac and whole body) scan was subsequently performed and showed a mismatch between perfusion and metabolic imaging to further confirm the diagnosis and provide an imaging reference for future follow-up. FDG images demonstrate intense focal uptake in the basal and mid segments of the inferior, inferoseptal, and anteroseptal walls and also moderate uptake in the RV free wall. Rest images with Rubidium-82 showed perfusion defects in the same segments, suggesting areas of scar (or impaired perfusion caused by microvascular compression, likely due active inflammation). The gated images showed a moderate to severe reduction (32%) of the LV ejection fraction (LVEF) (Figure 2). The whole body FDG PET scan showed multiple FDG-avid lesions in the lungs, mediastinal and hilar lymph nodes, as well as in the lumbar spine, iliac wings, and ribs that were compatible with active systemic inflammatory disease. An endomyocardial biopsy (EMB) was performed and revealed non-caseating granuloma. The diagnosis of cardiac and extra-cardiac sarcoidosis (CS) was made. A pacemaker/implantable cardiac defibrillator (ICD) was implanted, and immunosuppressive therapy was initiated with prednisone 50 mg daily. The patient was discharged and followed as an outpatient in a CS clinic.

Six months later, follow-up FDG PET imaging was performed and showed improvement in the LVEF (32-42%) and in the perfusion images (inferior and septal segments) as well as significant decrease in myocardial FDG uptake. The whole body scan showed interval resolution of FDG-avid mediastinal and hilar lymphadenopathy and no evidence of extra-CS. At that time, the patient had no cardiac complaints, and the steroid dose was tapered (Figure 3). 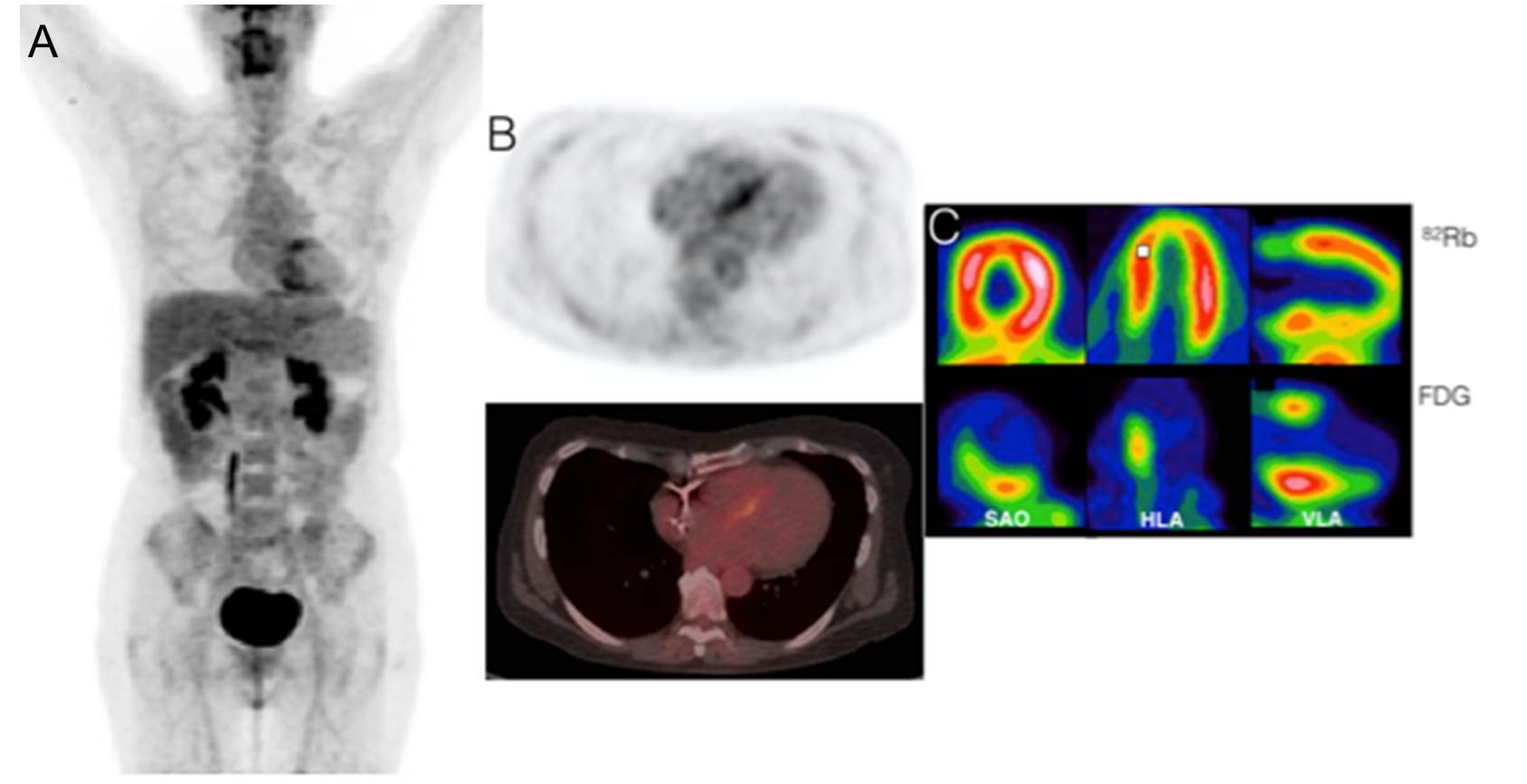 On follow-up at 21 months, device interrogation showed runs of nonsustained VT and paroxysmal atrial fibrillation. LVEF had improved to 51%. At 26 months, the patient had an appropriate ICD shock for polymorphic VT. One month later, another appropriate shock occurred. Medical therapy was adjusted. Subsequently, the patient has had no cardiac symptoms for 1 year and no VT on interrogation of her ICD (Figure 4).

Which of the following statements is MOST correct?

The correct answer is: C. In this case, ICD implantation is a Class I indication.

Answer A is incorrect for the following reasons. EMB is highly specific, but it has low sensitivity (20-30%)1 due to the focal nature of the CS, and typically extra-cardiac tissue is the first target due to the higher diagnostic yield and lower procedural risk. The procedure sensitivity can be increased when guided by electro-anatomic mapping or imaging (PET or cardiac magnetic resonance [CMR]). According to the Heart Rhythm Society (HRS) Expert Consensus,2 the diagnosis of CS is definitive when the presence of non-caseating granuloma on histological examination of the myocardial tissue is identified and no alternative cause is present. Table 1 summarizes the criteria for CS diagnosis.

The prevalence of isolated CS is not known, and its diagnosis can be challenging. The definition is also not clear. Kandolin et al. described 33 out of 55 patients (60%) who had what they termed "isolated CS," and their definition considered mediastinal lymph nodes as cardiac disease. In unpublished data from the University of Ottawa Heart Institute, the rate of isolated CS (which did not include mediastinal lymph nodes uptake) was about 5%. Up to 66% of the patients with isolated CS can remain undiagnosed after one EMB, and one third can remain without the diagnosis after the second biopsy.3 FDG PET guided-biopsy may increase its sensitivity.3,4

Answer B is incorrect for the following reasons. Heart block is a common presentation of clinically manifested CS because of the involvement of the basal septum by scar tissue or granulomas or involvement of the nodal artery.5 Nery et al. prospectively evaluated 32 patients aged 18-60 years presenting with unexplained 2nd or 3rd degree AV block and no previous history of CS in any organ. CS was diagnosed in 11 out of 32 (34%) subjects. Major adverse events occurred in 3 patients with CS, and none occurred in subjects with idiopathic AV block.6 In a retrospective registry analysis, Kandolin et al. reported that in 72 patients aged 18-55 years old with unexplained AV block, 25% of patients had CS (19%) or giant cell myocarditis (6%).7 The HRS Expert Consensus suggests that initial investigation of patients under 60 years old with unexplained Mobitz type II 2nd or 3rd degree AV block should include advanced cardiac imaging (CMR or FDG PET) to assess for CS and a computed tomographic (CT) scan of the chest to rule out pulmonary sarcoid. If one or more tests are positive, then biopsy confirmation should be the next step.2

VT has been reported as a first presentation of CS.8,9 A recent study screened patients with VT of unknown etiology for CS.10 After excluding classic outflow tract VT, fascicular VT, VT secondary to coronary artery disease and prior diagnosis of sarcoidosis, the included patients underwent FDG PET scans and EMB or extra-cardiac biopsy. Out of those 14 patients, 4 (28%) were subsequently diagnosed with CS.

In summary, FDG PET should be considered for detection of CS in the following situations:11

Answer C is correct for the following reasons. ICD implantation for CS is a Class I recommendation in patients with spontaneous sustained ventricular arrhythmias, including prior cardiac arrest and/or if LVEF ≤ 35%, despite optimal medical therapy and a period of immunosuppression (if there is active inflammation). ICD implantation is a Class IIa recommendation, independent of ventricular function, when CS is diagnosed and there is 1) already an indication for permanent pacemaker implantation; 2) unexplained syncope or near-syncope that is felt to be arrhythmic in etiology; 3) inducible sustained ventricular arrhythmias (>30 sec of monomorphic VT or polymorphic VT); or 4) clinically relevant VF on electrophysiologic study.2

MRI findings in patients with CS can vary according to disease progression stage and include regional wall motion abnormality, wall thickness, edema visualized T2 weighted sequences or fibrosis.5,14-16 Its accuracy is reported as 83%, and its negative predictive value can be up to 100%.14,17 MRI may also give prognostic information because the amount of scar is related to a worse prognosis.18,19 It is described as a predictor of death, aborted sudden cardiac death, and sustained or nonsustained VT19 and also has inverse correlation with LVEF.20 MRI cannot be done in patients with non-MRI compatible ICD and pacemaker leads, so it often cannot be used for follow-up. MRI and PET appear to provide complementary data with PET defining active inflammation and LGE MRI providing information about scar tissue formation and, to some extent, inflammation with T2 weighted images. Limited data suggest that FDG PET may be positive earlier.21 PET/MRI may enable the value of each modality to be realized in the same patient at the same time.22 Updated recommendations and standards for the role of imaging in defining CS and directing management23 are needed. Such guidelines are currently under development by the Society of Nuclear Medicine and Molecular Imaging Cardiovascular Council and the American Society of Nuclear Cardiology.

Answer E is incorrect for the following reasons. There is no guideline regarding the use of imaging methods to assess therapy response. However, individualized assessment with FDG PET appears promising. Osborne et al. analyzed 23 patients with CS who were treated with immunosuppressive therapies and were followed with serial FDG PET imaging. The authors found that a reduction in the volume or intensity of myocardial inflammation was associated with an increase in ejection fraction.24 Further studies are needed to better understand the role of serial FDG PET imaging in directing therapy.

YOU ARE HERE: Home > Education and Meetings > FDG PET for Cardiac Sarcoid